I will be the first to acknowledge that I can be an idiot (on occasion I’m the second, if Kris is fast enough to get there first).  It’s not generally something that I aspire to; it just happens.

In some ways it’s a blessing.

The underdog rarely disappoints. You’ve already been written off.  If people expect very little, you can rally and impress the shit out of them every now and then.

You can always do your damnedest to know what the hell you are doing, and even achieve something resembling complete competence from time to time.  However, the person who always knows what they’re doing is a rare breed.

More often than not, they’re wrong and they just think they know what they’re doing… which technically can still make them an idiot.  Furthermore, the rare individual who actually does know exactly what they’re doing all the time, oftentimes is obliged to be a complete asshole.  On the whole, I’m not sure this is an improvement over the idiot.

Of course, the worst combination would have to be the individual who is both an asshole and an idiot.

At times, the distinction between the person who knows what they are doing and the idiot seems worlds apart.

Someone who has an engine on their boat but only relies on it for dire emergencies, sailing onto and off of anchor; sailing through tight squeezes; even patiently sitting and going nowhere when there is no wind; is truly a competent sailor (I know some of these people, though I certainly do not sit among them yet).  They obviously know what they’re doing and they get it done, no matter what the circumstances.

Conversely, someone who has an engine on their boat and relies on it whenever they are unable to achieve six knots of speed, under sails alone, is an idiot (I know one of these people as well).  They are not really a sailor; but rather, a motorer… or, ewww… a failor.

Other times, the line can be finer.

Is the person who chooses not to utilise their engine, voluntarily subjecting their sails and gear to excessive and unnecessary wear and tear solely out of principle, more a truly competent sailor or an idiot?  Not such a clear distinction, in that case.

Probably a moot point, if you know what you’re doing… you’d make the necessary adjustments so you could still sail effectively while minimising equipment wear… damn.  I hate whomever is telling me how that is done right now… you’re probably an asshole who knows everything.

As we were en route to Swan Island, I felt beaten.  Despite having tried everything we could think of, we had been unable to sail nearly as much as we felt we should have been able to.  One the of log entries reads “I give up… turning on the engine.”

Sure… someone could have figured out what needed doing; but, that someone sure as hell wasn’t on our boat that day.

Consequently, we ended up running the diesel engine for nearly a third of the two days it took us to get to Swan Island.  Even with the engine running, we only managed to average 4.8 knots during that leg.

The most noteworthy aspect of the first day was a visit from another temporary hitchhiker.  Just before sundown, a bird we later identified as a Brown Noddy landed on our dinghy, which was secured to the davit and stern arch. 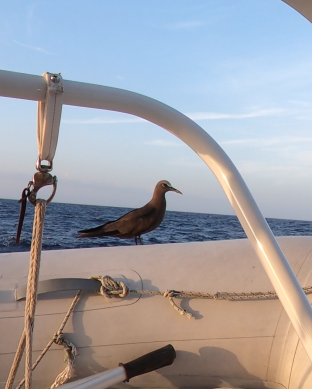 The bird carefully stood there, leaning back and forth constantly to counterbalance itself in rhythm with the rolling of the boat.  Eventually, it tucked its head under its wing and appeared to enter a rather Zen-like state of both balance and sleep.

Twelve hours later, as the sun appeared over the swell of the eastern horizon, that crazy bird was still perfectly balanced on the buoyancy tube of the dinghy, just where it had settled in as the previous day’s sun began to set.

It flew off shortly after sunrise, disappearing into the background of gently rolling waves.  Swan Island seemed like the most logical destination, given its proximity, though our silent hitchhiker appeared to be headed more in the direction of Mexico’s Yucatan Peninsula… maybe bound for Cancun… just teasing us to follow.

We had already joked that, if the damn wind wouldn’t cooperate, we might yet end up at Cancun ourselves.  But, for now, we were still shooting for Honduras.

When we arrived at the tiny smidge of land known as Isla de Santanilla (or Swan Island), the conditions seemed pretty favourable towards spending a night at anchor there.  Winds were ten to fifteen knots, making the wave action minimal, and we were able to find a spot that kept us protected from the incessant swell that seemed to wrap around the island.

However, the wind direction meant there was no way for us to get into the small bay which allowed access to the Honduran Navy outpost, comprised of one officer and a few enlisted men (the island’s only inhabitants).  Apparently, they fancy showing visitors around the island, including a visit to the only other buildings on Swan Island – several cement foundations which are rumoured to be the ruined CIA remnants left over from a Nicaraguan Contra staging area.

They seemed rather unconcerned after we identified ourselves over the VHF and explained our reluctance to enter the bay, given the wind direction.  As long as we were leaving in the morning… no worries.  Just give ‘em a call in the morning to announce our departure.

So… for an afternoon and evening we had an uninhabited bay all to ourselves, the only boat on the whole island… over a hundred miles from the next nearest land… with nothing but ocean behind us if we had to pick up anchor.

In the morning we considered staying an extra day to attempt getting ashore, but we simply could not find a viable alternate anchorage.  In the end, we had to be content with the overnight stop, and a radio conversation with the Honduran Navy radio operator.

Without the option of getting ashore, it made more sense to press on towards the Bay Islands… hopefully the smaller island of Guanaja if all went well.

More than the slightly different isolated conditions, it seemed that there was a much more profound impact resulting from the fact that we, simply put, seemed to get our shit together.

Sometimes a much easier situation to overcome.

For nearly twenty four hours, under only power of engine, we averaged 6.2 knots… quite the turnaround.

As we flew along through the darkness of the night under an unbelievable canopy of stars, at times exceeding eight knots, it was pretty crazy to realise that we were directly over the Cayman Trench, with over eighteen thousand feet of ocean separating us from the bottom.

We were quite entertained when, as we got into the wee hours of the morning, it became apparent  that we needed to rein in our speed to avoid arriving at Guanaja before sunrise. Hours later, the sunlight of a new day seemed to help tame the boisterous seas around us.

In front of us stood the lush green island of Guanaja. 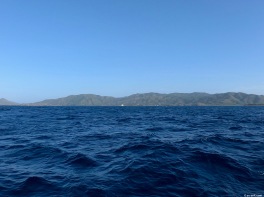 We were immediately reminded of Jamaica.  Not quite as mountainous, but still an inviting mass of green tropical jungle jutting up from the ocean, rather than a barren scab of desolate rock barely holding itself above the waves.

We had not had a chance to get ashore at Swan Island; it was really nothing more than a tiny military outpost anyway.

As we passed through the cut in the reef approaching Guanaja, we got our first real glimpse of one of the truly unique communities in all the Caribbean.  A tiny island, just off the main island, comprised of houses and buildings almost entirely built on stilts with a population somewhere between five and ten thousand people… Bonacca. 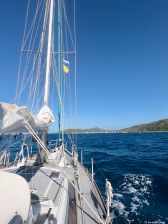 The Venice of Honduras? 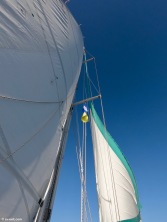 This was Honduras.  A new country… a new adventure.