For a change, it seems that we are actually in front of the pack.

We officially entered into quarantine status here at Bocas del Toro late afternoon of March 19, 2020, effectively being granted at least a temporary sanctuary.  It is now April.  The last time we were ashore was March 13, when we picked up our spear guns and duty-free alcohol just before departing Grand Cayman.  For the past fourteen days, we have not been outside a two hundred fifty foot diameter circle… the total scope of our swing here at anchor in the North Anchorage of Bocas del Toro, Panama.

Fourteen days composed of minor variations within a static picture.

Morning current… stern to the south 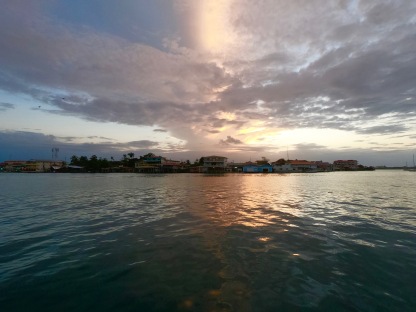 What had started off as only two boats in quarantine, S/V Exit and M/V Sprezzatura — only recently acquainted by voice over the VHF as the result of being in the same bizarre circumstance, had now evolved into an entire anchorage and community, actually an entire globe, essentially in the same quarantine situation.

Over the course of two weeks, it has been staggering to witness how the coronavirus has influenced the quickly shifting policies and perspectives, both globally as well as locally, here in Bocas del Toro.

It’s hard to describe the feelings and emotions you experience when you are absolutely uncertain whether your current sense of security is nothing more than a fleeting moment.

Sure, things can go to shit at any time for anyone (the cliche strike from either a lightning bolt or passing bus)… but a general assumption that everything will remain at least somewhat consistent for the immediate future is pretty much a requirement for anyone  even attempting to cope with the actual uncertainties of the world… if that makes sense.

When that security is merely a moment to moment reality, rather than a foregone conclusion, it changes everything.

We spent two days hoping we were actually in “official quarantine status”, which was what we had been told.  In actuality, we genuinely expected the Navy boat to roll up again, at any moment, with angry people holding guns.

The morning after our return to the anchorage, the Navy boat did actually show up at M/V Sprezzatura, asking what they were doing back again… a moment of high tension…

It turned out the Navy’s morning shift hadn’t been briefed regarding all that had transpired the previous afternoon, and were lacking the current intel that we were on an “authorized to anchor” status.

Keeping track of weather, monitoring the border situations in other countries (not just nearby countries that might offer alternative destinations, but also a more global awareness of what trends were taking place that could change existing policies), trying to sort out our transmission issue and making sure everything else mechanical was in good maintenance standing, looking at our existing provisions and inventories aboard from a longer term perspective of resupply uncertainties…  all things currently in the mix.  If we found ourselves being forced to keep moving, these factors would all come into play.

Not to mention trying to keep up with other peoples’ stories… family, friends, other people dealing with the same situation… not so different.

With each new day came international news updates.  More and more countries were closing their borders.  Some, like Galapagos and French Polynesia, were not only denying entry to boats, they were kicking people out who were not citizens or residents.  If you had just arrived, after weeks at sea, you were allowed only to top up your fuel, water, and food; you then had to continue on.  If you were already there, leave on the boat or leave the boat.

The possibility seemed very real to us that, during fourteen days (quarantined or not), a country may very well change its policies regarding outsiders.  Even after completing our two week isolation at anchor, after confirming no health issues exist, we could easily be told our cruising permit was being denied.  In that case, we would have to leave.

On our third day at anchor, when the Navy boat bombed up alongside us late in the afternoon, our initial reaction was… oh, shit.  When they asked if all was okay… were we good?  That seemed like a shift of the tides.

The following morning an announcement was made, on the net, that a 9pm-9am curfew was in effect for all of Panama.  People were being told everywhere on the planet to stay home… isolate.

A day or two later, the curfew was changed… 5pm-5am.

A few days after that it became twenty two hour lockdown.  Based upon the last digit of your passport number corresponding to a specific time on the clock, everyone (citizens and visitors alike), had one hour to be out and about with thirty minutes on either side to commute.  Other than that… social isolation.  Everything was closed except for critical businesses and agencies.

Nobody out after dark.

And then they stopped selling liquor.

Then individuals were limited one hour out, still corresponding to your passport number, but only three days a week – Monday, Wednesday, Friday for women; Tuesday, Thursday, Saturday for men.  On Sunday, nobody was to be out.

Over a dozen cruise ships were currently stranded at sea with passengers aboard, looking for ports that would accept them.

The entire world was entering into quarantine… it seemed ours had just started a bit earlier.  For once, we were ahead of the world; and you don’t hear that very often at all, on a sailboat.

Still, the true precariousness of our situation was very sobering.

If we were told we couldn’t remain here, our options were extremely limited.  Nicaragua, Mexico, and the U.S. may be the only countries along the entire east coast of North, Central, or South America as well as most of the Caribbean allowing boats into their waters… today, that is.

This didn’t even address the possibility that those countries still currently allowing outsiders to enter could very well be a future coronavirus hotspot.

Over the course of our fourteen day quarantine, we were quite surprised to see three other boats arrive with yellow “Q” flags hoisted.

With each new arrival, we found ourselves experiencing very mixed emotions.  On one hand, it was relief and happiness.  We too, knew what it felt like to arrive and not know if you were going to be allowed to stay.  We wouldn’t want to wish anyone the misfortune of being refused entry to safe harbour.  At the same time, what did this say about our future?  Would we ALL be processed after the quarantine?  Would we slip under the gate, while the other boats found themselves with only temporary refuge?  Or, the worst possibility… were we ALL gonna get tossed out after our two week isolation period.

Globally, things looked like they were getting more and more uncertain.

During the month of March, the number of confirmed coronavirus in the U.S. alone had swelled from eighty eight to over one hundred seventy thousand.

The U.S. had just publicly estimated “best case” estimated fatalities in the 100,000-250,000 range.  Though China and Italy looked as though they could be on the descending part of the curve, over the next two weeks, things were going to get much worse before getting better for a large part of the planet.

Sure… assholes like Rush Limbaugh were still spewing bullshit conspiracy theories that the Democrats and Communists were behind the entire situation.  But, most people, at least those who weren’t making a shit ton of money or had at least some sensibility, saw this for what it was – a serious health threat.  Not a hoax.  Not a political maneuver.  Not a business opportunity.

We fully realized that, if Panama locked things down any tighter, we’d be fucked for sure.  But, given the situation, we also couldn’t ask for a much better location to let things play out.

For now, it was the same for everyone.  Wait and see…

Then… on what we calculated as the thirteenth day of our quarantine, two rather unbelievable things happened.

First, we had a conversation from deck to deck with the captain of a sailboat that had been towed into the anchorage the night before.  They were flying a “Q” flag.  Apparently, this was the mystery “third boat” from the 19th of March.

Thirteen days ago, they were entering the channel just as Exit and Sprezzatura were lifting anchor (after having been delivered a 10 minute countdown and told to leave the country).  We hadn’t noticed them just in front of us before we altered course away from the channel as we tried to sneak away into the bay, awaiting further news from Fabian.

Now, from the deck on S/V Manna, the captain yelled over that they too had been denied entry right after seeing us turn but, instead of following us, they had turned about and headed back out of the channel.  We never knew they were there.  Three hundred miles later, as they tried to make for Florida, their transmission died.  With no motor, they turned back, with the wind, toward Panama, and headed south until the wind eventually died.  Finally, thirty miles outside Bocas del Toro for the second time, it took twenty four hours before the port captain granted permission for them to enter!  Once again, it was the amazing Fabian whose negotiating prowess had moved both earth and sky to secure this.  They were now apparently being granted permission anchorage for only long enough to secure repairs on their transmission.

We learned they had left Jamaica on Friday, March 13… the same day we had left Grand Cayman.  Neither of us had been ashore since that day.  At least we had been at anchor for the last thirteen days and not out at sea.  Holy crap!

The second unbelievable thing… we actually received a call on the VHF during the afternoon from the port captain. Amid a long string of incomprehensible sentences spoken in Spanish at light speed, we gathered that their math had, indeed, agreed with ours.  As far as we could tell, a doctor/health official was to visit both Exit and Sprezzatura sometime in the morning to assess our health.  If we pass the test, we believe they will tell us:  “now fuck off, and get out of Panama…”

No… we hope that is not the case.  We shall see what unfolds exactly as it unfolds.  No previews here.

Anyway, it looks like we made it to the next elimination round, whatever that means.

It has occurred to me just how ironic it is when, in many ways, our quarantine status could be described as, essentially, an additional two week passage at anchor.

Living aboard Exit full time, our life already more or less follows (or at least parallels) a permanently self-imposed semi-quarantine status.  As far as reliance on the world of dirt, we already strive to be as completely off the grid and self-sufficient as possible — a daily way of life, rather than a temporary inconvenience.

Involving the outside world, or venturing into the outside world, often creates a complicated sequence requiring much more time and logistical navigating than ever before.  Furthermore, just needing something does not guarantee access or availability.

In a way… welcome to our everyday world.

The ability to go a month without having to set foot ashore is something we aspire to.

That having been said, it is nice to at least have the option to at least get off the boat…

How does one occupy time during a fourteen day quarantine at anchor? 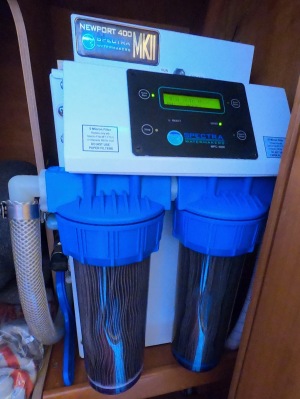 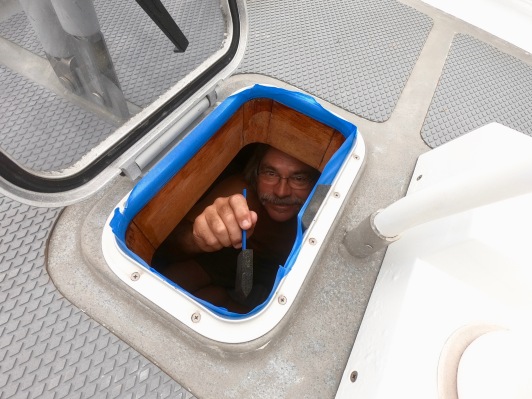 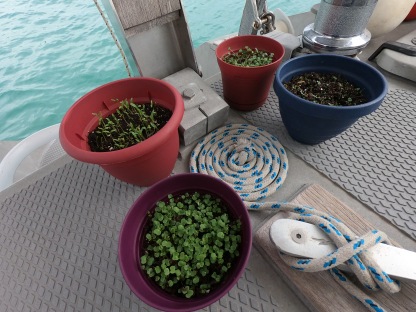 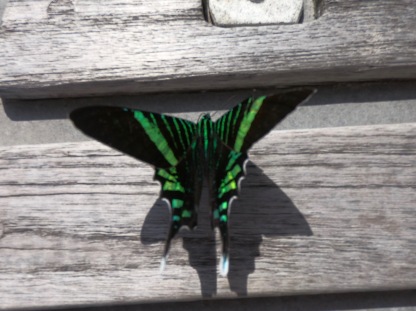 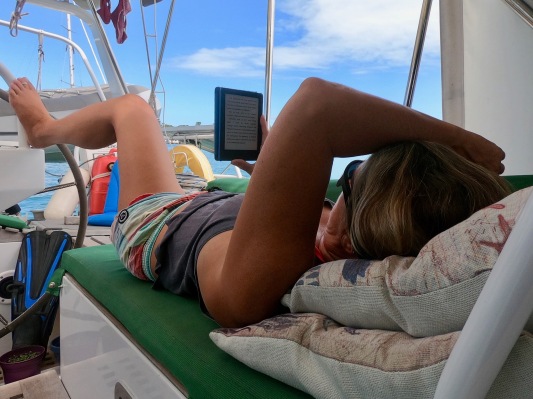 Hey… is that allowed?

Alright.  That one does deserve an explanation.  On only day three of our quarantine, I was already starting to show possible signs of mental instability and/or resourceful creativity.  Just a hair north of nine degrees of Latitude, snowballs only come from… defrosting the refrigerator.

One thought on “Quarantine… A Two Week Passage At Anchor”