I’ll have a blue Christmas without… wind.

For us mere mortals, there should be solace in the knowledge that even the best get it wrong sometimes.

… all give added credibility to a best guess.

It was pretty dreary the day that we left Fronteras.  The plan was to anchor in El Golfete for one last night or two before heading to Livingston.  The wind was from a great angle and, had there been more than a half a knot, the sailing would have been phenomenal.  Another day of freshwater motoring…

We took the Mothership on one last trip up the small river past Laguna Salvador, and  anchored in the same spot we had discovered before for a couple of nights.  Chris Parker had said things offshore would be pretty stinky — nine to twelve foot seas — for a couple of days following a cold front that had passed through, but that would still leave time to catch the tail end of the weather window that could take us all the way to the Caymans potentially. 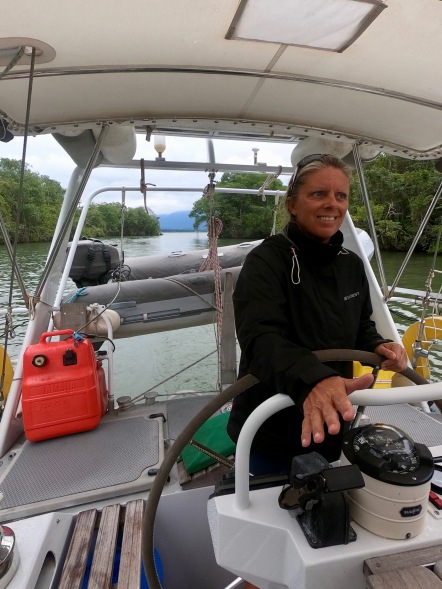 And then, after a couple of days, it was time to leave El Golfete, head back down the Rio Dulce, and clear out of Livingston. 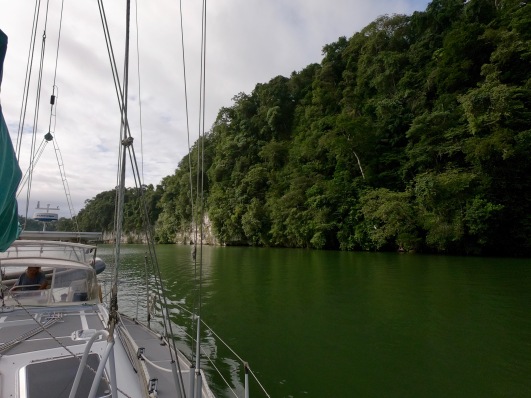 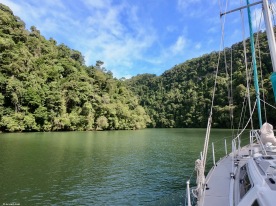 Clearing out at Livingston proved to be a cinch, just like clearing in, since we had used local agent Raul.

We assumed getting back across the shallow sand bar would be no problem.  We would be following the exact track we had laid down on our chartplotter when we came across the other way.  Imagine our surprise when the depth indicator suddenly dropped like a rock and displayed 3.6 feet.

Ahhhh… kissing the Livingston sand bar on the way past…

Obviously the shoaling had shifted over the past two months, and we found ourselves  barely getting over the Livingston bar.  Eeeek!

With this drama resolved, we eventually realised our wind direction/speed indicator, located on top of the mast of course, was not working properly.  The paddle wheels were spinning but the wind vane appeared to be frozen in place.  The wind direction was stuck head on and both the true and apparent wind speed displays were incorrect .

Not the end of the world; but not ideal to start a potentially five day offshore passage.

After a brief discussion, with less than an hour of daylight now remaining, though unprotected from increasing winds and the swell which was building as it crossed the bay, we decided it would be more comfortable to sit out the night here at anchor, rather  than to try to go up the mast before morning.

We bounced around quite a bit that night.  Not bad… but not great.

On the up side, at least the swell had calmed down quite a bit by morning when I went up the mast.  On the down side, going up the mast made no difference, and the indicator was still not working by the time I came back down the mast.  Just have to go old school… finger in the air.

And I’m not gonna lie.  Not a fan of the windy-swelly conditions mast ascension.

I have heard some pretty scary stories that this doesn’t compare to.  And no, it doesn’t look that wavy; but I watched swells touch the deck on the bow three feet above the waterline.  And yes, the motion was more hobby-horsing forward and backward than rolling from side to side, which would have been far worse.

Don’t matter, me no likey. 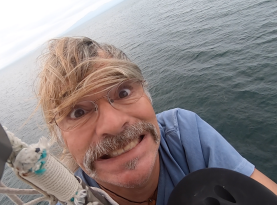 62′ up the mast at anchor in wind… with Trump hair

Next time, it’ll sure make going up the mast in pond-like conditions a breeze…

And speaking of breeze…

Almost as soon we got around the Cabo Tres Puntas peninsula, the wind seemed to be coming from the east instead of the forecasted north to northwest wind we expected.  And then it started dying.

… the cays of Belize in the distance… no wind.

Cays of Belize in the distance

Instead of bailing out immediately, we hoped that this was a local or temporary situation, and things would improve shortly.

As we motored forward, it slowly became apparent that this was not something that was a bit off in schedule — a little ahead or behind.  It was more than a bit off in overall forecast.

The prediction of sustained northern winds simply never materialised.  The system had collapsed after only a day.

Option one:  turn around… which sucked.  Option two:  motor four or five days to Grand Cayman… which sucked.  Option three:  change course, head for Belize, and cough up the US$300 to clear in… better than the first two options.  Option four:  motor overnight, if necessary, to Utila and clear in to Honduras for US$3 each… I think we have a winner.

And so our ambitious endeavour, to sail from the Rio Dulce all the way to Grand Cayman in one swoop, disintegrated.

As an extra lump of coal in our Christmas stockings, we didn’t even get to shut down the engine on the way to Utila for more than two hours.   Any wind over five knots remained right on our nose, from the east.  And any prospect of tacking slowly back and forth under sail through the night was made quite unnerving by the fact that we were in a busy cargo shipping lane.

By coming around the north side of the island, we delayed our arrival to Puerto Este (East Port) until after sunrise.  We knew exactly where we were planning on dropping anchor; still, we weren’t sure how busy the bay would be.

A gloomy Utila arrival Christmas morning (the photo almost looks black and white) revealed to us that there was only one other boat at anchor in Utila… unbelievable. 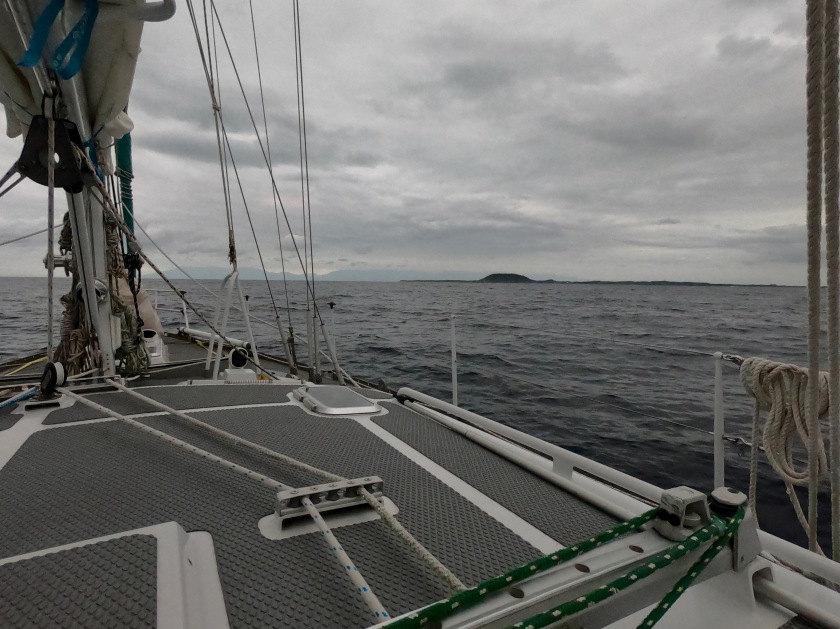 A Christmas serenade to Kris after setting anchor seemed in order…

Before a 2019 Utila Christmas sunset and fireworks show… 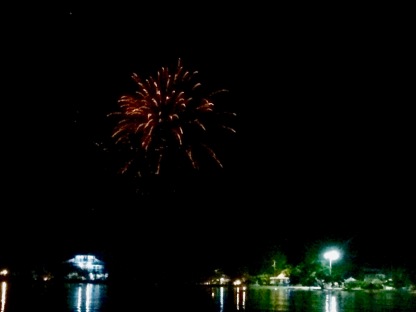 And, the day after Christmas, sunrise over Utila.