To get to Cape Cod, we decided to motor through the Cape Cod Canal rather than sail back in the direction from which we had just come and navigate all the way around the outside of the Cape.

A minimum of one or two hours of engine use during the thirty miles between Buzzards Bay and Provincetown, via the canal, made far more sense than the nearly two hundred mile sail all the way around the outside (still one hundred thirty miles if you were daring enough to thread the needle behind Martha’s Vineyard, Nantucket Island, and Nantucket Shoals).

From Onset, the key was to time our departure to coincide with favorable currents.  The ninety minute trip through the canal was only possible for us if we were traveling with the current, which exceeded a staggering four knots in the most constricted spaces of the canal.

There was a two hour time limit to complete the passage, turning around was not allowed, and sailing was prohibited… rules established and enforced by the patrolling Canal Control authorities.

Dena and James were already underway (as was always the case – I am not known as an early riser by any stretch of the imagination) by the time we started to pull up anchor.

Aside from the hard left hand turn we had to make into four knot currents from a very narrow channel to get into the main channel leading to the canal, and a large barge coming from the opposite direction once we were inside the canal which through up a wake that still had us bouncing around on confused waves for many minutes after it had passed, the journey through the canal was without drama. 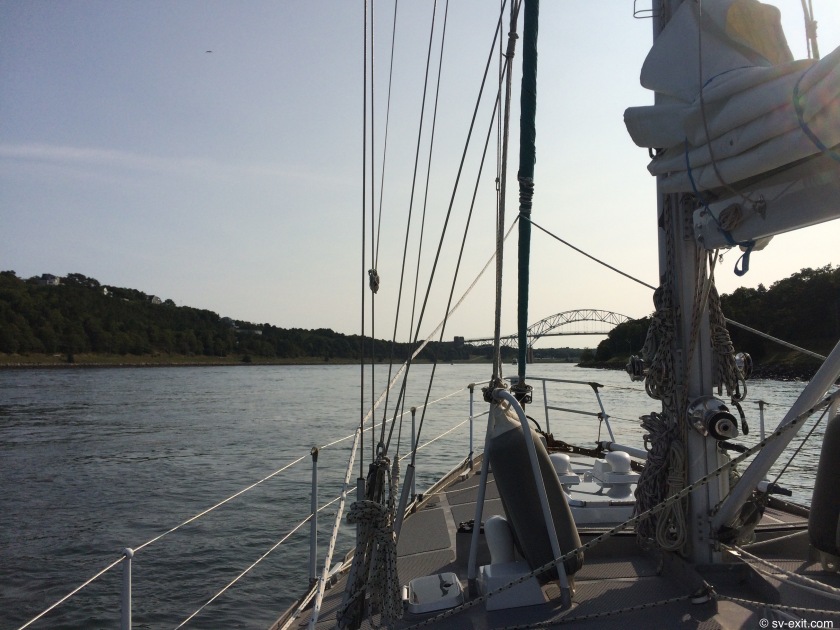 The most exhilarating part was the speed we were traveling at.  Though we were forced to motor through the canal, the favorable current we were riding on had us zipping along at between nine and ten knots of speed in places.

When we reached the other side of the canal we had officially made it to Cape Cod Bay.

We could see Dena and James not too far ahead.  Nomad’s sails were already up.  They hate using their engine even more than we do (Dena would not so affectionately refer to it as the infernal combustion engine).

Our own wind speed display indicated less than five knots of breeze to work with, but we had plenty of time to cross the bay to reach Provincetown by sunset.  We were already tired of listening to the drone of the engine so we turned into the wind, got up the main, unfurled the genoa, and shut off the engine.

As is so often the case, just as we finished getting the sails up, the wind died off even further.  It was now less than two knots and our forward movement had all but ceased.

In an absolutely classic moment, the radio crackled to life with James’ voice.

“Exit…Exit…Exit…this is sailing vessel Nomad.  You appear to be dead in the water.  Can we offer any assistance?”

With a smile I replied, “Nomad…Nomad…Nomad…this is sailing vessel Exit.  This is how fast we go when there is no wind.”

After a brief silence, James voice came back over the speaker with a chuckle, “Oh… we’re running our engine.  You guys are our heroes.”

Needless to say, within about five minutes we had the engine running and ended up motorsailing for half an hour before the winds creeped above five knots, allowing us a quiet five hours of sail time and a brief deck to deck conversation as we eventually caught up to Nomad.

We crossed Cape Cod Bay in about six hours, reaching Provincetown, which is tucked just under the curl at the very tip of Cape Cod, by mid-afternoon.

They have converted the entire area around the main docks to mooring balls, which are either private or have to be paid for to use; but we were able to find a spot on the west side of the bay with fifteen feet of depth, good holding, and plenty of space.

It made for about a ten minute dinghy ride each way… oh well.

As we were setting the anchor, we realized the boat next to us was aluminum.  Though we don’t purposely seek out other metal boats, we find a disproportionate amount of time that we are in the same anchorage, we end up near each other… a strange coincidence.

Even more strange was a third aluminum boat and a steel trawler which anchored next to us over the next couple of days… metal heads unite!