One particularly satisfying aspect of pushing farther south, after departing Staniel Cay, was that the population of Mega-twats seemed to immediately began to dwindle.  They quickly became farther apart and fewer in between… YES!

With less than seventy nautical miles to reach George Town, we could make it in two days.

However, we decided to break the final stretch into a few smaller sections and really try to enjoy the fact that we could drop anchor at a new location after only a couple of lazy hours on the move to enjoy a different view for a short while.

Black Point, on Great Guana Cay, was quite a busy anchorage.  Lots of boats had the same idea that its large bay would provide good protection from a bit of a windy stint forecasted to blow through over the next couple of days. 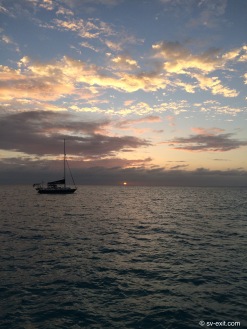 We went ashore and walked through a very sleepy, though friendly, town that took less than half an hour to get from one side to the other.

Loraine’s, a restaurant run by a Bahamian woman who was also a Seven Seas Cruising Association member, was hosting a weekly all you can eat buffet for cruisers that we decided to stick around for.

We saw people there we had met earlier as well as met a number of cruisers that we would see again and again as our paths continually intertwined.

Jay and Tami, cruising aboard their catamaran Avighna, were two such people.  Sitting next to them at dinner, we struck up a conversation that came to be the start of a great friendship.  They offered an immense amount of advice and information, both regarding sailing in general as well as potential places to visit, as they were coming from the south and had already been in the Bahamas for over six months.

Their southern accents (Tami from Louisiana and Jay from New Mexico) were quite pronounced and, over time, we found that they had managed to infuse our own vocabulary with regular use of the word y’all.

Once the winds had settled down a bit, we picked up anchor again and continued heading south.

Bay Rush Bay, also on Great Guana Cay, provided a great secluded anchorage that we had all to ourselves for a night, as did Rudder Cut Cay, just ten miles further south. 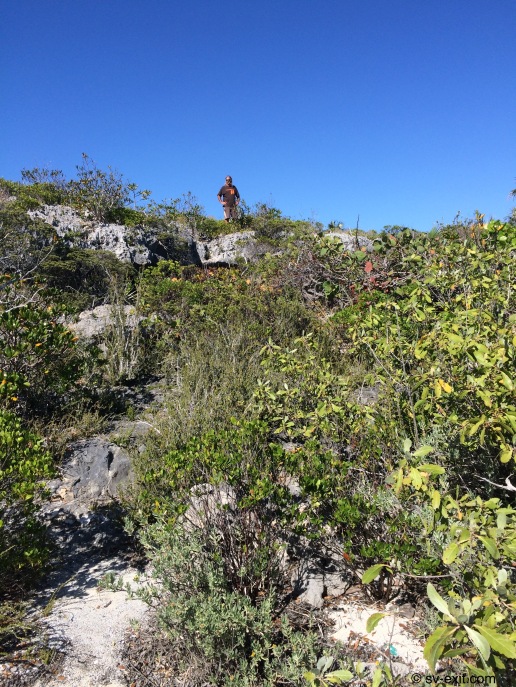 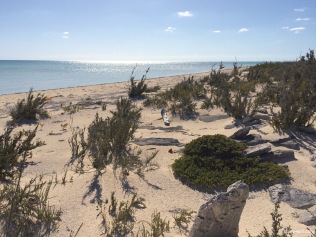 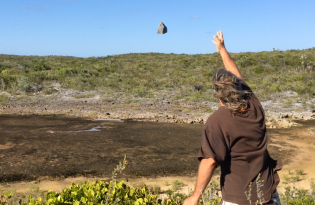 En route to Rudder Cut Cay, we passed by David Copperfield’s private island resort, which apparently can be rented out for something like $300,000 a week.  We opted to pass on that.

Though we had a small bay at Rudder Cut Cay completely to ourselves for a day, the second day four other boats showed up and invaded the space around us. 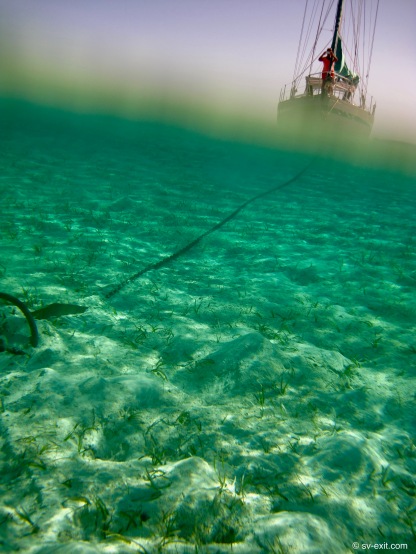 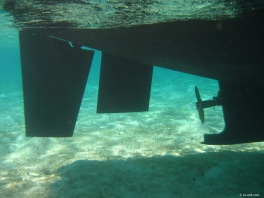 On our third day there, we were sitting in the cockpit relaxing.  Suddenly, the unnerving screams of a female screaming for help cut through the air like a razor blade.  We looked around and saw what looked to be a snorkeler a few hundred yards away from us.  As the screaming continued, we quickly began to lower our dinghy, which was lifted out of the water on its davit and secured to the stern arch with four separate lines.

Even more unnerving than the screaming, was the silence that immediately followed as we desperately tried to free the dinghy.

Fortunately, a man on one of the catamarans anchored further inside the bay had also heard the screams and  jumped in his dinghy, which was already in the water.  He reached the girl a minute or so before we did.

As it turned out, he was the father.  The girl had gone snorkeling alone in a bay just around the corner and had encountered some current going in the other direction.  Struggling to get back, she had panicked and began screaming for help.  He assured us she was only shaken up and everything was fine.

As we headed back to our boat, our heart rates finally began to drop back down to something approaching normal.  We both looked at each other shaking our heads with only half a smile, joking that we thought we had left the shockingly stressful near death rescues behind when we gave up our management jobs at Scuba Junkie in Borneo.  It was good to see that we still had the ability to react quickly when necessary, though we were less than pleased to have been tested.

The following day we were more than ready to lift anchor and move on.  Once again, we were blown away by the shades of blue that the water took on.

For the previous two weeks, we had been just creeping along.  Our past five anchorages had been no more than dozen miles from one to the next, so we decided to push the final forty miles that remained to George Town all in one go.

We had mixed anticipations about George Town.

For many, it is the end of the line heading south in their Bahamas adventure.  Some head straight here, drop anchor, and don’t pick up anchor again until the end of the season when they head home.

We knew it would be pretty heavily populated with boats which, on one hand, potentially meant a lot of congestion to deal with.  On the other hand, this also meant George Town was well equipped to deal with large numbers of cruisers, with good facilities for fuel, provisions, and entertainment.  It was also the only place we found in the Bahamas that offered free water for cruisers at the dinghy dock… cheap and convenient.   Most places charged twenty five to fifty cents a gallon.

We were arriving pretty late in the season, so the number of people was likely to be substantially lower than a couple of months prior.  However, we would also be arriving just before the commencement of a regatta, which meant a lot more people than there would otherwise be.  We considered holding out until afterwards.

Fortunately, it was not the Cruisers’ Regatta (made up entirely of visiting boats) but rather the Family Islands Regatta, comprised entirely of local sailors competing aboard traditional Bahamian sailboats.  We were intrigued and decided to consider the timing a unique opportunity rather than a misfortune.

George Town itself surrounds a small bay called Victoria Lake which is impossible to anchor in.  The only access is by dinghy under a small bridge sitting fifteen or so feet above the water through a narrow channel wide enough for only one boat to pass through at a time.

The most popular anchorages seemed to be on the opposite side of a large outer bay, which have beaches and events established almost exclusively for visiting boaters.  We opted to anchor nearer, which provided a shorter dinghy ride, eliminated the need for utilizing the $15 per person per way water taxis, and kept us clear of the boaters which sometimes appeared to herd together and minimize the requirement for local interactions.

As it turned out, there was plenty of room, even with the large number of boats in the bay, and we had little trouble finding a spot to drop anchor.

Finally, we had arrived at our long anticipated destination of George Town and could settle in for a while without worrying about constantly tracking weather and wind conditions, always having to plan where we were going to try to set anchor the following day.   Thankfully, as a bonus, George Town did not appear to be a destination for mega-yachts.