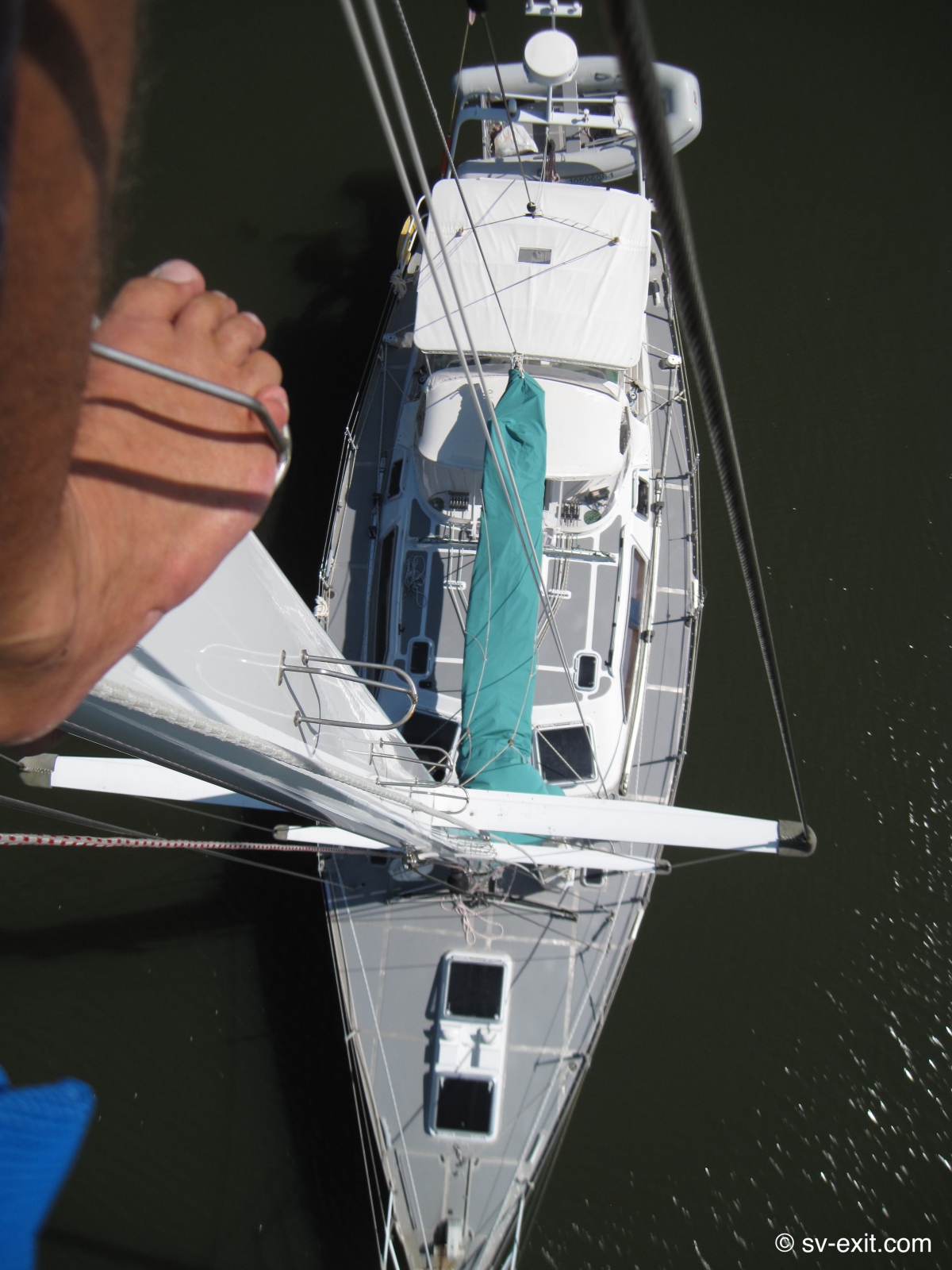 Our mainsail fiasco left us with only one option… time to break out the Bosun’s Chair and go up the mast.  On the surface, this seemed like a rather straightforward, if not adrenaline inciting, task.  Climb the rungs installed on the mast while being hoisted via a winch in what amounts to a sort of  “directors chair without a wooden frame” connected to a halyard which already runs to the top of the mast.  Hmmm… pretty straightforward until you’re 30 feet up in the air and realize you’re less than half way there!

Kris offered to go up but then, in a selfless moment of affection, offered me the honor while pointing out that “I needed a victory after yesterday.”  By about 45 feet up, I was no longer so certain of her generosity.

To add a further layer of safety/security to the climbing rungs and Bosun’s Chair being winched up on the Spinnaker halyard, I had an additional spare backup line around my chest which also ran up the mast.  Plus, I had attached to me a line to tie off the mainsail halyard if needed to assist in bringing it down.  We also decided that tying off the tools I was bringing up with me would be prudent – I definitely wasn’t keen on dropping a screwdriver through our salon window and Kris was even less keen on the prospect of potentially having to dodge out of the way of tools raining down from above!  Oh, and absolutely need to secure the camera… Hell, yes. I’ll be damned if I’m gonna go to top of this mast and not take some photos!

Kris started grinding on the winch and hoisted me a few feet into the air to get a feel for things.  After clearing the boom I reached the first rung and began the slow climb.  As I went up a step, Kris painstakingly cranked the winch keeping the Bosun’s Chair halyard tight.  Then after tying off the line, she went to the other side of the mast, brought up the slack and tied off the second line, then returned to the first line and the whole process repeated again.  The first ten feet was no problem… Kris did most of the work on that.

The physical aspect of the climbing was not nearly as intimidating as the mental aspect of the height compounded by being on such a seemingly unstable pole.  While I should have been comforted in the knowledge that the mainsail under wind exerts far higher forces on the mast than the weight of an adult, the additional fact that the mainsail had come crashing down yesterday didn’t go unnoticed by this sometimes slow-on-the-draw cowboy. 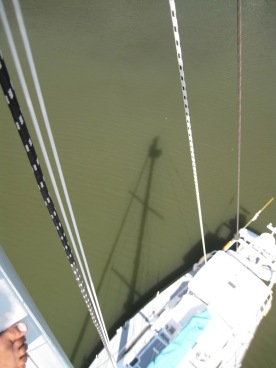 At 50 feet, I had gotten past both sets of spreaders, the deck and steaming lights, the steel shrouds and rope lines all without getting tangled, dropping anything, or falling.  However, any movement Exit made in the water became more and more exaggerated as I got farther and farther above the deck… especially any side to side rocking of the boat.  I’m sure there are mathematicians who could easily define and calculate the geometry, calculus, trigonometry or whatever math explained what was happening based upon simple angles and height; but the internal equation that was running in my head definitively calculated the movement as a shitload (converts the same in either metric or imperial).

This nearly prompted me to yell out to a couple of passing paddle-boarders, “Hey, this is a no wake zone!”

As I reached the top of the mast, 63 feet in the air, I opted for the more insightful and memorable statement of, “Holy shit… this is way high up!”

The mainsail halyard was just sitting at the top of the mast with a big ring at the end; a ring which thankfully had prevented the nightmare scenario of needing to re-run the entire halyard through the mast.  All it took was a pull (no additional line needed after all), and the main halyard smoothly descended to the deck.  Easy peasy!

We had also decided that, while I was up there, it made sense to try to straighten the wind indicator sensor, which appeared to have been knocked about 90 degrees out of whack (probably by some belligerent, rabble-rousing bird).  Basically, a wind vane with a paddle wheel oriented below it, it needed to sit at a certain angle to retrieve its’ data (wind speed and direction).  We had learned by experience that when the cockpit gauges give completely incorrect wind speed information and the close-hauled and overall wind angle gauges contradict not only each other, but also the actual wind in your face, then presumably your wind indicator sensor at the top of the mast was more than likely misaligned… sure as shit… this appeared to be the case!

It turned a bit more easily than I would have liked; but, after turning it in the opposite direct and getting no resistance, I chickened out and stopped – fearing that if it was just press-fit in place, I may only make it more loose.  So I rotated it 90 degrees and called it good, relaying my third inspiring quite to Kris which was, I believe, “O.K.. get me the fuck down!”

Looking down from atop the mast 63 feet in the air certainly makes the “A-List”, but I wouldn’t  relish the thought of doing it every week.  Making the All Time Memorable & Inspiring Quotes List was my final comment regarding the Bosun’s Chair… It’s going to take most of the afternoon to dig these boardies out of my butt crack!  In addition to added safety, this contraption is a first-rate wedgie giver!

In the end, it was two steps forward and one step back. The following morning, as I was brushing my teeth, I looked up through the ceiling hatch in the forward head and I’ll be God-damned if I didn’t see that stupid wind indicator sensor at the top of the mast laying over back on it’s side again… Arrrrgh!!!  Looks like another trip up the mast is in my future.