Block Island walks a tightrope, maintaining its small island identity with a permanent population of only one thousand people while hosting a remarkable ten to twenty thousand visitors every day (mostly day trippers arriving via high speed ferries).

Our first impression was not favorable, though it was based entirely upon a unanticipated introduction involving hundreds and hundreds of boats occupying the bay in which we were trying to find a spot to anchor – far too much sensory overload for two people who had just spent nearly a week alone on the ocean.

Ultimately, we came to a very different conclusion. 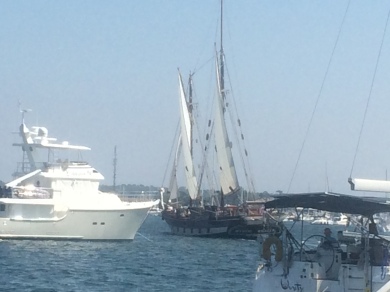 Mystic Whaler sails through the anchorage 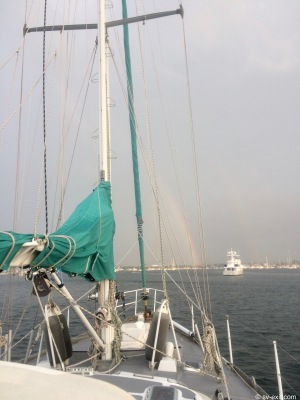 …just off the bow

As we were wandering around on our first day ashore, we stumbled across a music festival that was underway near the waterfront.  It was called Conservefest, and was dedicated to raising money and awareness regarding Block Island’s sincere efforts towards conservation.

We learned that the anchoring restrictions of some areas of the bay were aimed at preserving the sea grass beds imperative for local marine life.

The island also carefully monitors water quality in the bay, an especially important task considering the number of visiting boats.

One could make the argument that the extensive field of the mooring balls is largely a strategic source of revenue for the community.  However, it also helps to prevent potential damage caused by irresponsible or poorly executed anchoring practices.

Our arrival at Conservefest was perfectly timed to coincide with the performance of a band called Z Boys.  Though we had never heard of them before, they absolutely blew the other acts off the stage.  For nearly an hour, the guitarist, bass player, and drummer put on a stellar and smoking performance of original instrumental material.  It was reassuring to see that the power trio is still alive and kicking in rock music.

However, our primary focus initially was to get our depth gauge sorted out.  After troubleshooting multiple possibilities, we had concluded that it was almost certainly the transducer itself, mounted to the underside of the boat via a through hull, that had to be the problem.

As it seems is always the case, we had to wait through the weekend before being able to locate replacement parts.   After endless phone calls on Monday, we located a supplier who could ship us a new transducer immediately.  It shipped out on Tuesday and we received it on Friday.

After a quick switchover, there was an oh shit moment when the depth gauge still showed nothing but dashes.  But after further checking, we discovered it was merely an adjustment in the systems setup menu that needed to be configured for the new transducer.

Our depth gauge was back in business… and it read forty five feet… holy crap!

We also had the bonus of meeting one of James and Dena’s friends Benjamin, single-handing aboard his sailboat S/V Crackertale.  Not only was he a great character, but also an exceptional rigger.  We were able to get a clean bill of health after he thoroughly inspected Exit’s rigging, which included him scrambling up the built-in mast steps in fifteen knot winds without even the assistance of the Bosun’s chair or any safety lines… another holy crap moment.

We spent nearly two weeks at Block Island, and had the opportunity to wander around other parts of the island, including a great hike out to one of the lighthouses at the end of a sandy peninsula occupied by a family of relaxing seals. 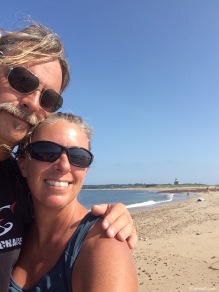 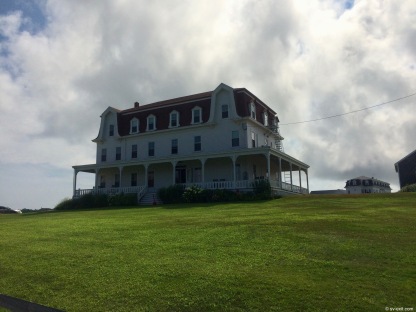 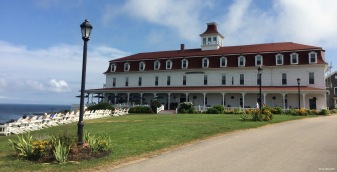 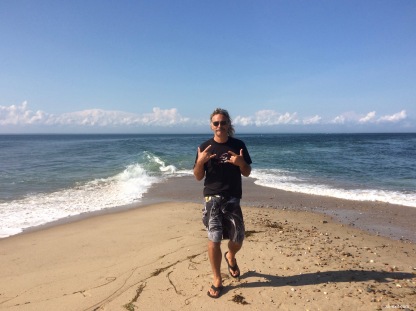