After departing Block Island on August 15, we headed for Cuttyhunk, our first destination in Massachusetts.  It was the one year anniversary since we had splashed Exit in Maryland, a day comprised of seven hours of sailing without any engine noise… nice.

We arrived already aware of the fact that nearly the entire inner bay of Cuttyhunk was occupied by mooring balls.  So we anchored just outside the breakwater, where we found very few boats and plenty of space.

For the first time this year, our Rocna didn’t grab the bottom on the first try.  A thick bed of long sea grass just below us prevented the anchor from digging in.  We found ourselves drifting backwards within close proximity to a mega-yacht. Though it was never that close a call, it was amusing to to see the very concerned expressions on the faces of two crew standing behind the window of the bridge… certainly a turning of the tables.

We moved to a completely different area and had no trouble on the second try… anchor beers well deserved.

Without the tourist traffic of Block Island, Cuttyhunk provided a quieter stop to explore.  Oysters on the half shell and clam chowder on the docks made for a proper New England experience.

We found the residents to be very boater friendly. 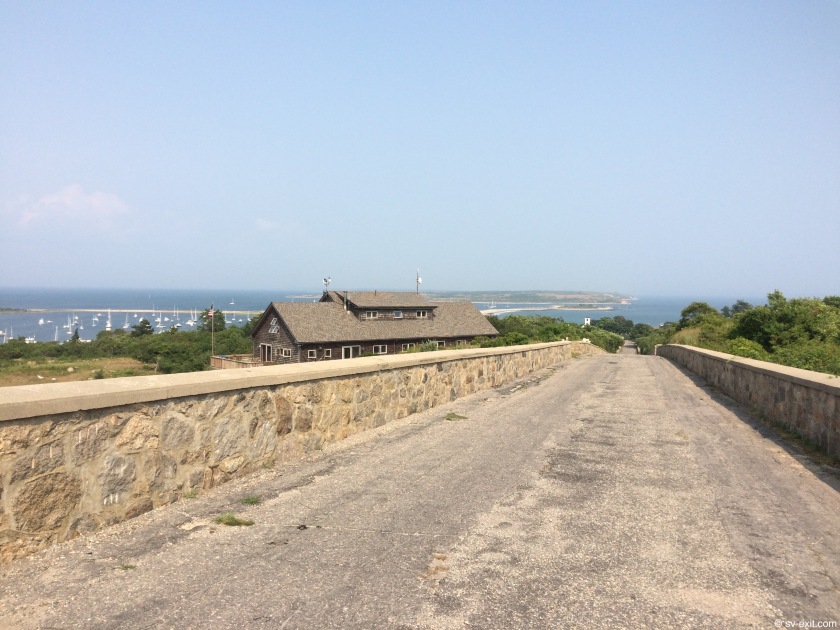 While wandering ashore, we happened across an unoccupied golf cart with a large crate of fresh corn.  Above the box was a sign indicating one dollar per ear… honor system payment into a box.  Though we subsequently found corn for less money at grocery stores in other locations, we thought it was money well spent at the time.

At Block Island we had seen tables set up outside some of the residences, where free fresh vegetables from private gardens were offered to those passing by, but our timing had always been poor and any vegetables were already long gone.

The day before we left Cuttyhunk, while we were heading back to Exit in our dinghy, we were approached by a man in a small power boat.  Initially, I thought he was trying to get around us so I slowed down and steered out of the way.

We were a bit confused when he slowed down, pulled up alongside us and asked if we needed any maple syrup.  We thought he was trying to sell it to us until he handed us a bottle, said it was homemade by his family, and told us it was a gift… awesome!

Again and again, we find these random acts of kindness (free syrup in Cuttyhunk, free rides offered in Charleston, our guardian angel Ray in Nassau) to be among some of the most rewarding exchanges we have while cruising.

It was at Cuttyhunk that we finally met up once again with our cruising friends and soulmates Dena and James (aboard S/V Nomad), who we hadn’t seen since they dropped us off at the dock in Carolina Beach after our road trip to NYC which was over eight months ago.

Now, we were in the same place at the same time again.  In fact, it was James who had suggested we jump the Gulf Stream from Georgia and head straight for Long Island.

At the time, it had seemed overly ambitious and beyond our capabilities.

In the end, we had taken the plunge and done just that… and were ecstatic that we had.  Now, they rolled into Cuttyhunk a day behind us.

James and Dena have been both an inspiration for us, as examples of two committed individuals living on a very limited budget who have proven for over twenty years that living aboard a sailboat was an attainable goal, as well as being a wellspring of knowledge regarding how to actually do it.

They were the first full-time liveaboard sailors we met after arriving at Back Creek just outside Annapolis right after we purchased Exit.  It also became immediately evident that they were of the very same mindset as us.

Being able to re-connect with them was energizing, to say the least.  We could once again enjoy each others’ company swapping stories, as well as get lots of advice.  They have always shown real interest and been exceptionally patient and helpful, especially considering how inexperienced we are.

They continually express how impressed they are with Exit’s construction, and have repeatedly assisted us in better understanding her.  In addition, they offer endless moral support and help us to gain confidence.  Having two people with their experience tell us that we display good judgement, decision making skills, and resourcefulness regarding sailing carries a great deal of weight and is quite reassuring.

After so many years living aboard a sailboat, they have an unfathomable number of stories.  We were thoroughly amused to be told that, for them, it is unique to know two people who have an equal number of interesting stories to tell as well.

Now, after nearly eight months, it was invigorating and exciting to have finally caught up with our likeminded liveaboard friends.

Fortunately, East Coast liquor stores were well stocked with Kraken rum, James and Dena’s drink of choice to which we have become converted connoisseurs of.

…just what one expects to find… 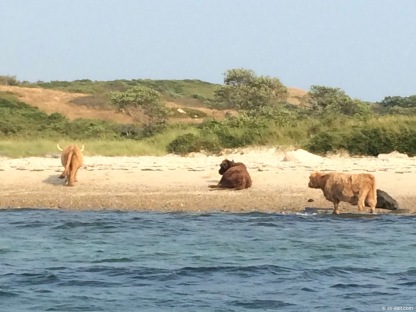