I’ll admit that I can certainly be a bit of an idealist (I can hear Kris laughing at that).  Generally, I try to steer away from ignorance (Kris still laughing).

I do realize the world is comprised of both haves and have nots.  And the haves are further distinguished between have some, have lots, and have ridiculously stupid amounts.

Not necessarily ideal.  Just the way it is.

However, there is a subsection of haves who apparently possess a need to display to everyone around them just how much some, lots, or ridiculously stupid amounts actually are.  It is this group of people that evoke a visceral reaction of absolute contempt and disgust from me.

We began to see an uncanny number of unbelievably high dollar yachts as soon as we arrived in Bimini.  I’m not sure of the specific dollar threshold at which a yacht becomes a mega-yacht, but it seems that the distinction becomes rather irrelevant when you get right down to it.

Regardless, there is a vulgar breed of these people emerging who take things to a whole new level of unrestrained consumption and arrogant displays of wealth… I dub them the Mega-Twats.

Oftentimes too big, or with too deep a draft, to fit into the anchorages that other boats are using, they tend to lurk just outside the general population.  They may have to anchor a mile or more out on the horizon, like a cruise ship.

They seem to almost be on display for all to take in… separated but definitely looking down from above.

And, make no mistake… they come with all-access passes.

Within moments of dropping anchor, their crew of at least a half dozen people is hard at work.  Jet skis are lowered by crane from the upper deck or retrieved from inside garage-sized storage units hidden into the stern.  Three-story tall water slides, climbing walls, and banana boats are diligently inflated and deployed.

Evidently, as some thrill seeking adrenaline junkie on a jet ski slaloms past the other boats at anchor in the area at wide open throttle, it doesn’t appear to even occur to him or her that… hey… I’m really, really being an asshole here!

Rather, it seems much more that their thought process goes along the lines of… Hey… Fuck you! I like to drive this thing really fast back and forth.  I don’t have a lot of time to waste, so I’m not gonna give a shit about showing any respect to other people!  I’m rich and that makes it all about me!

Any beaches are certainly fair game for a Mega-Twat invasion.  Not just an arrival… but an unmistakable and overbearing presence to be established.

Thirty foot long, triple-engine speedboats bring supplies ashore in advance.  Small pavilions, tables, chairs, and entertainment areas are assembled on the beach, establishing zones of occupation to be overrun at the whimsical discretion of some asshole calling on the crew to set up an improvised, quaint, and elegantly rustic beach picnic.

When we arrived at Shroud Cay, just inside the northern boundary of Exuma Cays Land and Sea Park, we were excited to take the dinghy inland to explore endless networks of creeks that snake back and forth through expanses of low-growing mangroves. 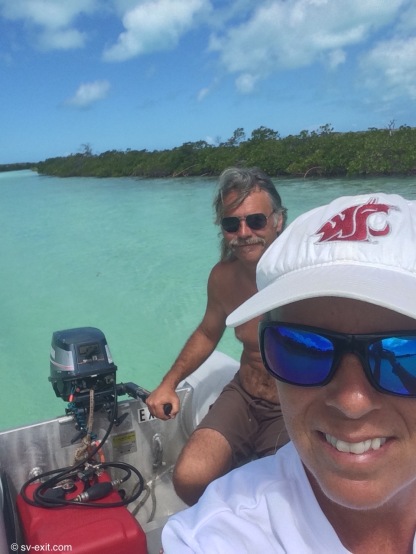 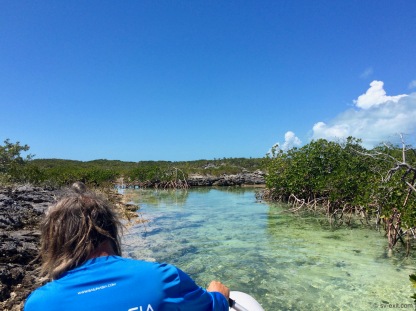 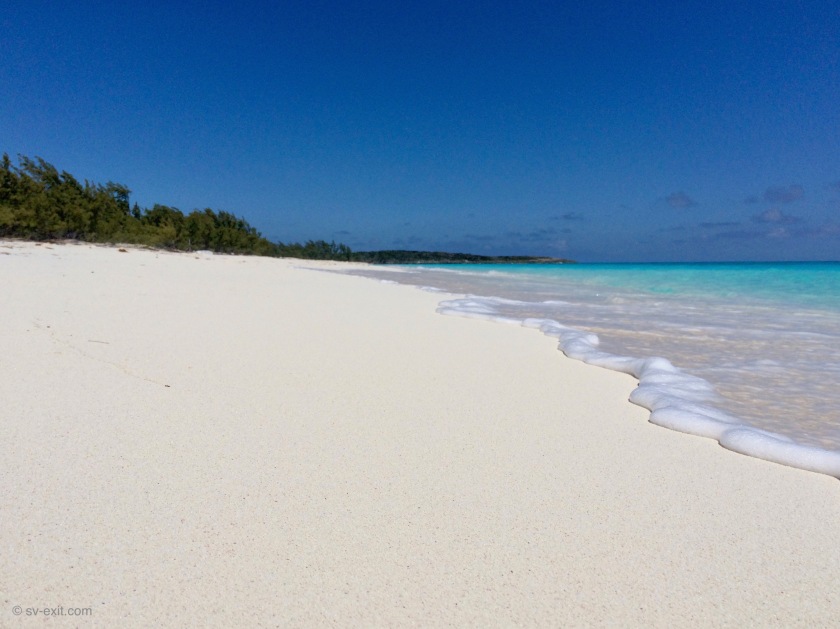 The park itself is twenty two miles long and extends four nautical miles beyond the cays.  This “No Take” zone, where hunting and fishing are strictly prohibited within its’ boundaries, provides a safe haven and replenishment area for native species as well as an opportunity to educate the public.

Shroud Cay is only about three miles long.  The anchorage on the west side faces out towards the shallow Exuma Banks side while the cay’s east side immediately plummets more than a thousand feet down into Exuma Sound.  Winding creeks meander back and forth through the mangroves that make up the cay.

Well clear of all the boats scattered about the anchorage, which can become a bit overbearing, many of the creeks feel remarkably isolated.

Obscure side canals and creeks provide endless routes to explore.  Some narrow to a point that eventually forced us to turn the dinghy around and backtrack.  Others opened into vast lakes and marshes of partially dried salt flats, more than a thousand feet across yet less than a foot deep… quite surreal… a bit primeval… way cool.

Fortunately, it is clearly posted at the mouth of each creek that all outboard engines are restricted to idle speed and jet skies are completely prohibited from entering the creeks, allowing for a much more intimate experience.

Much of the time, we shut off the outboard entirely, opting to row with the oars and thoroughly enjoy the lack of any engine noise or other people. 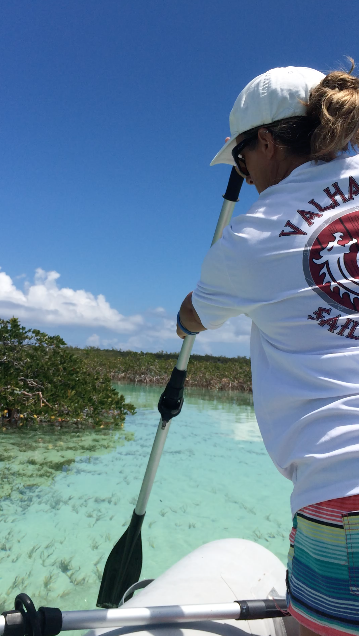 Baby sharks and young turtles swimming by in water that looked like it was inside a Bombay Sapphire Gin bottle were the additional reward for the extra effort of rowing, instead of motoring through. 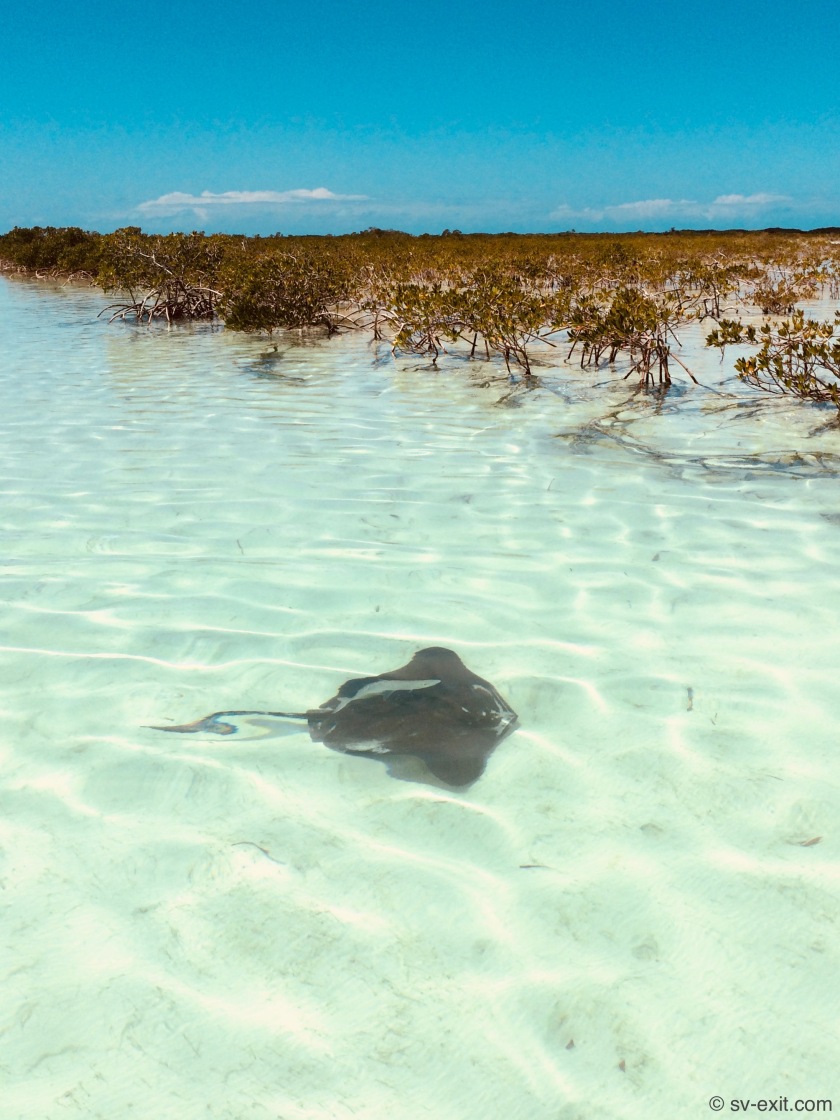 And then came the occupants of one of the Mega-Twats… We heard them well before we saw them.  Two jet skis.  Not more than a couple of bends in the creek away from us.

The incessant whine of their wide open throttles shattered the silence.  Their unmistakeable rooster tails of water tracked towards us.

We had meandered onto a side creek, which had subsequently bottlenecked down to a point narrower than our dinghy, and were now backtracked to where it opened back into the main creek when the jet skies came ripping around the bend.

Apparently, the assholes were going too fast for the sign at the mouth of the creek, which read All Vessels Idle Speed Only – No Jet Skis Allowed In Creek, to be seen as anything but a momentary blur at the outer fringes of their field of vision.

Luckily, we hadn’t re-entered the main creek yet, as the dinghy would probably have been cut right in half.

Instead, the guy on the first jet ski zoomed by us at full throttle, just off of our bow, and around another small tender boat that also happened to be right there in the creek.  His stupid girlfriend came wailing past on her jet ski ten seconds later. 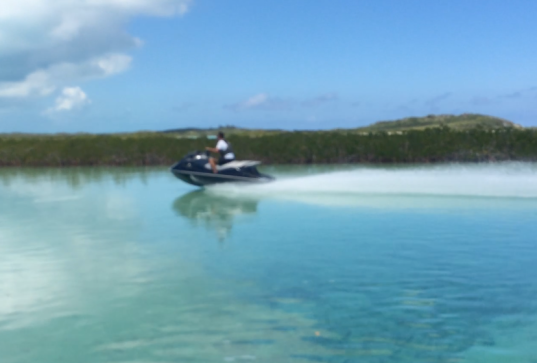 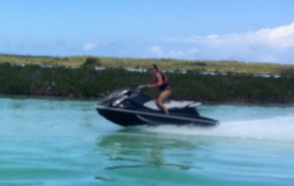 The guy in the tender informed us that these two jack-offs were from M/Y Skat .  We later identified a gun metal floating palace that seemed to stalk us as we cruised south down through the Exumas as the offending mega-yacht… M/Y Skat (ironically, a Danish word meaning treasure but an English word meaning bear shit —- ya, I know its spelled wrong but cut me some slack).

I was stunned to learn an ex-Microsoft engineer worth 2.6 billion dollars is the proud owner of this… seventy five million dollar (yes… $75 million is not a typo!) recreational vessel.  An RV complete with high performance jet skis and assholes to drive them… fucking Mega-Twats!