Part One in “THE PANAMA RUN” trilogy:

Much like Guanaja, Grand Cayman provided both a temporary stopping point and a chance to visit friends we hadn’t seen since July. 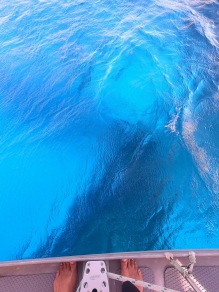 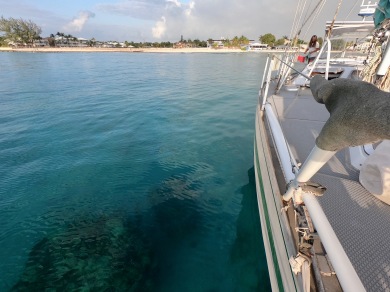 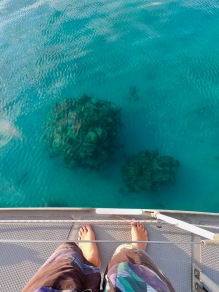 For the better part of three weeks, we worked on boat projects prepping for our next departure; topped up our provisions (another Mecca of just about anything you want if you can swallow Cayman prices); visited friends; learned that our oh so important laptop, even in the capable hands of a Mac repair person, was now able to do nothing more than billow smoke (RIP); and endured relentless bouts of wind – causing us to both move continuously as well as delay any long-range departure.

Budget traveler’s tip:  Try to time visits to expensive restaurants to coincide just prior with wedding party reservations, thereby maximizing your chances of being asked to move to the bar, when it turns out the table you have been occupying for three hours is now needed for the wedding party.  A managerial request of this magnitude should always be accompanied with an invitation for a round of drinks, on the house, of course.

Behold — the US$22.00 Gin & Tonic… mint with pink peppercorns… absolutely free of charge. 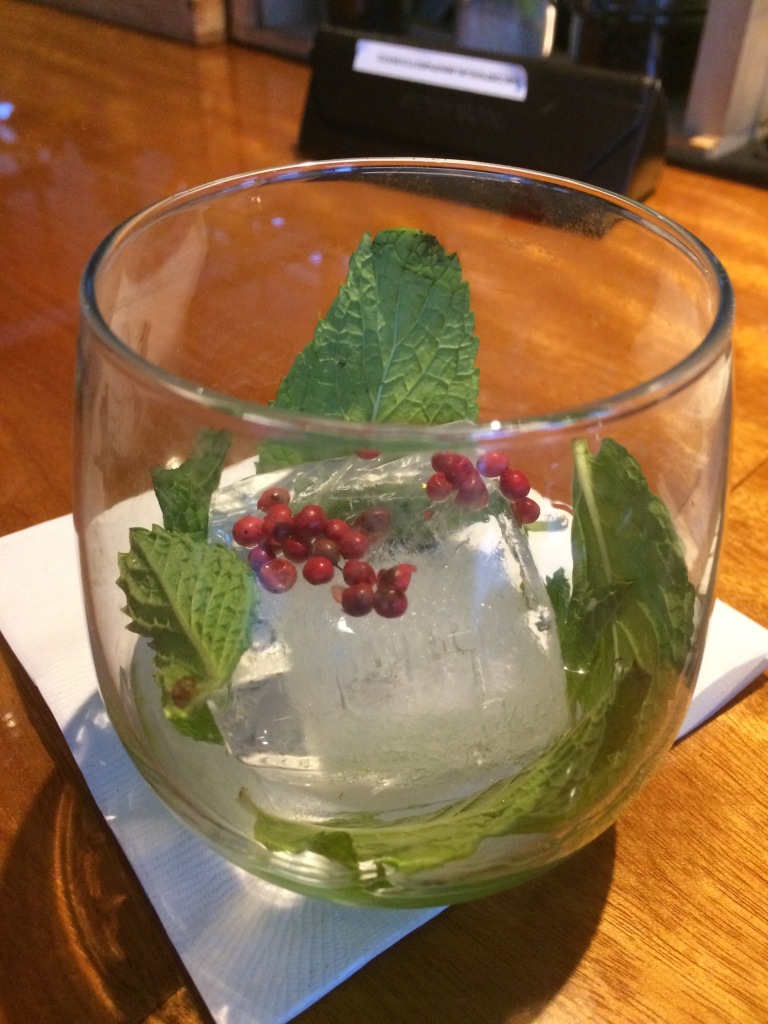 We were damned if we were going to get smashed on the high seas again or do another meandering wander through the Caribbean.

Even with our limited exposure to the daily overload of monotonous, relentless, repetitious, and manipulative information permeating the air waves, television screens, Internet sites, and media outlets, it was impossible to ignore the growing maelstrom surrounding the coronavirus.

For over a month, the topic of Covid-19 had evolved from brief passing mentions to dominating the attention, policies, and actions of an entire globe.  We first began hearing whispers —- the tracking of emerging cases, China limiting travel, a woman on a sailboat in the Rio Dulce who had researched the virus over fifty years ago.

Then the whispers melted into discussions… which began to permeate every conversation… which allowed a creeping fear and sense of real danger to spread even faster than the virus itself.

And suddenly, confirmed coronavirus cases and deaths were no longer isolated incidents.  They were showing up all over the planet.

…and then borders began to close.

Our own one month visa in the Cayman Islands was down to one week remaining (starting to sound familiar?).

Panama had not yet begun implementing any restrictions on travel or incoming sailboats.  It was where we needed to be to make an eventual crossing over to the Pacific.  Even if that didn’t happen this year, there were plenty of places (San Blas, Bocas del Toro) that would be easy to spend months and months exploring.  Panama granted six month immigration visas (and one year clearance for the vessel) which meant we wouldn’t have to keep moving from country to country.  And it was potentially a safe hideaway during hurricane season.  Furthermore, we knew we would be flying to SE Asia and the U.S. for a bit between September and November.  It seemed to make sense as a destination.

So ideas quickly evolved into plans.  We would catch the next reasonable opportune weather window and sail (hopefully more than motor sailing or, even worse, motoring) the six hundred or so nautical miles south to Panama.  We expected the passage to take about five days, with our course taking us over two hundred nautical miles off the coast of Nicaragua (far enough to, in theory, avoid the piracy issues which have begin cropping up in the area).  Hell, we would actually be closer to Jamaica than we would to the coast of Central America at that time.

And then the announcement was made that San Blas was going into lockdown.

The San Blas Islands, an archipelago of more than 340 islands on Panama’s Caribbean coast, also called Guna Yala by the indigenous and autonomous Guna Indians who effectively control this area of Panama, contain some of the most untouched stretches of virgin rainforest in the world.  The landscape has remained virtually unchanged in 500 years since the Spanish invaded.

It is said that the Guna Indians have best preserved their traditions and culture out of all of the tribes in the Americas (Panama Cruising Guide, 2015).  Land is effectively a resource to be used by the public rather than owned by individuals or possessed by industrial development.

Typically, though the Gunas prohibit any outsiders from permanently settling or inter-marrying and foreigners are not allowed to buy land or invest in Guna Yala, they are very accepting of visitors.

However, given their delicate situation in the modern world, it was completely understandable when the word came down that they were closing their borders to all outsiders.

…which concerned us greatly.

We had no idea whether or not there was any hope of getting an extension on our visa in the Cayman Islands, given the current volatility of policies, procedures, and protocols from country to country which seemed to be changing on a daily, or sometimes even hourly, basis.

There was talk of the Caymans shutting down cruise ship traffic and even air traffic in and out for weeks, so we held out little hope of being allowed to stay longer.

Furthermore, we worried that if we waited too long, we may not be able to get into Panama.

When our weather window appeared on the near horizon, it was a small one.  Good wind direction, wind speed, as well as sea state… a trifecta.  Far and few in between on those.

It would be a Friday departure… considered back luck by superstitious sailors.  But, what the fuck… women and bananas on your boat are considered bad luck as well.  Another trifecta.  Not only that, it would be Friday the 13th…

We’d either emerge on the other side with an uptick of confidence or we’d become a couple of exceptionally superstitious saps.

We were anchored in Governor’s Harbour, on the north side of the island.  It had proven to be the only place we could sit tight in just about any weather that was thrown our way, but still allowed access to civilization.  Clearing out of Grand Cayman was going to require a bit of a dance.

We needed to get diesel, which was available in Governor’s Harbour, plus we could get some supplies at the nearby Cost U Less (kind of like a Costco).  However, the Immigration and Customs offices were on the other side of the island, in West Bay where all the cruise ships arrived.

Once we cleared out, we had a maximum of twenty four hours to depart.

If we waited to get the diesel after we had completed the clearing out process, it would cost us $3.00 per gallon instead of $4.50.  Plus this was Cayman currency which meant we were paying about twenty five percent more than the US dollar… not an insignificant amount of money.  Over a hundred dollars difference.

We couldn’t pick up our spear guns (which had to be surrendered when we first cleared into Grand Cayman) until we were moments from leaving, as they were contraband items for us here.

It also turned out that duty-free liquor here was actually a HUGE savings, but was only available after we had our clearing out documents signed and stamped.  We’re talking 50% off, plus a number of them that had an additional “Buy 2 Get 1 Free” promotions.  Too good to pass up, especially for us!  The duty-free liquor store was conveniently located right next to the Immigration and Customs office.  However, any liquor purchased duty-free would be delivered to Customs where, it too, would only be released just before we departed.

We were informed that the spear guns could be delivered to Governor’s Harbour by Customs but they would not do the same for the liquor.  We’d have to come and pick that up.

Damn, this was getting complicated.

On the morning of Thursday the 12th, we took the cheaper option of a public bus to the Customs and Immigration office and completed the paperwork process of clearing out, after which we went straight to the liquor store and placed our order for a shit-ton of booze. Then we returned to Exit, transferred sixty gallons of diesel via our dinghy with jerry cans (no docking for us), and sailed the three hours back around to West Bay where we picked up a mooring and made a last run to the grocery store.

To our dismay, Crazy Guy was on a nearby mooring again (he had swam over to us from his tiny sailboat a couple of weeks earlier pushing a surf board with a waterproof Pelican case on it, claiming to be Jesus visiting his third universe where he was now tasked both with freeing all the rivers in the world of dams, as well as running for President of the United States this November once he found his twelve female Apostlettes and sailed to Florida…).  WTF?  At least he stayed on his boat this time… but I digress.

Eerily, there were no cruise ships looming near us.  Only an overwhelming stench remaining from a massive tire fire that had ignited at the rubbish dump upwind nearby, which had taken days to put out… but, again, I digress.

So, we’ve cleared out, sorted our duty-free liquor, gotten our diesel, purchased our supplies and provisions, returned to West Bay, and avoided another encounter with Crazy Guy… whew.

The following morning, we took the dinghy to the Port Authority dock, picked up our spear guns and eleven bottles (a great deal is a great deal!) of liquor, returned to Exit, released our line from the mooring, and departed Grand Cayman, setting out on what would become another epic journey.

An hour later, we were sliding smoothly through the water, under power of sails alone.  Running our mainsail, genoa, and staysail, we were averaging a respectable six to eight knots in fifteen knot winds just aft of a perfect beam reach. The four to six foot seas were lumpy; but the fact that we were not smashing straight into those conditions made it a night and day difference from the previous pounding we received struggling to get to Grand Cayman.

For nearly the next thirty hours, during which we celebrated surpassing the nine thousand nautical miles travelled marker (five thousand of those offshore), we sailed in as good sailing conditions as we’d seen in way too long of a time.   Not perfect… but a lot better than we been getting used to.