Traversing an emotional gauntlet which seemed to continuously pendulum between the giddy excitement of what lay ahead, the intimidation and fear of the future unknown, the pure joy of simply being with friends, and the brutal heartbreak of what we were about to leave behind, we navigated our last twelve days in Borneo.

Tino’s wedding, destined to be epic because it was Tino’s wedding, provided the perfect opportunity to see friends, past colleagues, and acquaintances one last time in a purely enjoyable setting – no logistics and crises to wade through (not that WE had to wade through anyway)…only old school Scuba Junkie good times.  It even provided one more opportunity to jam with the old Scuba Junkie Band (a group of incredibly talented musicians who graciously allowed me to play rock star with them on numerous occasions)!  People we never would have been able to chase down now showed up on Mabul for the wedding, giving us a final chance to say hello again and goodbye to a long list of individuals who had touched our lives.

We also had the incredible experience one day of diving Turtle Tomb at Sipadan.  As one of the premier dive locations in the world, Sipadan (just thirty minutes by boat from Mabul) offers some of the best dives people could ever experience in their lives.  Turtle Tomb is a number of connected underwater chambers under the island that occasionally would claim the lives of marine creatures (dozens of turtles, dolphins and even a swordfish) that ventured inside and could not find their way back out again.  The bottom of the chambers are littered with intact skeletons – macabre but fascinating.

We had dived Sipadan hundreds of times before but this was quite a different experience.  Dive centers don’t take tourists into the caves because of the obvious dangers of an overhead environment which had already claimed the lives of even very experienced divers in the past.  The only reason we were comfortable doing this dive was because we were guided by our dear friend Eljir (the manager of the dive resort next door to Scuba Junkie’s Mabul Beach Resort) who had been diving Sipadan for over twenty years and had navigated Turtle Tomb hundreds of times.  No… it wasn’t by the books.  No… certified cave divers would (and probably should) condemn us for trying to be another casualty statistic.  No… there are many overhead environments we would not think of penetrating.  Yes… we had a fucking amazing dive!!!!!!!!

The day of our departure from Mabul on March 1st was the crushing heartbreak that we knew from our previous departure in 2010 would be emotionally brutal and inevitable.  However, we also learned from that previous experience that, while nothing lasts forever, things have an uncanny way of coming back around full circle again.  So with heavy hearts and tear filled eyes we said not “goodbye” but, rather, “until next time”.  And with nearly 100 people on the jetty, we climbed aboard the transfer boat and waved farewell to our Scuba Junkie home and family.

An additional few days in Kota Kinabalu and then a trip to Bali and Komodo, Indonesia for a week gave us the chance for a few more special visits to Scuba Junkie family who had become especially close to us over the years.

A moment with Mel 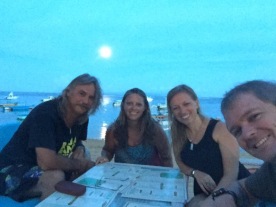 What do tigers dream of…? 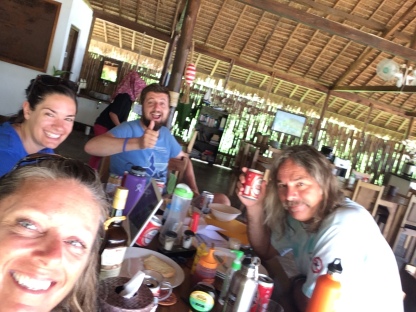 “Bellying up” to the beach bar in KK

Looking back, Scuba Junkie ultimately provided us with our first open door into the dive industry.  We learned an unbelievable amount, not only about diving, instructing and guiding, but also about being self-sufficient, about problem solving, about logistical organization, about an appreciation for what you have, as well as sorting out what you really need and getting by with what you don’t have… all from the context of a very remote location.  The environmental work we had the privilege of being a part of was legendary in its scope, ambition, vision and impact.  We will always consider our time with Scuba Junkie as one of the turnaround live-altering periods and most memorable and enjoyable experiences we have ever been a part of.

To Ric and Tino, the owners of Scuba Junkie who ultimately chose to overlook our age difference and provide the opportunity for us to prove ourselves… we can never thank you enough.  Your decision set us on a trajectory that changed our lives forever.

To the Junkies we had the pleasure of meeting, working and partying with (not limited to but particularly worth mentioning): Rohan and Carys, Ewan and Lydia, Adz and Rusdie, Rory and Kay, Matt and Dani, Mel, Amanda, Luke, Simon, Paul, Mike, Ali, Dave & Cat, Ash & Dave… to the local resort staff, to the local dive masters and instructors, to the boat captains, to the guests we connected with, and everyone that touched our lives – we’ll never forget you.

To the Scuba Junkie Band:  I (Steve) can never express the magic I felt every performance I was privileged enough to sit in on.  You guys rock with the best of them!

By mentioning names, I know I am omitting others.  This is a failure of my immediate memory rather than a reflection on all of the incredible people who had such a profound influence on our lives.