We departed P-Town, MA with the plan to detour slightly out of the way of our intended one hundred fifteen mile plotted course to Seguin Island, ME to pass over Stellwagen Bank.  Just north of Cape Cod Bay and east of Boston, this twenty mile long plateau, surrounded by depths of two to three hundred feet, rises to within less than a hundred feet of the surface.

Apparently, it a a prime location to see whales during this time of year, as evidenced by the fleet of whale watching boats that depart P-Town every day, brimming with tourists who have paid $60 each to be taken to Stellwagen Bank for that very purpose.

What better situation than to have your own boat to do just such a thing?

We chalked up $120 to our “credit fund” (we have a running semi-joke that every time we do something aboard Exit ourselves rather than paying someone else to do it for us, that money goes into a theoretical “credit fund” which we feel much less guilty about spending later), and headed for P-Town via the Stellwagen Bank, on what we hoped would be a whale sail.

Of course, one very important lesson we have learned over years of diving is that absolutely the best way to maximize your chances of NOT seeing something is to go out with the intention of seeing it.

Consequently, we saw not a single whale that day.

However, any disappointment was diluted over the course of the twenty four hour passage, during which we spent over twenty of those hours under sail power alone… most relaxing and rewarding.

As we came within about ten miles of reaching Seguin island, I spotted a shark at the surface that seemed to be feeding on something.

When we turned Exit around under sail, it immediately seemed like an impromptu man overboard exercise, only we were trying to get back to what we thought was already a carcass.

After a couple of tacks and gybes it became very clearly evident that, unless we intended to make this a rather drawn out exercise, we had best fire up the Perkins and douse the genoa.

Moments later, as the relative silence of our environment was replaced by the rumbling of the diesel engine, supplemented with the intermittent splashes of raw cooling water sputtering from the engine’s exhaust port, we approached what we thought were the remains of something.

The shark was no where to be seen…

…it was not dead.

But, then again, it had never been alive… because it was only a faded red boat fender… cue: game show “you just lost” sound effect here.

It looked like a huge, floating hunk of meat.  Even the shark had taken a bite.  In actuality, it was just floating garbage lost or abandoned by another boater.

On behalf of a species that had polluted far too much of the ocean, we now felt obligated to at least retrieve it from the water.

Though it was someone else’s litter, it would now become our garbage to deal with.  A small attempt at reconciliation with the planet.  We need to get a swimming pool cleaning net to help us snatch up rubbish that we see afloat.

At last, after numerous attempts, we managed to snag the fender with a boat hook and get it out of the water, where we unceremoniously threw it in the dinghy to await eventual disposal into a dumpster where it becomes someone else’s problem.

A less noble adventure that occupied the remainder of our time as we approached Seguin Island was a battle we found ourselves waging against the dark forces of biting black flies that had suddenly invaded our vessel.  Possibly residents of the local lobster boats, temporarily stationed as sentinels on the lobster pot floats that surrounded us, dozens and dozens now flew about inside the cockpit, endlessly annoying, attacking, and biting us.

Armed with our trusty fly swatter Fly-calibur, the cockpit became a killing field.  By the time we reached Seguin Island, dozens of fly corpses, smashed and broken, littered the floor of the cockpit underneath the teak grate.

All the while, we were also having to constantly change course, dodging left and right to avoid the infinite number of lobster pot floats scattered in every direction.  Oftentimes they couldn’t be seen until we were nearly on top of them.

In the cockpit, it sounded something like, “Lobster pot to the left… ouch!  Fucking fly…. Oh shit… back to the right now… ouch!  Where’s Fly-calabur?  Do you see that pot just ahead?  Ouch!  Ha… got you fucker…”

However, while managing to successfully navigate without running over a single lobster pot, ultimately, we were unable to fully repel the invading flies.  We subsequently  found ourselves involved in repeated skirmishes that occasionally broke out aboard.

Still, we had finally made it to Maine! 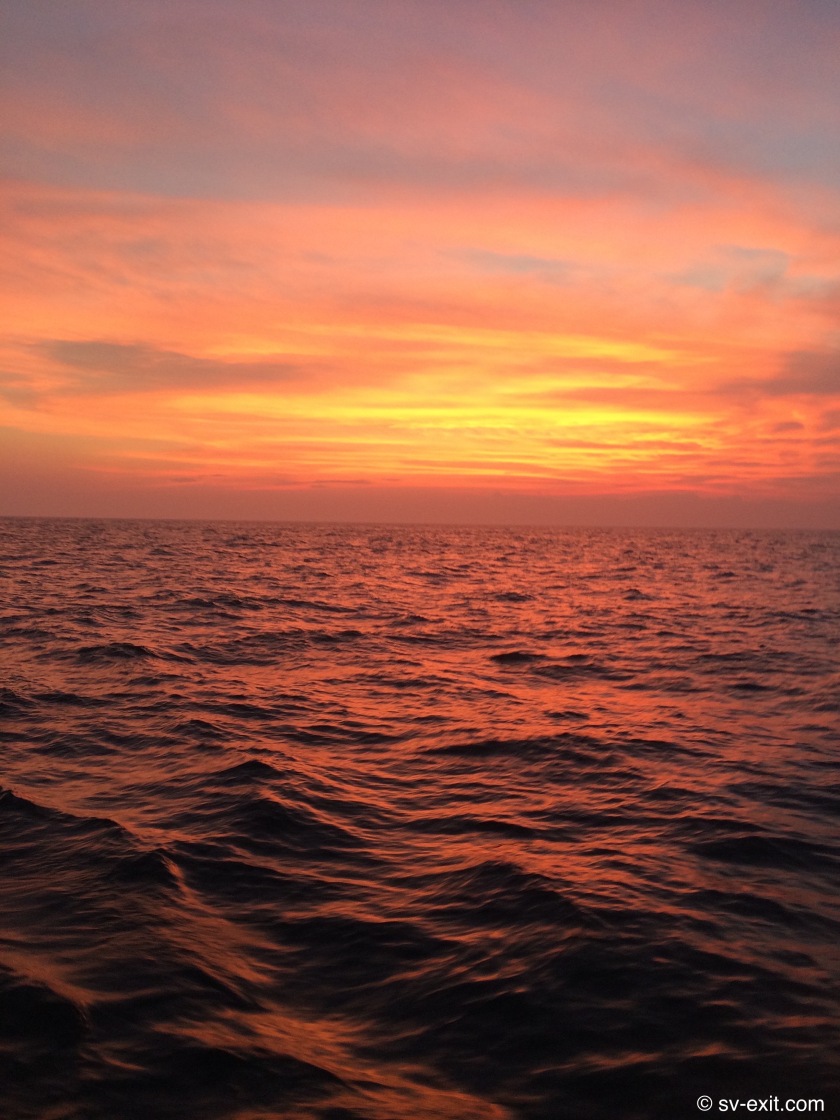