Why would six gringos, four adults and two four year olds, one with a broken arm in a cast no less, be wandering around unaccompanied in the Panama jungle?  On the surface, as well as both above and below the surface, this seemed like far more than a rather reasonable question.

The plan was a leisurely jaunt over the mainland from a dock just across the cove from Isla Joya (the same dock leading to Wild Bill’s infamous and now abandoned Jolly Roger Social Club) over to Green Acres chocolate farm.  It was only about one mile directly across from our cove to Dolphin Bay and not more than twice that diagonally to Green Acres… what had been described to Sharon by a local as “a twenty minute walk on a path.”

Ninety minutes into the jaunt, Sharon decreed, “I have no idea where we are.”

I realized there had been much more confidence in her voice earlier, back at the dock when Bev had made a passing reference to a guide.  I thought the answer at the time had been, “I know exactly where we’re going.  We’re just following a path…”

After two hours, we had not seen a single person since being dropped off at the dock.

We had three phones with occasional momentary reception, but only enough to get a GPS update on our current location on Google Maps —- invariably it was not far from where the last point had been.  Or to send a text —- Bev, we might be lost.

Sharon handed me the machete.

What had started off as a very discernible path leading from the dock into the dense jungle seemed to keep branching and branching.  The general strategy had been to keep angling in the correct direction but also try to keep to the more established, current, and traffic-worn trail.  Some trails eventually dwindled away to nothing, forcing us to backtrack.  Others split off continuously.

Essen, the fourth adult in our party, reminded me of a rubber band as she stretched back and forth, shooting between her two four year old twins, who were themselves ricocheting in every direction through the jungle.  Dylan and Melody, who was currently sporting a bright green cast on her broken right arm from a climbing mishap five weeks earlier, were still remarkably upbeat considering the terrain we were trudging through.

On an interesting side note, I did learn that, in Turkish, the word “stop” apparently means “just continue right on doing what you were doing”… hmmmm.

The distinction between a looking at a Google map satellite photo with a straight red line from point to point and actually physically walking between those two points with your own two feet never became more apparent.

By the time Sharon’s foresight to bring a machete was realized, it became all too obvious that we were ill prepared in almost every other way —- a hand held radio would have made sense… a reasonable supply of drinking water certainly wouldn’t have been ridiculed… I did have on a pair of running shoes but knee high boots now seemed like a smarter choice; by this point Kris had reverted to full scale primitive, opting to carry her Crocs and go barefoot… it was undoubtably a questionable environment for two four year olds with compliance issues, especially when one had an arm cast that needed to stay clean and dry…

Ultimately, a guide was the one thing we sorely lacked.  It would have made everything else irrelevant because we would have only been on a twenty minute walk on a path!

Finally, I began to get a feel for clearing a path with the machete.

Only thirty minutes ago, I had taken point.  As I recalled watching many movies featuring jungle-hacking trailblazers deftly cutting a swath back and forth through hostile vines and plants, I confidently swung the machete in front of me for the first time.

Nothing had prepared me for the violent shudder I felt through my right arm and dull clang I heard as the machete bounced harmlessly bounced off a tiny vine no more than an eighth of an inch wide.

I looked at the vine.  It was tiny.  It did not appear to be made out of some alien alloy.

I looked at the machete.  It was metal.  It appeared to be newly sharpened.

I looked at Sharon.  She was trying to suppress a laugh.  “You have to cut diagonally.”

The second swing went through a one inch thick plant stem like butter.   I smiled.  This could be fun.

Three hours into the adventure, we had lost the path entirely.  After a painstakingly slow descent down a slope far too dense and steep to be carrying a sharp object, we reached somewhat level ground.  I had spent most of the time envisioning a sudden slip, only to see a machete sticking out of my belly upon standing.  Fortunately, that did not happen.

Subsequently, we had decided to follow a small creek that —- in movies, at least —- always leads to a village.  However, an enormous fallen tree now blocked our path, forcing us to divert back into the thick and relentless jungle.

We were getting no where, very slowly.

By this time, multiple texts had been sent to and received from Green Acres.  Thankfully, their local employee Ocias (ironically pronounced Oh-see-us), whom we first met back in June, had already been deployed from the chocolate farm to retrieve us.

We kept pressing forward as best we could, but any semblance or sign of human life had been absent for quite some time.  The direction we kept trying to go constantly seemed to be the densest wall of follage and growth.

Fortunately, any potentially dangerous critters, and I’m sure there were many that we never saw —- fer-de-lance and bushmaster snakes (both can be aggressive and fatal), scorpions, spiders —- all seemed to be more determined to get the hell out of the way of the thundering herd of pale outsiders than to defend their home.

Even the mosquitos appeared to have sympathy for the dumb gringos, leaving us unmolested.

Had the skies unleashed rain upon us, it would have been absolutely miserable.  All things considered, everyone was still in good spirits and this still qualified as an adventure.

Eventually more than one person began to intermittently ask if anyone else had heard someone’s voice calling out.

It took a couple of stops with everybody standing still, listening, before we all agreed someone was yelling for us nearby.

Our salvation!  We would not become food for the jungle today.

Ocias emerged from the jungle slightly to one side of us with a big grin on his face.  He was wearing rubber boots and carrying a radio… smart guy.  As we converged, everyone let out a big cheer.

Immediately, I noticed we were already on a path.  Where the fuck had that come from?

During the long trudge that remained to Green Acres, Ocias kept taking photos with his phone… photos of things he saw along the way… photos of the ridiculous gringos he had pulled out of the jungle.

For the most part, he seemed rather amused by it all.  And, though some particulars may have been lost in translation, at one point Ocias appeared to express concern for our being in the jungle alone, especially had night set in.  Something about… the jungle is not for people at night… and something else about… jaguars y tigres.

Unbelievably, it seemed we purposefully strode for another thirty minutes —- up hills, through pastures, across mud bogs —- still always on a path, before finally reaching Green Acres… this time with someone who knew where they were going.  In the end, it appeared that after three and a half hours of walking, we had actually ended up ten minutes farther away from Green Acres than we were when we started walking.  Our first wrong turn must have occurred at the first branch in the  trail…

Eventually we arrived at Green Acres. Four hours had passed since Bev dropped us off at the dock.

At the chocolate farm, we were surprised to learn from Carlos and Gary that Ocias had initially been unable to find us. After searching unsuccessfully he had returned to Green Acres empty handed and spoken to an older Panamanian guy who was on the property cutting wood. It turned out the guy was an ex-police officer who told Ocias that while on the force they had been trained to use a tried and true, surefire method for search and rescue.

Lick your finger and hold it up in front of you. The side of your finger that dries will face the direction in which you will locate the people you are searching for.

I asked for clarification. Had I heard that correctly?

Yes. Apparently, I had. That was how Ocias had located us.

Now, I had heard a similar method to determine the direction wind was coming from… but… for locating lost people? Really?

My jaw began to drop. But before the words are you kidding… or that’s ridiculous… ever got a chance to tumble out of my mouth, something occurred to me.

What the fuck did I know? I was one of the idiots who was lost! He found us.

“Ahhhh… yes,” I said instead. “Thank goodness for the old Spit Finger Search and Rescue Method.

After our visit at Green Acres, suffice to say there was no drama on the way back to Isla Joya…

…we got a ride home by boat. 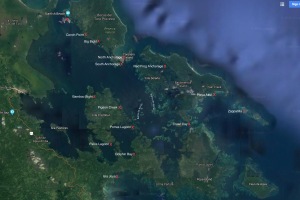