Diving from the Mothership

After a successful return to the States we only had to enjoy our remaining time in the Cayman Islands, lock in our next destination, and clear out.

Our final thoughts regarding the Caymans…?

Cayman Brac and Little Cayman, though more developed than the uninhabited islands and cays of the Bahamas, were still unbelievably remote locations.  And they represented the healthiest underwater environment we had come across since leaving SE Asia.

While not that “fishy”, it far out-populated the Bahamas and Jamaica.  The coral was diverse and healthy, and the topography was amazing.

The Caymans’ approach to conservation (regarding use of moorings instead of anchoring, as well as their strict hunting restrictions, and even implementation of recycling and accessible rubbish bins) was a fresh mindset, and something that was obviously having a profound positive effect on the area.

Grand Cayman, really was more of an accessible hub to civilisation for us than anything else.

Our only experience anchoring put us in a completely out of the way location in North Bay for a week  just off of Starfish Point, where except for one night, we were the only occupied boat in the bay after dark.

The dinghy trips to Stingray City were better than we would have imagined (see previous post Stingray City).  We had so much fun the first time, we opted for a second trip there. 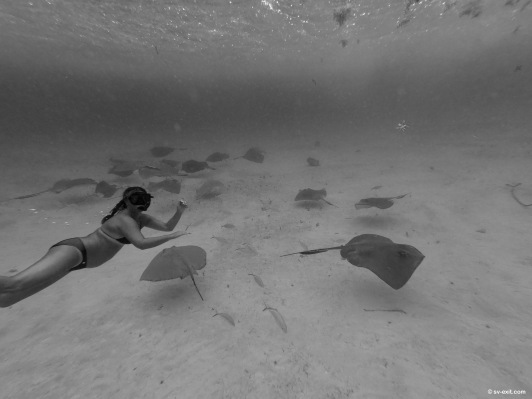 It also provided the experience of a squall with 35-40 knot winds.  At 10:00pm, with zero visibility due to the pelting sheets of rain, we found ourselves dragging anchor.  Knowing that we could drag five miles before we would reach anything (the other side of the bay), we found ourselves in the surreal situation of watching our boat lay a track on the chart plotter while we were sitting below, unable to see the shore, as Exit dragged more than a quarter of a mile before finally having the anchor reset itself.

Strange?  Absolutely.  But also somewhat comforting to know we had nothing but open space ten feet deep behind us for miles.  Thank goodness for isolation!

Our return to the mooring balls in West Bay was more about access than safety.  We were immediately reminded that being in the midst of endless traffic and cruise ship activities was not our forte. 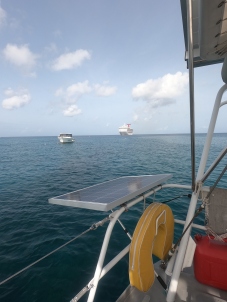 However, we had the pleasure of meeting a gentleman from the George Town Fire Department who kindly went out of his was to help us secure a lifetime supply of old fire hose which was invaluable to us as chafe protection for our lines.

We were also dumbfounded that, by the end of our stay on Grand Cayman, we had not only managed reunions with two of our old Scuba Junkie family members Nic and Martino (whom we had not seen in over eight years), but also stumbled across one other ex-Scuba Junkie staff (Christian) and another guy (Ben) who worked on Mabul while we were there.

And, of course, the diving…

Not only awesome dives, but also the accomplishment of finally diving directly from the Mothership.  Due to technical difficulties, we could only post a low resolution video of the experience, but what the hell… still gets us stoked watching it.

To our friends Nic and Martino, it was incredible to see you again.  Thanks especially to Nic for looking after Exit while we were back in the States.  Not goodbye, but rather, until next time…

To our friends Davey and Erica, aboard Barefoot Two (the only other live aboard sailors in Grand Cayman upon our departure), thanks for your company and your assistance multiple times.  We wish you the best during your employment with Cayman Divers.  Not goodbye, but rather, until next time…

The Bay Islands, Honduras after sailing over the 15,000+ foot deep Cayman Trench and, hopefully, a brief stop at the tiny speck of land called Swan Island. 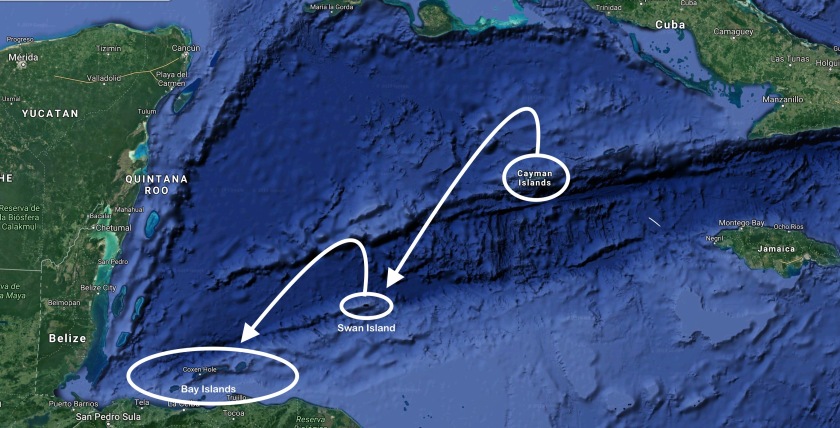