Sitting at the Cay Cafe on another ‘Thirsty Thursday’ with our friends Annette and Don after doing some shopping at Bonacca having some drinks and chatting.  Annette had just bought a ticket to fly to La Ceiba on Sunday morning to do some shopping.  She had wanted Don to go with her and go up the Rio Cangrejal to do some rafting but he wasn’t interested.  Of course I, Kris, said, “I’ll go!”.  After being on the island for over a month I was kind of jonesing to check out the mainland.  However there was the big problem of not wanting, and not being fair, to leave Steve alone on the boat (which we had never done before) while I go off shopping and galavanting on the mainland.  So we left it and continued drinking.

So I quickly sent Annette a message telling her what Steve said and asking if I could tag along.   She replied with the affirmative and that she would pick me up to go to the Cay (Bonacca) tomorrow to change her flight and see if there was space for me.  Which is what we did!  We were flying out on Sunday morning and flying back Thursday afternoon.  This would give Annette time to do all the shopping that she needed to do in La Ceiba and then we booked two nights at Omega Tours that was up on the Rio Cangrejal.  Woohoo I’m going to the mainland!!

Sunday morning Don and Annette picked us up and took us to the little Guanaja airport (which can only be accessed via boat).  It was great flying over Guanaja and Roatan and seeing the Cayos Cochinos. 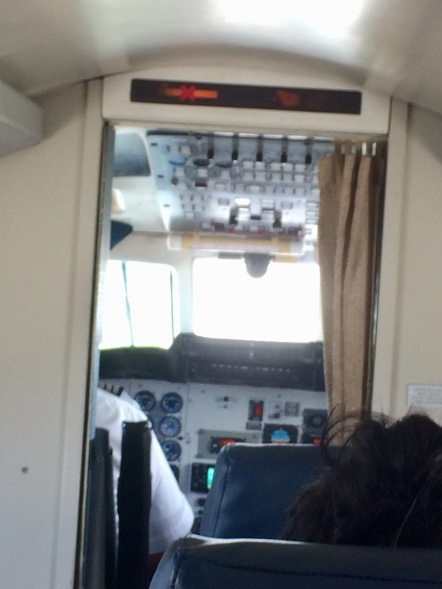 We landed without incident and were picked up by Annette’s friend James who is from Colorado but has lived in Honduras, and has been married to a Honduran, for ten plus years.   He is a super nice guy and drove us out to Sambo Creek, a Garifuna village, for lunch and then dropped us off at our hotel in La Ceiba.

The next morning Annette’s friend and taxi driver, Eliberto, picked us up at the hotel for a day of shopping.  And what a great day we had!  Eliberto went to every store with us which was fantastic as he speaks very good English so if we needed a translator he was there.  The amazing thing is that it was all so easy!  So many shops will box up your purchases and take them to the shipyard and put them on the boat going to Guanaja.  And ones that don’t provide that service, Eliberto takes care of the boxing and delivery to boat.  Then it just has to be picked up when the boat reaches Guanaja.  No worrying about how much you can take back on the plane with you!  And Annette was awesome and let me put some things that I found in her boxes.  Thanks Annette!

Annette was able to get all of her shopping finished in one day so we were ready to head up the Rio Cangrejal as soon as we could!  James had no plans, and liked getting out of the city and visiting the Omega resort, so he agreed to pick us up and drive us.   What a day!  After we had breakfast we had a few hours until James picked us up so we walked around the area of the hotel which was fun. 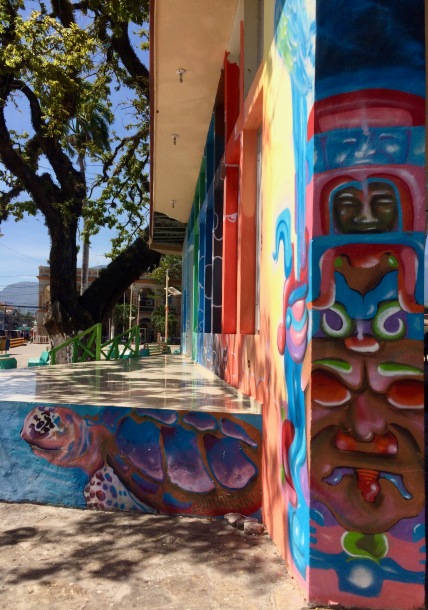 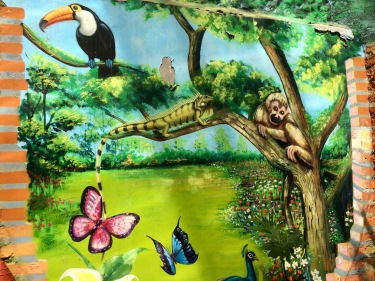 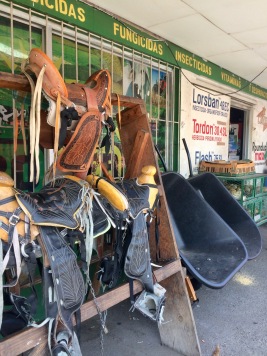 The drive only took about 20 minutes outside of the city but what a different world!  Beautiful, and the boulders in the river are hard to describe just how huge they are, as big as houses.  We stopped at places on the way to Omega and, since it was early, James offered to keep going up the mountain to the last village on the road, stopping along the way.  Suspension bridges, views of the river, and the most amazing ‘cable car’ ride across the river gorge to a women’s co-op that sells various sewing items.  I just couldn’t stop saying ‘amazing’ the whole day!!! 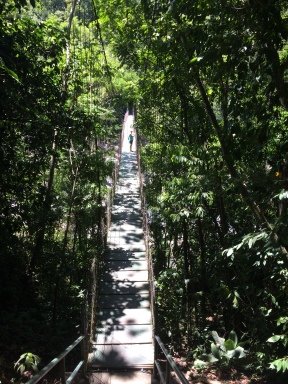 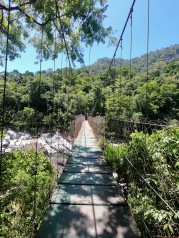 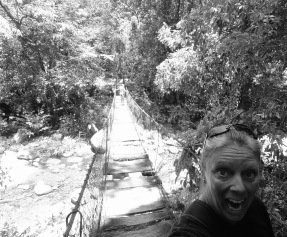 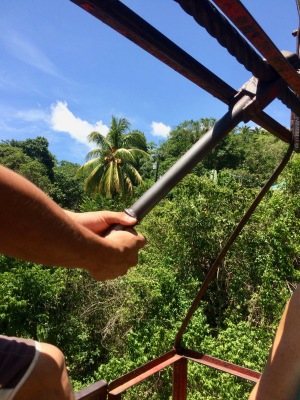 Once we got to the end of the road we had a beer (of course) and walked around the village a bit. 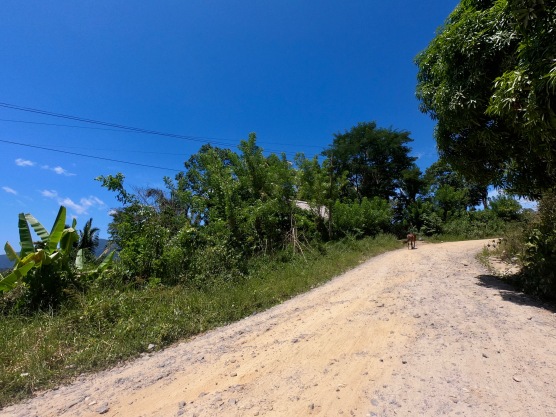 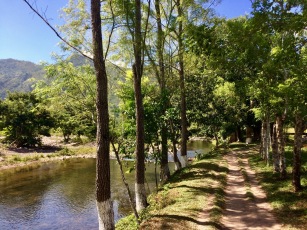 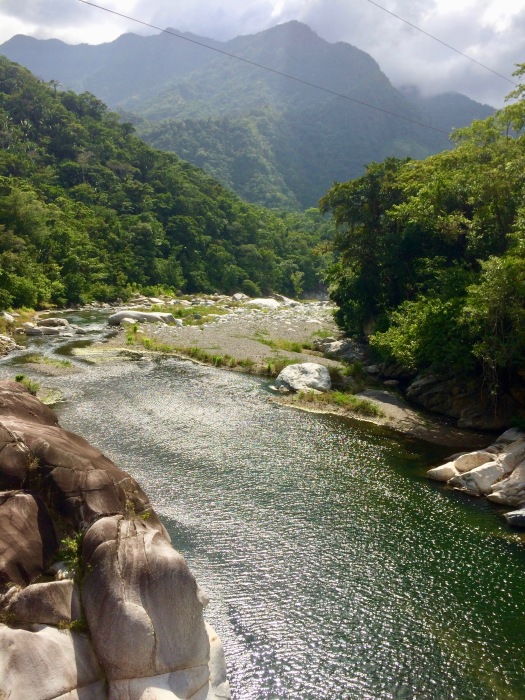 Leaving there we retraced our trail to Omega to check in.  What a beautiful place!!!!  The pictures don’t do it justice at all.  The owners have designed and built everything themselves.  The woodwork and even the steps in our bungalow was spectacular!  They even designed their fresh water pool to fill with water diverted from the stream to flow through the pool and end up back to the stream.  Unfortunately it was very dry this time of year so I didn’t get to see the water flowing but we did take a dip in the refreshing pool.

We had a fantastic late lunch with James and he headed back to La Ceiba before dark settled in.  What a wonderful day! We settled into the bungalow, Annette showed me around the resort and we had a really nice dinner and crashed for the night.  Time for rafting tomorrow! 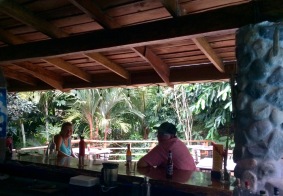 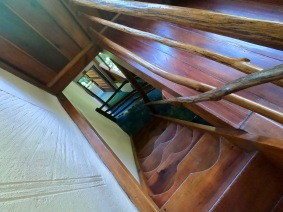 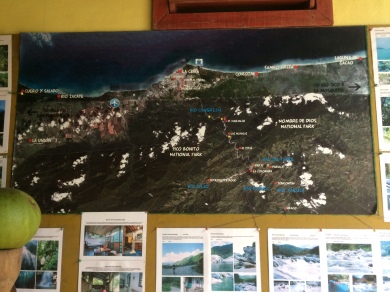 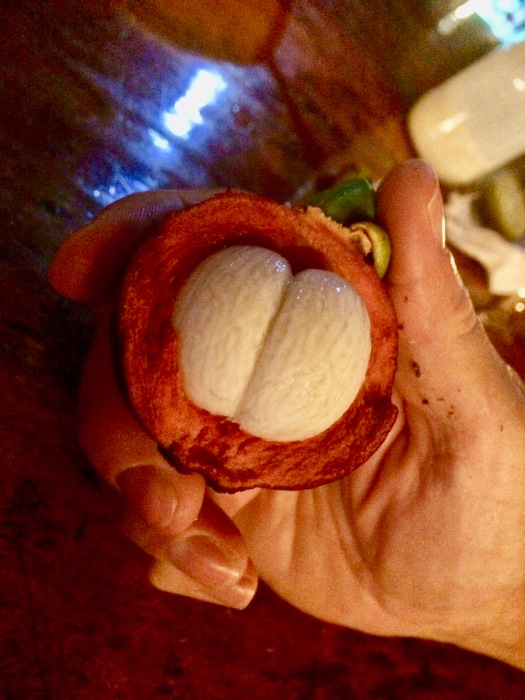 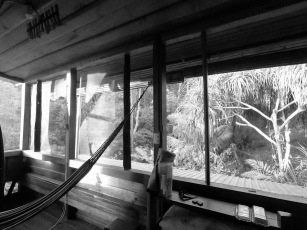 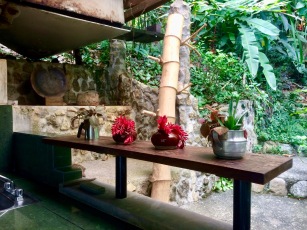 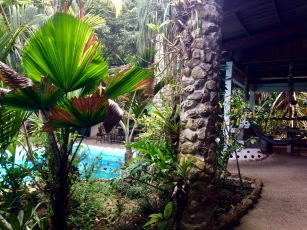 As I mentioned, after some discussion with the owners the previous day we decided to do the white water rafting trip today.  It didn’t start until after 12:00 so after we had a fantastic breakfast we went on a hike on the property.  Wow (I can’t come up with any other descriptive word)!!  Annette is a birder and is very knowledgeable about birds in the area so she was pointing out so many different birds on our hike.  And I saw a TOUCAN!!!  Beautiful, and too far for a photo. 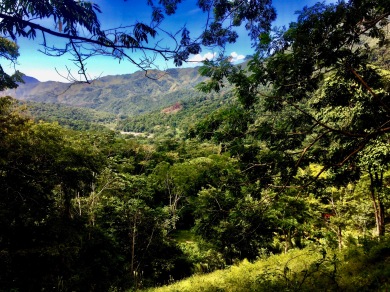 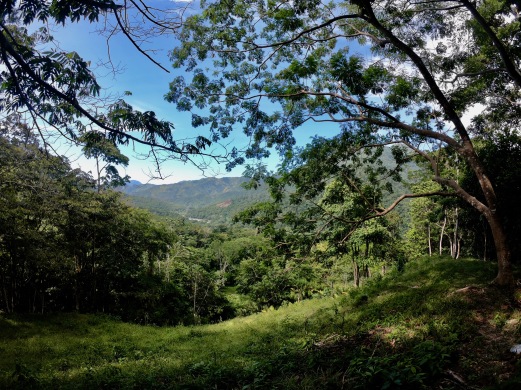 We were so hot, and we had time, so we went across the road to the river so I could see it and we could cool off.

Then it was time to head back for lunch and the white water rafting trip.  There were five of us in total; Annette and I, the raft guide, the safety guy and the photo/video guy.  We had lunch and walked down to the river to the rafts.  Turns out it was right where we just went swimming!  Because the river was very low we did some boulder ‘jumping’ up the river which was good fun.  Scared the shit out of me on the last huge one we jumped off of!!!! Annette had no fear jumping at all.  We then floated back down the river to where the rafts were, did some safety drills (lots of laughing) and headed down the river.  As I said, the river was really low so we had to get out and walk a few times.  So much fun! 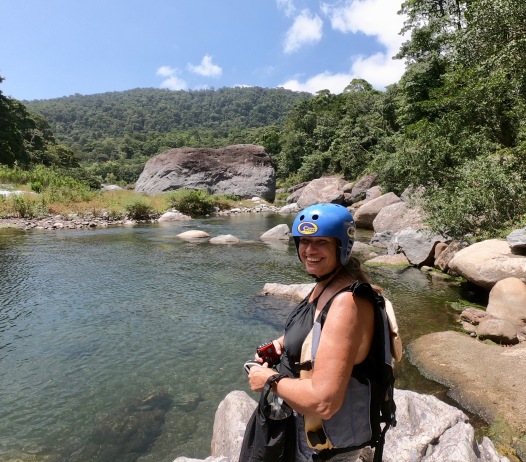 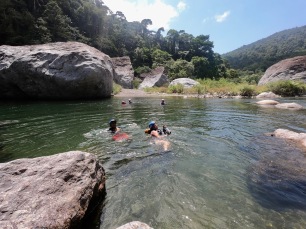 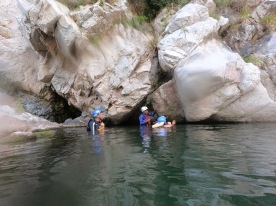 What a busy and amazing day!!!!  When we got back from rafting it was definitely happy hour in the pool, we had another amazing dinner and crashed for the night.  Oh, and we saw some really cool woodpeckers (like Woody the Woodpecker) and some toucanets (technically they were collared aracari) who had a nest in a dead tree with fledgelings at sunset.  Amazing!

The next day was departure day:(.   We had another delicious breakfast and just relaxed, took some more photos, until Eliberto picked us up at 10:30.  Annette had one last store to shop at (items to put in the cooler to take back on the plane), we had a nice lunch at the Beer Box (nice name) and Eliberto dropped us off at the airport.

The flight was uneventful…oh, except for the pilot telling us we weren’t allowed to sit in the exit row:-). Something Annette can relate with Jim Springer about!!!  Steve and Don were there on time (after spending several hours on Bonacca for ‘Thirsty Thursday’.  It was a wonderful trip and great to be home!