With two hundred miles ahead of us to reach the C&D Canal, we departed early from NYC… perfect timing to witness the arrival of one of the US Navy’s alien looking stealth warships as we sailed by Staten Island.  We gave it a wide berth as it passed by us in the opposite direction with an entourage of military zodiac escorts to our port side; however, I couldn’t help turning on our radar.  Sure enough, the massive warship appeared on the display as nothing more than a tiny blip, no more distinct than even a small marker buoy. 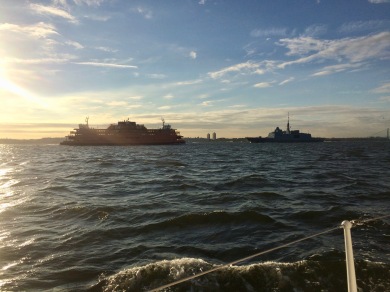 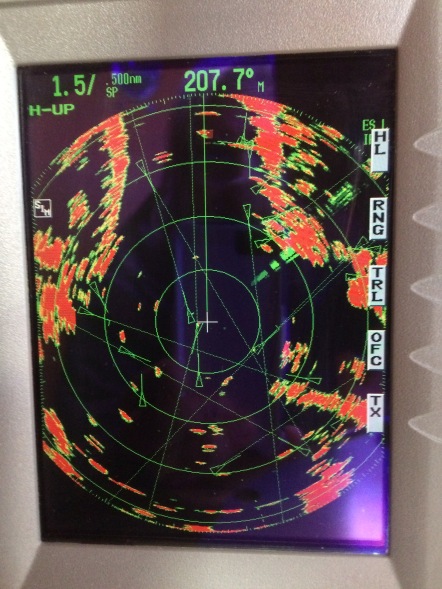 Lots of boat traffic but no stealth warship 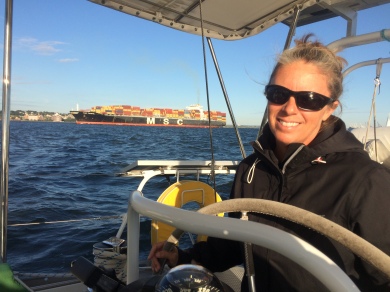 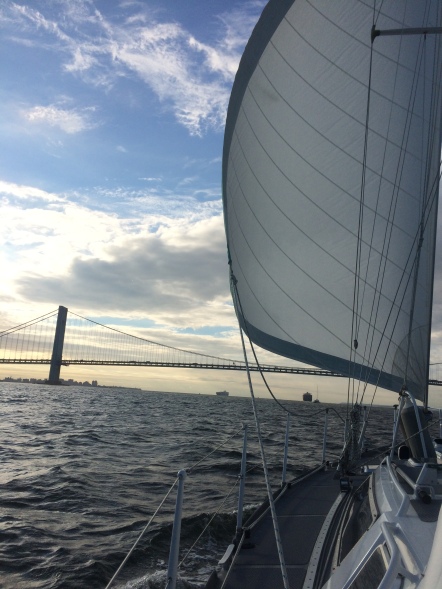 Hugging the coast, we were never more than about three miles offshore.

The only excitement was another bird, no larger than a small finch, which seemed to be well farther offshore than we would have expected (much like we had seen on our passage from St. Marys, GA to Charleston, SC) that decided we needed another crew member aboard Exit.

Except this tiny bird obviously had high ambitions.  It flew straight into the cockpit and landed on the wheel, seemingly to proclaim itself our new helmsman.  For about ten minutes, it balanced there; and, as the autopilot made slight adjustments in our course causing the wheel to turn left and right, it appeared comically that the tiny bird was actually steering Exit.

After a bit, it flew out of the cockpit, only to return to its perch atop our wheel a few minutes later and resume its hilarious impersonation of a undersized, feathered skipper.  Shortly after that, it stationed itself atop the lifeline, now apparently taking over the watch duties.

Eventually, our little comedian must have realized that flying would be a much more efficient and speedy approach to reaching its destination than sailing, and it flew off into the distance, finally disappearing from view.  It took quite some time before we were able to stop laughing.

Fifteen to twenty knot winds and favorable currents allowed us to feel like we were flying down the coast for twenty-four hours.  Although, in exchange for the fast pace, we reached the Delaware Bay hours ahead of when we had planned and were met with winds that tapered off and opposing currents, forcing us to motorsail for almost the entire ten hours we spent crossing the bay.

During this time, we continually debated whether or not we were going to attempt navigating the C&D Canal at night.  Though the canal is rather wide, we were very nervous about what we anticipated would be a mostly unlit and nerve-racking three hours.

A couple of hours before sunset, we began to see the outline of a massive structure in the distance.  What we first thought was a huge freighter, slowly materialized into the gigantic cooling tower of a nuclear facility, steam ominously pouring out from its top.  There would be no rain collection today, even if the overcast skies decided to make an offering. 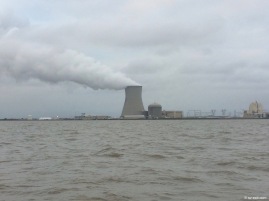 By the time we reached the entrance to the canal, the sun had nearly set and we were already having a difficult time seeing where we needed to be going.  This solidified the decision that we would drop anchor and wait until morning, when the canal would be a much more friendly passage.

Not long after setting anchor and having dinner, a loud roar in the distance prompted Kris to ask if we were hearing a plane passing overhead.  The answer came moments later, when the dull roar was interrupted by a louder noise, followed immediately by what sounded like a boat engine revving at high rpm for a short period.  It sounded unmistakably like a boat had just run aground.

As we scanned the darkness, at last we saw what looked to be a flashlight twitching back and forth in the distance. After some time, a boat with a flashing blue light appeared from shore and approached the scene.  We were a bit confused when the patrol boat stopped short of coming alongside the flashlight, and then, a few minutes later pulled away and departed as what appeared to be a Coast Guard helicopter circled briefly overhead.

Intrigued, we turned on the VHF and were subsequently treated to far more entertainment than most people probably found on the TV that night.

As the drama unfolded in the form of confusing lights in the distance and radio exchanges between multiple boats with flashing lights and the shore, we slowly learned what had transpired.

Apparently, a twenty to twenty-five foot jet boat carrying an idiotic captain and three passengers had attempted to enter the C&D Canal at a much higher rate of speed than the darkness would warrant.  Either failing to notice or ignoring the brightly flashing green light of a navigational warning marker, they had slammed into one of the earthen jetties jutting out on both sides of the canal entrance, fully running their boat aground… not too smart.

Fortunately, only one person was mildly injured with head lacerations.

The boat with flashing lights was Fireboat #5, which had arrived on the scene, and transported the entire group to a nearby hospital for further evaluation.

We felt rather wise in having made the decision to drop anchor for the night, choosing to abort our night voyage through the canal.  Not that we would have run aground on the jetty; but still, we had heard reports that floating debris left over from the aftermath of Hurricane Florence weeks before was still present from the canal all the way down the Chesapeake, and we were grateful that the Coast Guard and marine patrols would not be answering a distress call from us that night.

The following morning we passed the stranded jet boat, still sitting completely dry on the jetty.

For over an hour after entering the canal, we were further entertained by the numerous radio calls from what seemed like every boat following behind us, who hailed the Coast Guard on the VHF to report a boat which they had seen aground at the canal’s entrance.

As we exited the C&D Canal two and a half hours after lifting anchor (awaiting the morning light had also given us the benefit of running with the currents), we found ourselves once again in the Chesapeake Bay.

Annapolis was another fifty nautical miles away, and we had already begun to see more and more of the floating logs and debris we had heard about, so we made the call to stop mid-afternoon, about ten miles south of the C&D Canal, and make the final push for Annapolis the following day.

Furthermore, we had just received a text from our friend Benjamin, aboard Crackertale, who we had first met at Block Island all the way back in August.

We had nearly, but not quite, crossed paths again a number of times since then.  Amazingly, he was currently only a few miles away from our present location, also headed for Annapolis.  We hailed him on the VHF and agreed to meet on the Sassafras River, right next to where we had planned to anchor anyway.

As it turned out, he decided to continue a bit further on after we had already set anchor, choosing to take advantage of favorable winds and currents that were much more critical for someone sailing single-handed on a small boat with only an outboard engine for supplemental power.  It looked as though we would have to wait for Annapolis for the reunion drinks. 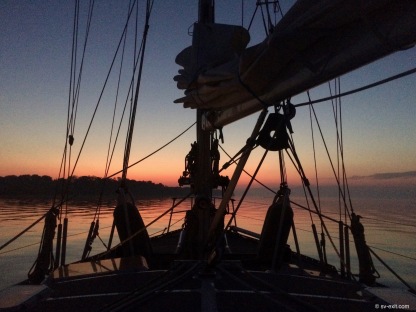 When we awoke the following morning, a heavy fog had completely obliterated any visual references in every direction.

Our only previous experience with fog had been departing Port Canaveral, Florida, back in February, just days before we set out for the Bahamas, where we had instantly learned just how daunting and intimidating sailing in fog could be.

With visibility effectively non-existent, we immediately recognized that this was a challenge we had absolutely no intention of undertaking, so we sat back to wait, patiently hoping it would start to burn off.

Not long before noon, the all-encompassing white blanket of fog had begun to lift, revealing the shadowy outline of the nearby shore.  Visibility was still less than half a mile, but we had become much more familiar with using our radar over the past six months than we were in Port Canaveral, and felt confident that we could set out with the optimism that the fog would continue to lessen.

Though the radar proved invaluable, it only lessened the degree of intimidation.   With senses on high alert, and eyes constantly shifting focus between the radar display and our surroundings, we carefully creeped along.  It was amazing how, with the radar, we could still identify not only boats, but also navigational markers and even debris in the water.  As long as we didn’t encounter a stealth warship like the one as we left NYC, we should be good to go.

Slowly, we made forward progress.  We learned from Benjamin over the VHF that he had lifted anchor before we had, but had second thoughts as the fog thickened outside the bay he was in, and had dropped anchor again to await better visibility.  He lamented not having a radar himself at that time.

Four hours later, we were passing the Baltimore channel intersection on the east side of the Chesapeake.  The fog had slowly, but steadily, receded and we now had three mile visibility and very calm conditions on the water.

We noted two things: 1) Baltimore was the farthest north we had gotten on the Chesapeake in our preliminary explorations aboard Exit just after purchasing her, before we started heading south, and 2) we had just surpassed five thousand nautical miles in our travels aboard Exit.

As we passed underneath the Chesapeake Bridge, we felt an overwhelming sense of deja vu.

Two hours later, we arrived at Annapolis.  The enormous Annapolis Boat Show was on its’ last day, and boats were everywhere.  Back Creek, where we had sat for months while we first tasted the lifestyle of cruising, was chock-full and we ended up having to anchor at the south anchorage in the bay just outside Annapolis.

We had come full circle, back to our old stomping grounds.

An hour or so later, Benjamin sailed up and dropped anchor.  Shortly afterwards, he stopped by with his brother and a friend who had met him upon his arrival.  He had also brought a half-full half gallon of Kraken rum…

One thought on “Back To Back Creek” 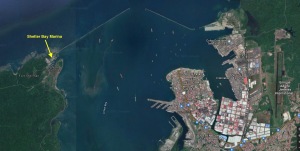 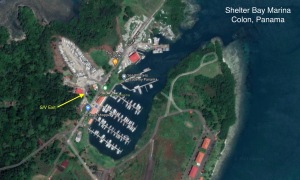