Unfortunately, our timing for living on a 46 foot aluminum yacht sitting on the hard couldn’t have been worse.  The entire area surrounding Washington DC is in the midst of a heat wave.  Not just any heat wave but one of the worst they have ever seen.   On July 14, the mercury just about burst the top of the local thermometers as temperatures reached 100 degrees (one digit hotter than the previous 1954 record).  This didn’t factor in the notorious east coast humidity, which the weather person on TV kindly informed us made it feel like it was 105 degrees!

Fortunately for us, Borneo and Southeast Asia, had acclimated us to brutal temperatures and humidity for the past 8 years, so we actually have faired better in our aluminum frying pan than many around us.  It is the evil little bugs feeding on us constantly that threaten to be our undoing.  Normally, I am the preferred meal of insects; but in this case, Kris is the one who is speckled from head to to with little red welts, with many forming large blisters, causing such writhing and intense itching that a person nearly has to scratch their flesh completely off to find any relief!  You’d think Borneo would have been more of a source for bug misery than Maryland! 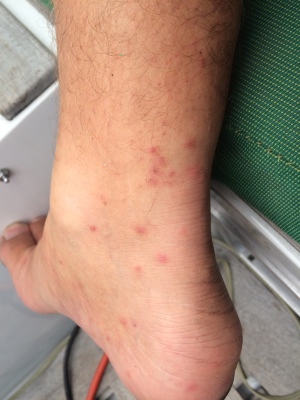 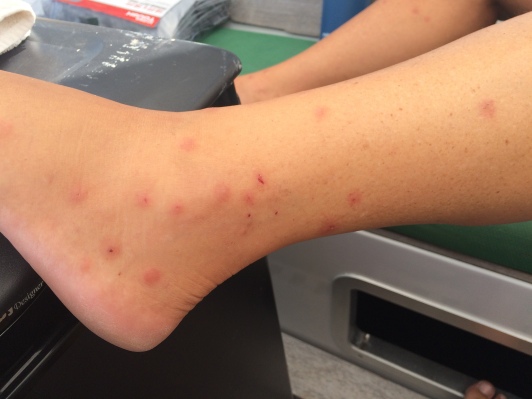 With temperatures on the surface of Exit’s deck reaching 110 degrees, the marina pool is beyond enticing.  However, because we’re not paying for a slip on the water ($50 a day compared to the $10 a day we were spending on the hard) the charge is $8 per person for a pool pass.  We have opted to go cheap and tough it out.  That having been said, we always try to find the silver lining, or at least a bit of humor, in every seemingly adverse situation we face.   Two very crafty ducks, far more gutsy than we are, seem to have come up with a solution.  Almost every night after the pool has been locked up, they slip through the iron fence constructed to keep out the riffraff, hop in the water and enjoy the pool all to themselves, thereby saving themselves $16 a day for pool passes.

We continue to try and decipher the various systems aboard Exit, take inventory of everything aboard, and undertake what seems like endless daily rituals of cleaning and organizing…activities we will undoubtedly be doing for quite some time!  Though each day ends with us feeling hot, sweaty, dirty, exhausted and just wanting to be on the water, we repeatedly realize how fortunate we are to have the opportunity to really get familiar with the many of the basic systems below decks before undertaking the much more monumental task of actually becoming capable sailors.  It will certainly be a rewarding and long awaited moment when we finally splash Exit and return her to her rightful home…the ocean.  She’s been dry for, I believe, close to a year now and I firmly believe she may be looking forward to that moment even more than we are!

So far we have had very few guests aboard…but then again who wants to hang out on a sailboat in a gravel parking lot?!  Pete McGongle – our broker from Seattle stopped by when he was in Annapolis for business, took us to breakfast, dropped off complimentary Swiftsure hats and bag, and reiterated that “we just need to get in the damn water!” … Dave Skolnick – the captain who will be doing the additional training needed to sign us off for our insurance company stopped by for a preliminary meeting…  and Gene (the previous owner of Exit for 17 years), who graciously stopped by with his longtime sailing partner Charlie to try and lend some insight into what he described as a “quirky but incredible boat”.  Charlie, in a small world moment, declared he too was a WSU graduate and confessed with a laugh, “I have never seen Pullman, WA listed as a hailing port on the transom of any boat!”

Currently the plan is to sail to Back Creek, just outside Annapolis, once we get the final work done here and spend some serious time learning the above decks systems and electronics with Dave before extending along the east coast a bit (somewhere between Washington, DC and Maine) or even the ICS (Intracoastal Waterway ~ 3,000 miles of inland waterway which runs from Boston, southward along the Atlantic seaboard and around the tip of Florida).   Spending as many of our days sailing as possible, followed by anchoring or mooring near shore for the night, will help us get comfortable in our coastal explorations prior to attempting overnight passages or slightly further offshore excursions.  We have no reckless ambitions to head for the open ocean until we know much more than we do now!

As the summer starts slipping by and fall sets in, we’ll have the opportunity to head further south looking towards the Bahamas or the Caribbean once the hurricane storm season begins to wind down in early November…if we can just get in the damn water!!!!!!