Deja vu.  For the third time in six weeks we are traveling across the USA…15,000 miles total.  Ironic considering Kris had only traveled to the East Coast once in her life.  Our initial trip of the three was the first time we climbed aboard Exit.  The second trip was a quick three day plane ride so we could be present for the sea trial and survey of Exit (similar to a house inspection prior to sale).  This is our third trip.  Back to Amtrak.  Same route.  Only this time we have one way tickets and 500 pounds of luggage spread out in twelve different bags and suitcases!

Wait a minute… I sense a bit of confusion building in you.

I can hear you thinking “But you said…”

It’s like pages are missing from the book, only this is a digital blog.  Ok…I do understand my obligation as a writer to actually fill in this gap.

First, let me say how fitting it is that we are making this passage on Independence Day.  While we were abroad, we joked that July 4th was the country’s day of independence, but ours was in actuality October 2nd – the day we left the USA in 2008.  Now we have two: October 2 (our first exodus) and July 4 (our exit to Exit).

Our initial conversations were largely on the lines of, “Shit. What have we done? There’s no way we should be considering buying this yacht.”  Which was not entirely  untrue.  But good decisions generally come as the result of a give and take process, thought out thoroughly and deliberately.  Very few are set in stone from the outset and rarely do outcomes not differ from person to person.  So it wasn’t just a cut and dry decision of right or wrong.

Purchasing too small a boat was going to potentially be a dream killer.  We had read about people living aboard 30-39 foot yachts very happily while successfully navigating the ocean.  However, we had been aboard dozens of boats by this point (in SE Asia on holidays and in the USA) and had done our training on 36 foot sailboats in Thailand.  While we had surprisingly learned over the past eight years just how little we could get by with, we had also come to accept the fact that we were no longer in our 20’s.. or 30’s… or me even the 40’s.  Twenty five years ago or if we were already salty sailing veterans then maybe.  But now…even a posh 50 foot yacht makes for quite a small house and, shy of sailing starting to turn back our internal clocks again, we will not be getting any younger.  So we somewhat arbitrarily agreed on a minimum length of 40 feet.

Purchasing too much boat was just as much of a real concern.  Financially, the initial purchase would deplete our reserves, annual maintenance and operation would be more costly, and as novices we had a tangible limit as to how much boat we could physically handle without crew.  In Thailand, the sailboats we trained on were 36 foot length.  Ten feet bigger was ambitious but doable; much bigger was overzealous or even dangerously foolish.  So, 47 feet became the limit we would consider.

With an agreed size range of 40-47 feet to work within, we also had to consider construction materials, layout, overall condition, and equipment aboard.  This was where the endless possibilities of prioritizing and compromise became critical.  Without getting too deep into a subject entire books are written about, suffice to say our priority was in strength, stability and safety.  If the yacht had these qualities, everything else could be added or omitted at later dates.  This gave us the ability to grow into the capabilities of our sailboat over time.

It’s amazing how quickly the field narrowed when confronted with our need to find a yacht that fit our size requirements, gave us the ability to live aboard full time, was not in need of major repairs or refitting, and would give us the strength, stability and safety for eventual extended blue water cruising to go anywhere in the world we chose…even to latitudes beyond 50 degrees. 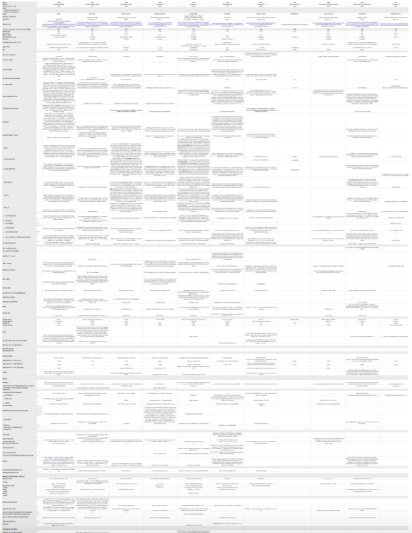 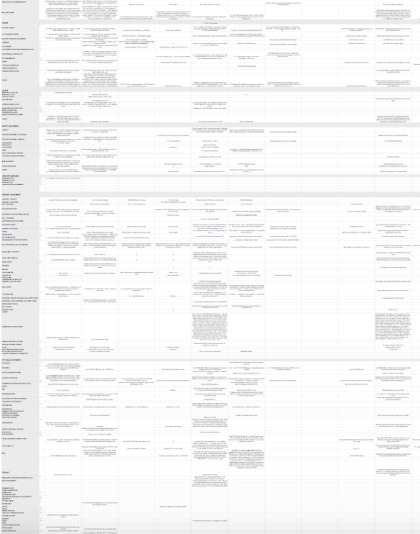 An obvious strategy would be getting a smaller, simpler sailboat to learn on with the intent of selling it in time and acquiring something more suitable as our competence and confidence grew.  We considered this very seriously, and more than likely would have pursued this option, except for the experience we were already in the midst of.  It would become the exact same process repeated.  Yes, we would be much more knowledgeable about what would or would not work for us.  But the added complexity of living aboard the very sailboat we would be trying to sell, while locating the one we wanted to buy, as well as the need to perfectly coordinate a sale and purchase almost simultaneously (not to mention the financial hits of depreciation, broker fees, travel costs, blah blah blah) made for what seemed would be a convoluted mess that would be an almost certain recipe for disappointment, headache, and even disaster.  If we couldn’t pull it off, we’d have limited our possibilities or even derailed ourselves.

Exit  was listed at a price well out of our range but we had no idea what the final agreed to price could be.  The chance that they would lower the price by one third or half was not realistic so that left the option of us being able to justify raising our budget by a yet undetermined amount…

When we climbed aboard her, of all the boats we had been on (including even the ones we went aboard that were WAY out of our price range), this was the first time that it immediately felt right.  No, it wasn’t perfect.  Still it had everything we would need in the immediate future.  It was a visceral reaction but sometimes those are what speak to you the loudest.  This was an expedition style cruiser that would be capable of taking us anywhere we wanted to go when we were ready.

In the end, it became a question of how far we could stretch the budget and how far the owners would budge.  Our perspective became that, for us, the biggest risk of buying Exit would be running out of money.  This would result in us either having to earn more money (something we had always anticipated but just did not know when that would be) or having to sell her.  And, since we had already established an ability to gain employment in the very tropical locations we would probably be traveling to, the greatest unknown was simply when we would have to seek work again.  If the owners would come down in price enough, we decided that this risk and complication seemed more digestible than the turnover approach.

Oh ya, and the other complication being that, while we were racing toward the east coast aboard Amtrak, some underhanded and inconsiderate asshole had made an offer on Exit!!!!!!  Arrrrggghhhhh!

When we called Pete to touch base, he gave us a sliver of hope by informing us that the offer on Exit hadn’t been accepted and the owners and potential buyers were about $10,000 apart.  Therefore, we were still in a situation where we could make our own offer.  Kris and I talked and talked, trying to pull aside all the curtains of uncertainty, peeking in every nook and cranny to make sure we weren’t missing something, hoping the answer would illuminate itself for us.  Finally, we decided. 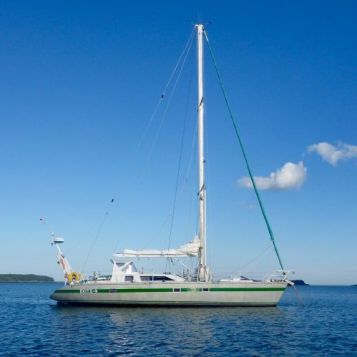 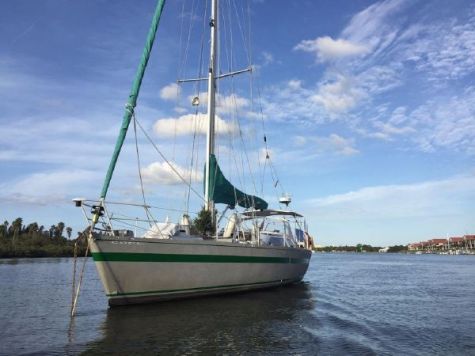 So we put out an offer that equated to 20% over our intended budget.  Hopefully we would save some of that back by not continuing to hemorrhage money over the next six months trying to acquire a different boat.  And hopefully we would spend much less additional money after buying a boat that was so well equipped and required so little immediate maintenance.  But, in the end, we were willing to accept the fact that we simply needed to anti up a bit more to help insure long term success (and survival).

Instead of a delivery to the west coast (either by truck across the USA or by skipper through the Panama Canal) which would have cost $20,000+, we realized it was going to be easier to get us to Exit instead of the other way around.  Pete also firmly believed that an East Coast start was in our best interest as marinas and safe anchorages on that side of the States were nearly endless compared to the rocky, often stormy West Coast with far fewer options which would be a much less forgiving environment for inexperienced sailors.

Ultimately, the consolation during all the exhausting research, frantic decisions, and stressful moments was the undeniable fact that this is actually happening now and we are really going to be the owners of Exit!!!!!!!!

Which brings us back to our third trip across the USA in six weeks.  4th of July.  On Amtrak.  Five hundred pounds of belongings.  Twelve bags.  Watching the sporadic bursts of both fireworks in the sky as well as magical fireflies flickering their lights alongside the railroad tracks as we wait on a cutout sidetrack for a freight train sharing the same track headed in the opposite direction to pass.  Headed for Maryland.  Headed for our exit…make that our Exit!!