Despite all the hype, The Devil’s Backbone (or possibly we were far enough west that it was more A Minor Demon’s Hipbone) provided no drama, though we did decide to motor through it (sorry Dena and James).

By 2:00pm, we were sailing in the North Atlantic with an incomprehensible fifteen thousand feet of ocean beneath our hull.  The water color is an indescribable shade of blue.  We had raised our sails and killed the engine as soon as we cleared Ridley Head Cut, and didn’t need it again until we were approaching Little Harbor, Abaco fifty nautical miles later.

Ten to fifteen knot winds from nearly behind us, a slowly building swell, and lots of sunshine made for a great day of sailing.  We didn’t see another soul on the water the entire day.

Little Harbor was settled in 1951 by Randolph Johnston, an renowned artist/sculptor who had detached from society by sailing away aboard a schooner with his wife and three sons.  After sailing into the harbor,  they decided it was the perfect place to stop.  They lived in a nearby cave while they built a thatched home and eventually set up what is still the Bahamas only bronze foundry so Randolph could continue his sculpting.

His sons still reside in the compound and continue the sculpting tradition.  Pete’s Pub, a laid back outdoor beach bar, and The Gallery, which displays/sells bronze sculptures cast in the local foundry, were both built by son Pete Johnston.

We chose to anchor outside Little Harbor in the much larger bay it faced into.  This turned out to be a good decision as Little Harbor, limited in space to begin with (as the name suggests), was already pretty full to the gills with occupied mooring balls and a scattering of rather sad looking sailboats.

After a couple of days we moved four miles north to Spencer Bight and anchored just outside a small nature reserve.

For the first time, we managed to raise the anchor, move to a new anchorage, and get the anchor set, all without ever having to fire up the engine.  Typically, running the engine to charge the batteries while using the power hungry windlass while picking up anchor, and using the engine when anchoring, backing down to properly set the anchor is the norm.  But, as an exercise, it was rewarding to know we could do it if necessary.

In addition, it finally looked as though a dive excursion was in the cards for us.

About two miles away from where we were at anchor, the park had set up mooring balls for dinghies and small boats to tie up to while snorkeling.

We did a preliminary dinghy reconnaissance mission to Sandy Cay, around which nearly a dozen mooring balls are stationed.

After tying off, we hopped in the water with fins, mask and snorkel.  The conditions were good and the visibility was probably between ten and twenty meters.

For the first time since arriving in the Bahamas, were blown away by what we saw underwater.

Lining the edge of a vast sandy channel, about ten meters down, was an remarkably healthy reef system.  The population of hard and soft coral, as well as fans and sponges, was extensive and diverse.  Also present was a wider variety and abundance of fish than we had seen during the past three months combined.

In thirty minutes of snorkeling, we managed to see a large nurse shark cruising through, a bonnethead hammerhead shark foraging at the edge of the sandy channel (the first time we had ever seen this species), what we suspected was a Caribbean reef shark passing by, as well a meandering green turtle.

We were exhilarated at the prospect of finally doing some exploratory scuba diving.  We had long anticipated diving as being an activity we could undertake regularly while living aboard Exit, but alas, it had not yet happened outside the occasional use of tanks to facilitate work on the boat below the waterline.

While the potential to scuba dive while living aboard a sailboat is certainly appealing, the actual logistics involved in scuba diving from your own boat are much more complicated than it might initially seem.

Without having a dive shop to provide a dedicated and spacious dive boat as well as captain that remains aboard, either the Mothership has to be able to be properly secured at the site, or everything has to be fit into a dinghy less than ten feet long which still needs to be able to be secured at the site.  It would be hard to imagine a more sickening feeling than surfacing from a spectacular dive only to realize that your dinghy or, even worse, your sailboat had drifted away.

The existing mooring balls at the site were not set up for boats larger than about twenty feet, which meant we’d be diving from the dinghy.

The distance from Exit to the mooring balls was about two miles.  I don’t think the old 8hp Yamamama, running on only one of two cylinders, ever would have made it with two people and all the dive gear aboard, even limping along with no chop on the surface.

Y’mama, on the other hand, with all fifteen of her horses available, was up to the task.  Two miles each way… not a problem.  We even managed to get up on a full plane loaded with two people and the dive gear in choppy water.

The new outboard, a bit of a luxury in just getting short distances to and from shore, turned out to be an absolute necessity for diving.

Once we had reached the mooring balls and tied off securely, we geared up and returned to the world of fun diving. 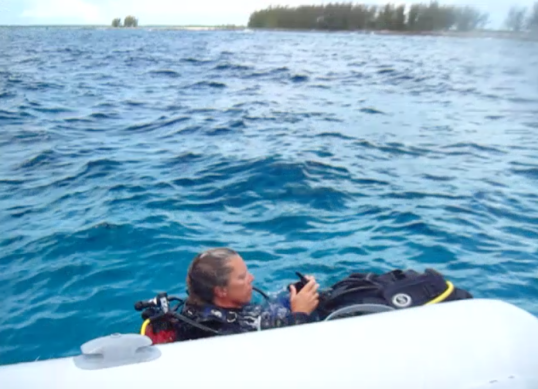 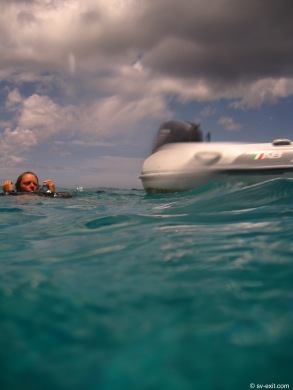 After hundreds of unaccompanied dives in SE Asia, we felt completely comfortable on our own without a guide.  Now it was even more rewarding to be doing it from our own boat.

Just over a hundred minutes later we surfaced back at the dinghy, air still in our tanks.  It was good to see we still had it.

While the bonnethead shark didn’t made another appearance, we were graced with the presence of a two meter nurse shark, a juvenile grey reef shark, a green turtle, and a number of very large spotted eagle rays that passed gracefully back and forth over the sandy channel repeatedly, right next to us.

Furthermore, a pod of dolphins, numbering between a dozen and twenty, approached us from further out in the channel and passed by.  One of the more curious dolphins briefly broke ranks with the others to come check us out and show off with a short display of underwater acrobatics… amazing!!!

Overall, the dive was excellent.  Certainly not as much weird macro stuff that we had become spoiled on in SE Asia, but well worth the effort involved.  Good enough that we went back the next day for another dive. 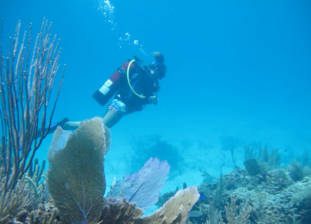 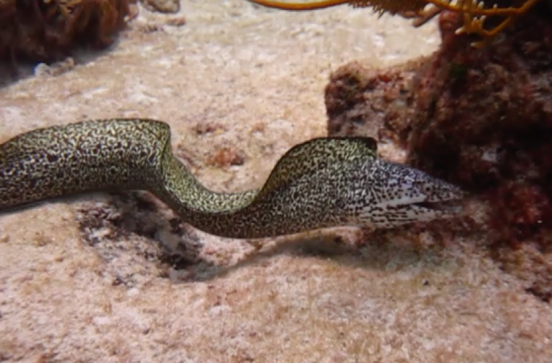 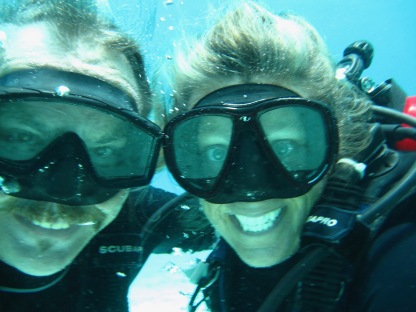 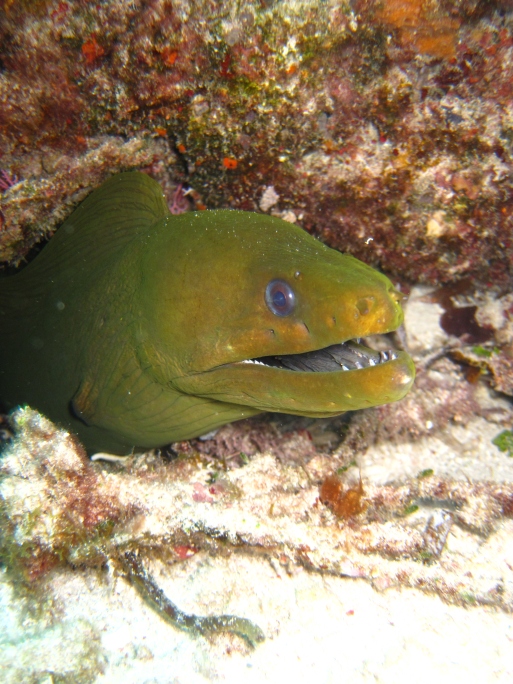 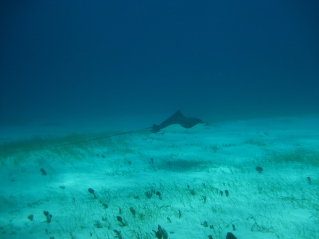 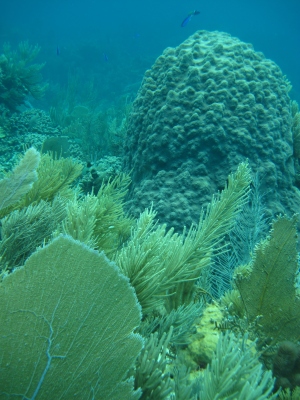 Tank fills are a logistical challenge yet to be sorted out.  Until we figure out a way to convert our unused washing machine into a dive compressor, we will have to get tanks filled at dive shops as the opportunities arise.

Nevertheless, we felt reenergized and somewhat redeemed to know that diving had, once again, made it’s way back into our itinerary of current activities.