One week ago we arrived in Deale, Maryland.  Our delivery to Exit was a bit comical.   With five hundred pounds of possessions in tow stuffed into a dozen bags, we received more than a few strange looks from people.  Our standard line became, “Yes, quite an embarrassing load for a holiday…but not bad for moving!”  Still, with that much gear, the option of cheap public transportation out of Washington DC was just not gonna happen this time.  While we rumbled through state after state on the train Kris’ research uncovered a chauffeur service that promised us an SUV capable of hauling everything in one load.  At $150, it was financially like swallowing a golf ball…painfully uncomfortable.  However, the logistics of getting a rental car would be ridiculous; and the very real possibility of standing outside Union Station looking an Uber car jam packed, with bags still sitting on the sidewalk, forced us to bite the bullet.  The person Kris corresponded with must have been a rocker (or at least a musician), because he said he was going to give a discount (yes, the $150 was the discounted price!) based on the fact that I had a guitar among the luggage!! When our sharply dressed driver stepped out of a sleek, bad-ass black Suburban that looked like it was more at home shuffling VIPs and dignitaries, we had to laugh.

The plan seemed pretty straight forward.  Spend a couple of days going through all the lockers aboard to get a preliminary idea of exactly what was on the boat and where it was located as well as start familiarizing ourselves with the different systems and how they worked.  Unlike a lot of new house purchases where people find a plethora of junk left by the previous owners, Exit was loaded with stuff we really needed or eventually would or could need.  Having just returned from Borneo, we were certainly lean on typical “homeowner possessions” so we were ecstatic that linens, cookware, dishes and utensils, cleaning products, extensive parts and spares, and tools (a collection that would satiate even the most hardcore home handyman) were already aboard.

To the outside observer, it would have looked like a scene ranging from kids opening Christmas presents to an airplane passenger stepping into a 747 cockpit trying to understand what all the switches and levers were for! Typical comments included profound utterances such as, “What in the hell is that?”, “How do you turn this on?”, “Is it okay to flip this switch?”, “Where did I just see that?” and “Have you found ‘such and such’?”.

Working in the transom locker 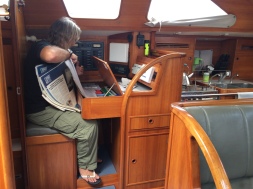 Getting the galley in order

Still on the hard, Exit was scheduled to have a new propellor installed before we splashed her late afternoon on the 7th.  Our enthusiasm and excitement was palpable, as was our sense of overwhelming intimidation, awe and confusion.  The following morning we were to meet an experienced skipper we had made arrangements with, who would help us get Exit a few hours north to a less expensive area where we could tie up to one of the mooring balls owned by the city of Annapolis.  Here we would have easier access to supplies as well as being in close proximity to Dave Skolnick – a very experienced captain recommended by our broker Pete who could help us further understand this perplexing new vessel.

Ultimately, this made sense not only to us (a bit of guidance – or a lot – would save us a lot of grief, help to ease the learning curve, and gain us incredible insight), but it also was a requirement of the insurance company.  Apparently, insurance companies are exceptionally wary of taking on the liability of underwriting a six-figure sailboat with people who don’t know what they’re doing… go figure!

As it turned out though, our plans to launch went entirely to shit when the mechanic Jeff informed us that our cutlass bearing (which sits between the prop shaft and the prop shaft tube) needed replacing.  What made this even worse was the fact that he had passed this information on to the previous owners a week before the survey was to occur!  Regardless of the implications and frustrations of the situation, there was little we could do except deal with it while reciting one of our favorite recurring observations… “It is what it is, even though it’s not what I thought!”

Even more problematic was the issue that, for some reason, the cutlass bearing was an extremely obscure size.  After a great deal of hunting and calling, Digital Prop located one that had to ship from Europe; but this meant we were now looking at one to two weeks for an arrival time… Aarrgghhh!  And while we never felt even an inkling of buyer’s remorse, we felt compelled to joke about the can of worms a European built yacht had opened up regarding the accessibility and availability of parts – “those damn French must really hate Americans cause they constantly utilize parts, materials and techniques that we don’t have access to!”  In actuality, we again and again noted that our patience and willingness to simply feed Exit whatever she needed went much further than it would have with a ‘lesser’ boat we would have already felt compromised to be into.

Incidentally, we can’t thank Danny (the owner of Digital Prop) enough for all his help to sort things out for us – even loaning us tools and a big floor fan to try to keep down the heat inside Exit.  Though he was relentlessly busy every day we stopped by, he always made time to talk to us, help walk us through the process of choosing between endless options, and even just take a break to chat with us.

Again and again, we found ourselves being offered unsolicited assistance from random people whom we had just met, repeatedly showing a side of human kindness that continually forced us to remember that there is a much smaller population of assholes than we may give credit for! Massive thanks to Paula and Tim of S/V Sprit for loaning us their small fridge indefinitely as ours couldn’t be used while Exit was out of the water!  Paula also pointed out to us, after hearing of our Borneo experience, that very few yachties can make the claim that their move aboard a sailboat represented a move UP in overall living space.  So true!

The delay was really a blessing in disguise, as we now had a much more realistic window of time to go through every locker and system much more thoroughly.  Becoming more familiar with Exit and her systems, as well as what was on the boat, allowed us a comfort level we certainly would appreciate once we got off the relative security of land and found ourselves finally on the water. 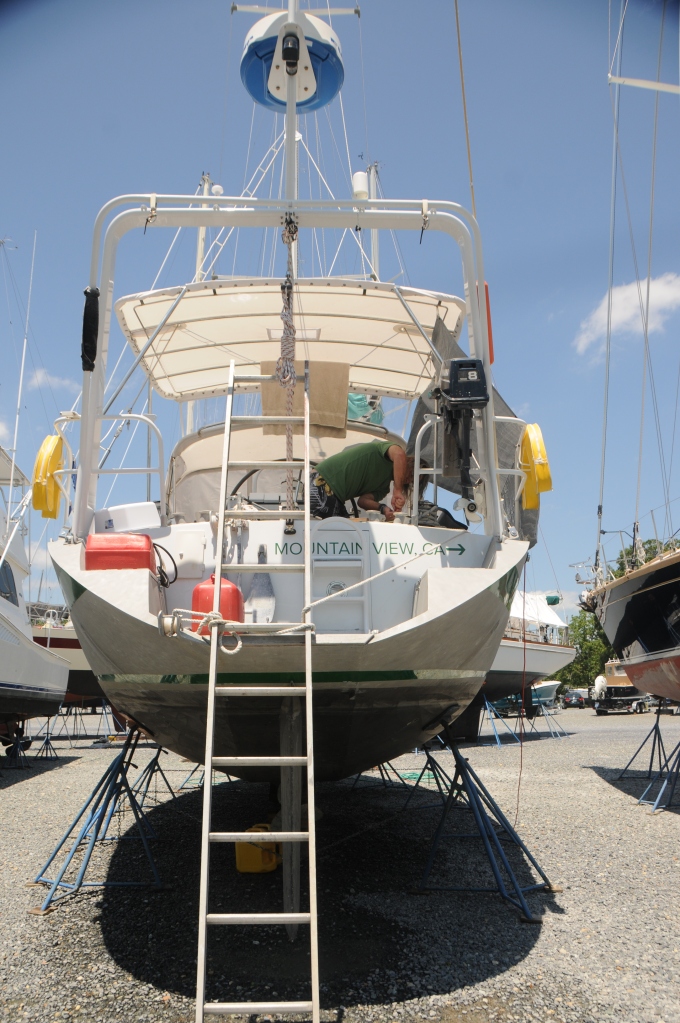 We made the best we could of the situation, traipsing up and down the ladder tied to our stern dozens and dozens of times each day for various tasks including mundane trips for ice, or the 100+ yard walk to the marina restrooms (our head was undergoing a lengthy process of becoming functional), or any other of a million different things that needed doing at any given time. 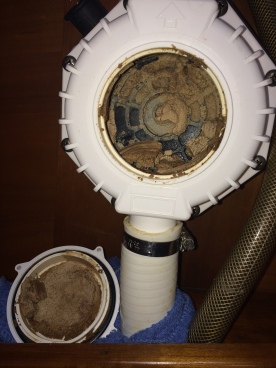 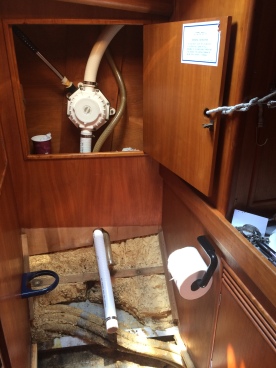 Ready for use again