After three months of sitting, we were finally on the move again.  Our ship had literally just come in and the shit we needed had just been offloaded.

Our windlass needed to be replaced and there was no way around it.  The 1/2” chain was fine, but well over-sized for our boat (every other boat we met carried 3/8”) and the 150 feet we had was only half of what we wanted/needed.  Our Rocna 25kg anchor was okay, but on the small side for our boat…

Panama shipping issues meant we couldn’t guarantee the arrival of equipment shipping from Europe, even though this more than doubled the prices, and we were severely limited with who we could even get products delivered from.

In the end, the winning combination turned out to be a new Lofrans Tigres windlass with three hundred fifty feet of new (downsized) 3/8” G40 chain attached to a new (upsized) Rocna 33kg anchor.

Because we were able to secure everything through a company that shipped directly to Bocas Marina as a marine retail supplier, we avoided having to use the area’s regular shipping outlet which routed every package through a Miami address, circumventing all additional customs fees and delays that seem to plague every other shipping company.  But at a fee of six dollars per pound, that would have added about four thousand dollars to the bill!

I may (or may not) have been able to sort out the necessary rewiring if that’s all that would be involved.   However, while it was clear that the footprint of the new windlass was far closer than anything else to the windlass currently bolted to the deck, it was still going to require some modifications and/or aluminum fabrication to properly mount to the current deck plate.

Thirty dollars an hour transferred the burden of success from me to him.  Instead of insurmountable problems, we were now paying for Martin to navigate through curious challenges.

And, as before, there was no fucking about.

We returned to Bocastown the morning after hearing the shipment had arrived at Bocas Marina.  We had no sooner dropped anchor in the South anchorage when Martin appeared alongside in his dinghy, ready to dig in.

I still hadn’t fully wrapped my head around how this was all going to play out.  We had to switch windlasses, which would NOT be as simple as unbolting the old one and bolting the new one into the existing holes… some kind of adaptor (presumably an aluminum plate) would need to be designed, fabricated, and fitted to the original deck plate… but the ground tackle we were currently sitting on would require the old windlass to be brought up… nearly a thousand pounds of gear had to get from Bocas Marina onto Exit… the new 3/8” chain and anchor would need to be deployed while the old 1/2” chain and anchor still had to come up…

Oh ya… and our generator, the only option for AC power aboard the boat (that would likely be needed for power tools) had given up the ghost in a gigantic puff of definitive white smoke back in August.

Oh ya… and we couldn’t forget about the boats anchored around us.

The initial hope of pulling this all off without having to tie up in the marina now appeared farther and farther fetched as we recognized endless questions that seemed, at best, to generate ambiguous possibilities rather than clear answers.

How could we possibly switch out everything while we were at anchor?

To me, we obviously still needed to think this through a bit more…

Martin then proceeded to unbolt the old windlass and pulled it off the deck.

The “boom…done” part of no fucking about.

It’s gonna be what it’s gonna be.  We won’t know what that is until we get into it…

The bold can-do attitude of a man who will only charge thirty dollars an hour while he’s fixing something.

Measurements were taken.  Discussions were had.

The small discrepancy between the new and old windlass’ bolt patterns created a far more complicated situation than we had hoped for.   With the hawspipe (the chain’s entry point through the deck) dictating the overall windlass alignment, we discovered the two front windlass bolts were exactly aligned with a thick aluminum cross-brace under the deck… shit.

It was at points like this that we really appreciated Martin’s approach.  While uncompromising in what needed to be done from the perspective of structure and safety as well as aesthetics, he recognized when enough was enough.  On more than one occasion, he pointed out when he thought the end result of something would be hard pressed to justify the cost involved.

Compromise, as is always the case on a boat, was inevitable.

For the aluminum plate, Martin reached out to a bloke named Kiwi Dave.

Day 1:  Dave is meeting someone else that day and can’t fit us in.
Day 2:  Dave discovers he’s mistaken.  He doesn’t have the aluminum plating after all.  Not even enough to weld multiple pieces together.  Delivery from Costa Rica could take six weeks (I was quickly regretting having pulled the other windlass).  We went to town desperately, though ultimately unsuccessfully, seeking an alternative.
Day 3:  Another call to Dave clarifies that he, in fact, DOES have the materials needed to fabricate our plate.  It will take twenty four hours and cost $80.
Day 4:  Dave has no power.
Day 5:  Sunday.  Lockdown.  Nobody goin’ no where…
Day 6:  Kiwi Dave delivers.  One ten millimeter thick aluminum plate welded, ground, and polished, in hand.

Of course, for the past week we have been in the south anchorage, far too close to other boats for our liking, still sitting on our old chain and anchor, with a very prominent empty space where our windlass should be.

Of course, for the past week it has also been volatile as hell for weather.  It is enlightening to learn that the transitional months between Panama’s typical wet and dry seasons, apparently September and October this year, can become very unpredictable with shifting winds, abrupt squalls, and intense lightning storms… fucking perfect.

This week the shit had been hitting the fan almost every night.

And the days were more cooperative in allowing no fucking about progress to forge steadily on.

At least with overcast days we avoided the 140 degree temperatures the bare metal deck reached in direct sunlight!

The old wiring came out… the hard way.  The new solenoid and circuit breaker were installed.  The aluminum adaptor plate was now in hand.  The plate was fitted and trimmed, and all holes drilled or cut.  The new wiring went in.  The new windlass control connector was installed in the deck.

The aluminum plate was secured and the windlass was bolted down… Ooooooweee, did that motherfucker look pretty!

Finally, the up button on the controller was pressed – the windlass gypsy sprang to life in one direction.  The down button yielded the same result in the opposite direction… Ooooooweee, did it run quietly!

We brought the dinghy to shore at Bocas Marina, remembered to mark the chain lengths (a much easier task to do before the chain goes in the bow locker rather than after), hoisted the new chain by hand into the dinghy and then fed it straight through Exit’s bow roller and into the locker with new windlass… Ooooooweee, did that come out of the dinghy easier than it went in!

The new Rocna 33 already sat on deck.  It gleamed brilliant silver in the fierce sunlight, like some fit Hollywood hero awaiting a grand entry just off-camera.  The new anchor was shackled to the new chain and reinforced with wire to guarantee the shackle pin couldn’t back out accidentally.

The moment of truth…

Now, remind me, how exactly are we going to…?

Ah, yes.  More of the no fucking about.

I almost missed it, and I was there.  Let me rewind and replay in slo-mo.

Engine on, Kris at the helm, me and Martin at the bow.  The new Rocna 33, with the new 3/8” chain attached, gets lowered ten feet (half way to the bottom) by the new windlass whereupon the chain is  snubbed off, moved off the roller and set alongside over the toe rail… (watch fingers!)  Then, while Kris slowly motors forward, the 1/2” chain is heaved up manually by Martin & myself, which is actually do-able with two people (watch fingers!), and snubbed off when we reach the anchor.  Kris pulls forward a bit more to break the anchor loose, and we finish hauling up the old chain and anchor (watch fingers!), letting Exit drift backwards on the mild breeze until we are happy with the spot.  The old anchor is lifted off the bow roller and moved out of the way, making room to move the new chain and anchor, which had been hanging off the toe rail nearby, back onto the bow roller (watch fingers!).  New anchor and chain down.  Out.  And set.  Wham… bam… thank you ma’am!  Old anchor and chain on deck.  Exit sitting comfortably on new 3/8” chain and new Rocna 33 anchor… and don’t forget that new Lofrans Tigres windlass on deck.  Ooooooweee… does that new gear shine!

We had managed to successfully switch out our windlass, chain, and anchor, while at anchor.  And by “we”, of course I mean “we paid less than five hundred dollars so that we could largely watch Martin turn insurmountable problems into curious challenges,” proving that shit can, in fact, get done provided you don’t overthink that which keeps you grounded.

That evening, as we toasted a pair of gin and tonics with extra ice and discussed picking up our new anchor and chain the next day to head somewhere new because… well, because we could… the wind started kicking up quite a stink.  For the first time, in a very long time, that really didn’t matter.

Sunset.  Fade to black.  And with that, the curtain closes on the final scene of our “Windlass-less Saga” drama… hopefully. 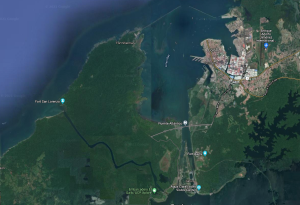