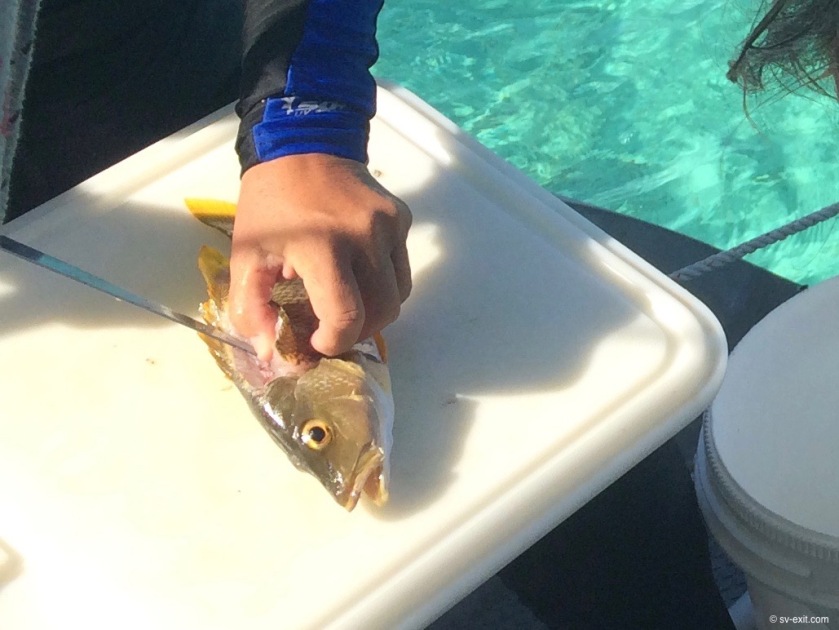 With a couple of great dives, and four now nearly empty tanks, we had succeeded in temporarily satiating our ever-increasing need for a scuba fix.

We had met back up with Jay and Tami, aboard their catamaran S/V Avighna, just outside Little Harbor.  Giving each other lots of space at anchor, but moving from anchorage to anchorage at a similar pace, we had gotten to spend quite a bit more time together.

Though fishing from the Mothership or dinghy had, so far, remained relegated to the list of things still yet to try, I was determined to change that.

When we purchased Exit, among the extensive inventory of equipment already aboard, were two fishing poles, quite an inventory of fishing gear, and even two spearguns.

I had never been spearfishing.  Frankly, as a scuba diver I had always considered it rather a rather unsporting way to catch fish, and never really been sold on it’s appeal.

However, Tami loves to spearfish.  And when she offered to take me along, I couldn’t resist.

And, I must admit, after joining her for an afternoon, though not a complete convert, I do have a more enlightened and enthusiastic perspective.

One of the factors which had made me very leery of fishing from the transom of Exit with a pole or hand line, was the inability to control what potentially bit on the hook.  I would be absolutely mortified to realize I had inadvertently hooked a shark, swordfish, or ray… not to mention a turtle… or dolphin (which I have been told are far too smart for that).

Even the possibly over-optimistic prospect of catching a fish I would be happy to eat but was fifty pounds more than I could consume before it spoiled lingered in the back of my mind.

As a conservationist, I have no problem with the idea of consuming certain fish I have caught myself.  It reality, it is probably a more sustainable method than a limited consumption of fish caught exclusively by commercial fisheries.

Yet, the idea of simply fishing for sport, catching fish species already struggling on the brink of extinction, or catching a fish large enough that the majority of it would go to waste, were all possibilities I had no interest in pursuing.

Spearfishing turned out to be much more challenging than I had ever imagined.  Without the benefit of scuba gear (illegal in many places including the Bahamas), the challenge of breath-hold freediving in tandem with being  limited to the use of what is called a Hawaiian Sling (similar to a large slingshot, but lacking the lock and trigger mechanism of a standard speargun which is also illegal in the Bahamas), increased the odds for the fish exponentially.

Fish are obviously far smarter than they appear.  As I quickly learned, they have a uncanny ability to sit in seeming obliviousness while you snorkel nearby.  But as you approach, with the intent of making them your dinner, they suddenly seem to become much more aware of your presence and movements.  Staying just outside the range of the Hawaiian Sling’s spear, which is no more than a couple of meters, they seem to mock air breathers repeated feeble attempts to hunt in their environment.

Tami’s prime target were lionfish.  Beautifully adorned with streaming fins, each containing a venomous needle at the end, we had seen thousands of these scuba diving in SE Asia, and had never seen them on a restaurant’s menu.  We didn’t know they were edible, and would have been appalled to see them being served.

However, in the Bahamas, lionfish are an invasive species which, at some point in history, human meddling introduced to the area.  With no natural predators to control their numbers, the ravenous and aggressive lionfish quickly began to overpopulate and threaten the health of other local species.

Eventually, the Bahamian government recognized the problem and put lionfish on a hit list, to be culled whenever found, if at all possible.

The fact that lionfish are not only edible, but tasty, makes for a unique opportunity.  Good, and free, meals  that directly and immediately aid in Bahamian conservation efforts… gotta like that.

As it turned out, we didn’t see a single lionfish during the entire day Tami took me out spearfishing.  On one hand, not seeing the lionfish was a bit disappointing.  On the other, I guess it was a positive sign that their numbers were finally being brought into check in some places.

By the end of the day, I had two snappers of very modest size to show for all my efforts.  Just enough for some fresh-as-you-can-ask-for ceviche to go along with sundowners, as well as one filet to fry the following evening. 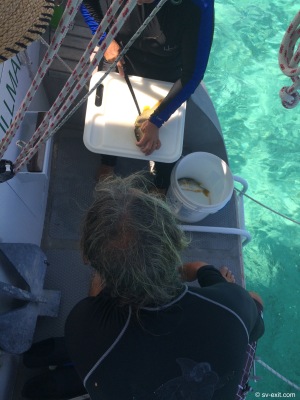 At some point, I still intend to get out the fishing poles and try my luck.  However,  obtaining a Hawaiian Sling may prove to be a much more workable strategy.

The ability to actually pick and choose what you are fishing for has obvious merits.

The foresight of knowing exactly the type and size of a fish before committing to killing it would appear to be a much more responsible and sustainable approach to fishing.

Tami was a legend to let me accompany her on her spearfishing expedition.  I have a newfound respect for the skills required and an appreciation for the advantages of the method.

My own technique as a spearfisherman, as Tami can testify, is suspect at best.  With a substantial amount of practice, I may someday have the ability to rely on the sea to provide dinner… but for now it’s far more likely to come from the grocery store.