One year ago today we made the bold statement, as we were setting out from Back Creek bundled in layers of clothing covered by our brand new and yet untested West Marine foul weather gear, that we would never be caught sailing so late in the Chesapeake again.

We only got out four days earlier this year… never say never.

After successfully launching Exit concluding our first haul out, we took the painful step of making a left hand turn instead of a right as we departed the channel leading away from Herrington Harbour North.

Which meant we were going north, not south.

Though the facilities at HHN were impeccable, its’ remote location made provisioning runs without a car impossible, and it seemed we had begun to wear out our welcome regarding courtesy rides from the office staff.

Back Creek was only a day away and made a lot more sense for final provisioning.

Finally, on November 8, with fuel and water tanks full, food lockers re-stocked, and a sexy new bottom (on Exit, that is) which we did not plan on seeing again until we reached warmer water, we set out from Back Creek and didn’t drop our anchor again until we reached Norfolk, VA. nearly twenty four hours later.

Sailing non-stop to Norfolk meant we got there in a day instead of the week we spent nonchalantly meandering there last year.

Taking into consideration that we were in the Chesapeake Bay rather than the open ocean and we had not seen winds greater than twelve knots since we weighed anchor at Back Creek, we decided to forego our own rule of putting a reef in the mainsail for the night.

Our typical philosophy was that, though the reefed main generally cost us about one knot of speed, a situation in which building winds during the night required us to put in a reef would force the off-watch person out of bed to help out (overnight we don’t leave the cockpit go on deck while underway in anything but the most benign conditions if the off-watch person is sleeping).  The resulting ten or so miles lost overnight with the main reefed was worth the peace of mind and better rest.

As the winds that night kicked up to twenty knots and the seas became exceptionally sloppy, I found myself noting a reminder in the log book… Reef at night, damn it!

As we cleared the Norfolk inlet channel into Hampton Roads Harbor the following morning, we found ourselves once again approaching Willoughby Bay (or The Hornets’ Nest as we had dubbed it last year) and the narrow channel leading into it that Kris had repeatedly vowed never to pass through again after our previous encounter with the wonky-placed marker and the muddy bottom.  Except this time, we had a twenty knot wind on our beam that would be trying to push us sideways.

We agreed that, with such a tiny margin for error at the shoaling spot, it was foolish to try to navigate the channel given the conditions.  Even if we followed our previous track exactly, and the shoaling hadn’t shifted in the past year, the wind on our beam would make it virtually impossible to hold a course at the slow speed we’d be traveling.

Without another anchorage option and little chance of the wind diminishing anytime soon, we’d have to find an alternative route into Willoughby Bay.

Our Navionics chart indicated a small channel existed on the west side of the bay, paralleling the shore alongside the Navy Base, though as we approached it, we were hard pressed to identify any markers.  We decided a blind entrance into the wind was preferable to the side winds we’d encounter in the other channel.

So, with rain pelting down in twenty knot winds, Exit bucked and bounced through the chop as we creeped slowly along the channel, straining to see the next marker in front of us.

Thirty minutes later, we were swinging on our anchor in almost the exact same spot we were nearly a year ago.

During our last running of the engine, we had realized that we weren’t getting any charge to our house batteries.  The solar panels and generator seemed to be working fine; it was just the engine charging that seemed to be lacking.  Further diagnostics ruled out possible suspects until I was left with the conclusion that it had to be the alternator.

Of course, with the weekend upon us, we were in limbo until Monday.  On a boat, it’s almost always about the waiting.

After gaining permission from a nearby marina to tie up our dinghy Monday morning, an Uber ride placed us at the front door of an electrical shop.  Their bench test of the alternator revealed that just about everything inside was fried.

Time for a new alternator.  Fortunately, they had one on the shelf. 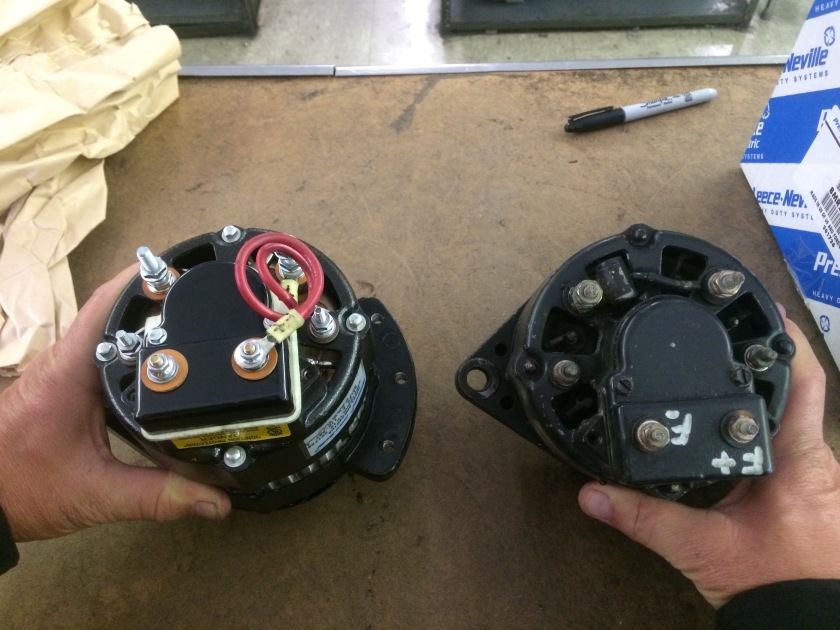 Unfortunately, they didn’t have a starter for us to get as a spare as well.  We have been struggling with the notion of just how many spare parts we should be carrying.  Exit already had shitloads of spares aboard when we purchased her, and we feel like we are better equipped with spare parts than most.  Yet, still, there is always the sense that we should have an extra one of these, or a spare one of those… just in case.

Ironically, this feeling seems to intensify after a breakdown… especially a breakdown for which we didn’t already have a spare, which inevitably takes at least a week to sort out.

On the other end of that tug of war rope is the difficulty of arranging deliveries. We don’t anticipate a week long delay so we don’t start the process early.  By the time a week has passed and we realize we could have arranged a delivery, it’s too late to start.  Hence, we tend to snatch up what’s available at a given time, and always have a long list to refer to when the opportunity arises.

The never ending circle… limited space and money for spare parts… having a spare part aboard seems to dictate that part will never break… the part that breaks inevitably will be one you don’t have a spare for… every breakdown prompts a review of the list of spares present/needed… every delay caused by a breakdown reminds you how much you want to be moving again… every time you get moving you have to make do with what you have onboard… rinse and repeat.

We got pretty lucky with the alternator.  The parts were in stock locally, reasonably priced, and we were able to complete all the diagnostics and repairs without the expense of bringing in a mechanic.  Even so, the process took about a week to sort out, from start to finish.

Instead of sitting around for another week waiting on additional spare parts, the decision to get moving again once the alternator was switched out was fairly easy to reach.  Especially here in the Hornets’ Nest, which is a central hub for activity if you’re a naval helicopter doing exercises, but not remotely near anything a visiting person on foot could possibly need or want.

Waiting out crap weather for a couple of days gave us time to finally narrow down the endless choices we faced  until we were left with two immediate options to choose between.

Ultimately, our goal of accessing the Pacific Ocean via the Panama Canal seemed premature to shoot for in the short term.  Crossing the Canal is a February to May prospect, and this seemed like too soon a commitment to enter the vastness of the Pacific Ocean for our experience level.  Maybe next season…

Heading back through the Bahamas towards the Caribbean, getting as far east as the prevailing winds would allow, with the intent of working our way back towards Central America to get south of the hurricane belt by July seemed appealing.  It also left Puerto Rico, Cuba, Haiti, and Jamaica as options to explore if the winds simply would not cooperate with a southeastern trajectory to the Caribbean islands.

Minimize the limits and maximize the options… perfect.

So… Option One was to inch south down the ICW, debating the perfect location, wind and weather conditions to jump across the Gulf Stream back to the Bahamas.  We could continue to utilize opportunities to restock provisions and acquire spare parts… essentially keep spending money.

Option Two was to take advantage of the small space between schizophrenic storm fronts which seem to be prevalent right now, jumping straight off from Cape Hatteras to make a break for the Bahamas from the north instead of eventually from the west.  The winds were forecasted as light and erratic which would probably mean more motoring than we’d like.  On the other hand, big winds and fierce conditions around Cape Hatteras and Cape Fear were much more concerning to us than no wind at all, so it looked like our chances of getting pummeled were minimal.

With the risk for high winds off Hatteras being minimal, one of the biggest challenges would be deciding where to cross the Gulf Stream, which widened considerably and became much more erratic just off Cape Hatteras.  If we were really lucky, it looked as though we could even possibly catch the advantage of a favorable minor countercurrent pushing south towards the Bahamas once we crossed 33ºN.

The relentless storm fronts and inconsistent winds we’d been experiencing already made Option One seem like an arduous undertaking; it would take forever to work our way south.  Option Two was the obviously appealing choice; quick and direct.  But once we cleared Cape Hatteras, there was a lot of empty space to cover.  We’d be two to three hundred miles offshore in an ocean two to three miles deep… daunting.  Five to six days estimated.  There would be no where to duck into if the weather turned surly.

Not a perfect weather window for sailing but as close to a guarantee as we could hope for in the weather forecasts that no major front would be passing between the Chesapeake Bay and the Bahamas for the next seven days.

Option Two it is.