No description (or photo, for that matter) can accurately capture the full range of colors reflecting different depths of the gin-clear water in the Bahamas – white, emerald green, turquoise, sapphire blue, indigo, brown, black.  Again and again, we pause to reflect just how unique the water here actually is. 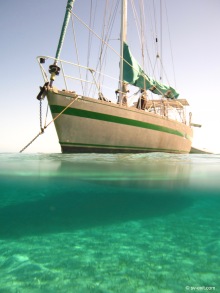 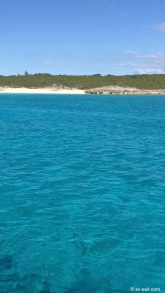 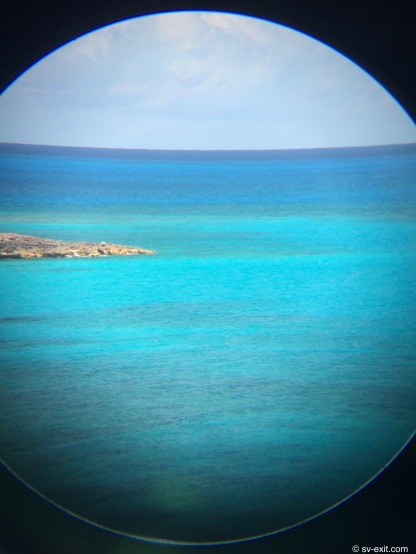 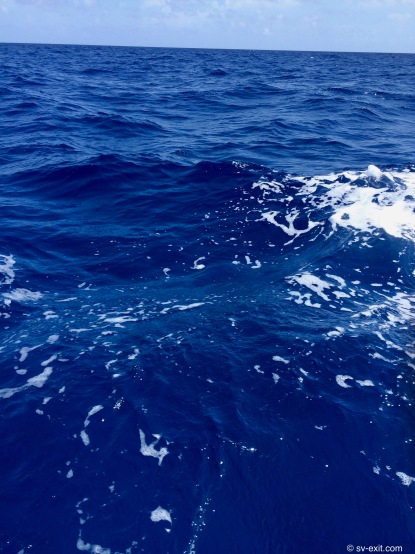 Our approach to the Exumas required us to, once again, cross the Great Bahama Banks.  This strange stretch of shallows, miles and miles of sandy bottom rarely deeper than twenty feet interspersed with rocks and coral heads, presents a continual exercise in navigational awareness.   Large sections are little more than underwater sandy deserts with very little to be concerned about.

Other areas are more like minefields.  Scattered with rocks and coral, some lurking just below the waterline, these areas must be traversed with great caution, and only under certain sea and light conditions.  For those who pay attention and read the water, there is limited concern.  For those who program waypoints into a plot charter and rely only on autopilot, there can be a world of grief.

We made for Highborne Cay, thirty five nautical miles to the southwest of us, on March 31.  Ten knot breezes allowed us to sail for more than five of the seven and a half hours the journey took, and very little of that was spent in areas requiring one of us to stand lookout on the bow.   This was the first time we had done more sailing than motoring since leaving Florida and we both thought it was long overdue.

Once we arrived at Highborne Cay, we were almost immediately baptized into two Bahamas traditions. First, the practice of certain visiting boaters to drop anchor as unnervingly close to you as can be imagined, for no apparent reason.  Second, the ancient Bahamian tradition, now apparently being revived almost exclusively by Caucasian catamaran couples, to herald the arrival of sunset with the sometimes successful trumpeting of a conch shell.

We had been told by one Floridian catamaran owner who had been coming to the Bahamas for the last eighteen years that it was, in fact, he who was, singlehandedly, reviving the conch shell blowing tradition.  He had the tool on his boat to properly make the hole… there was good depth along the mangroves to explore… the Bahamian military forces stopped here regularly to say hi to him… he caught more lobsters than all the other boat combined… a fifteen foot hammerhead had recently swam up to him in this bay… blah… blah… blah…

When we do meet cruisers who have a like mindset, it can be an incredible experience.  As greenhorns, we gain amazing amounts of insight, learning best often just by listening.  Some of the best memories come from simply sitting in the cockpit, enjoying sunset drinks, speaking with kindred spirits.  And it’s with those people that interesting conversations emerge – beyond the Where are ya from?  Where have ya been?  Where are ya going?  Here’s our boat card…

Waiting for favorable sailing winds, we spent three nights anchored at Highborne Cay, though we never had the inclination to go ashore.  We saw lots of other dinghies racing from one boat to another, obviously already well acquainted with each other.  For some reason, we rarely felt the attraction of interacting with a lot of the people surrounding us.

Not sure if this was an anti-social tendency of dirt-dwellers we still needed to be weened of…  James would say we were simply ahead of the curve… good for us!

We were surrounded by a couple of dozen other monohull sailboats, catamarans, and power trawlers, which made it quite claustrophobic.  But, without any doubt, it was the behemoth and arrogant displays of unlimited wealth embodied in the floating palaces of decedent excess called Mega-yachts that truly tested one’s resolve not to vomit or commit physical violence. 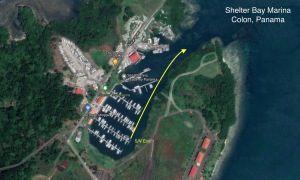 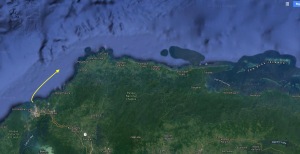