“I have some very bad news…”

Noooooooooo!  As the fading echoes of a silent scream still rattled around in my head, the man behind the desk in the Port Captain’s office looked back at his phone and continued.

I was now certain we were being thrown out of Panama.  But… what the fuck had just happened?  Things seemed to be going so well up to that point.

We could almost taste the freedom.  It was the morning of April 2nd and our fourteen day quarantine was complete.

An official boat, rather beat up on the sides but identified with “POLICE” in big letters on top of its canopy, pulled up slowly alongside us.  It was right on schedule based upon what the Port Captain had told us on the VHF radio the day before.

Two health workers in crisp hospital scrubs and masks, plus one captain in a faded t-shirt… no mask, but a baseball cap.

They asked, had we experienced any symptoms over the past two weeks?

No (we indicated we have a thermometer and had been checking regularly).

They confirmed our temperature by pressing a device of their own against each of our foreheads.  Any potential facial expressions were hidden behind their surgical masks; however, both numbers that popped up on their thermometer display appeared to elicit a nod… a good sign, we thought.

After a few more questions, both health workers seemed satisfied that everything was in order.  The boat captain seemed content… a good sign, we thought.

They indicated that the Immigration Officer would be out in about half an hour.

A different boat pulled up slowly alongside us.  It was right on schedule based upon what the health officials had told us thirty minutes ago.

Three immigration officials in crisp uniforms and masks; one captain in a faded t-shirt… no mask, same baseball cap.

One, who appeared most senior in both age and rank, spoke very good English.  A downright chatty guy.  He thumbed through our passports.

The second guy had an automatic weapon.  But this time, he seemed more like a color guard for show, rather than muscle to flex.  Not a bit chatty.

The third guy – tall, skinny, features hidden behind a surgical mask.  His job:  go belowdecks and take a look around… inspect the fruit… ask about the contents of the fridge and freezer… peek into the head…

A short time later, we are handed back our passports, stamped with fresh Panamanian ink indicating we’re legal here for six months.  Nice… a good sign, we thought.

We are then politely informed that we owe one hundred dollars, and given instructions to take our dinghy to the Port Captain’s office to receive our cruising permit.

An hour later, we pulled up to a rickety wooden dock in our dinghy, next to the massive cement ferry dock, right beside the Port Captain’s office.

Eric, owner and captain of M/V Sprezzatura, along with Katie, his crew, had tied off his dinghy just moments before our arrival.  We had engaged in endless conversations over the past two weeks, yet, we had never physically been in the same place.

And, though our recently shared harrowing experiences would previously have warranted handshakes and hugs — now, we breached social distancing protocol only far enough to exchange elbow bumps.

A whole new approach these days.

The woman sitting at the Port Captain’s desk was polite, but stern.  Not a word of English.

Possibly the angry woman behind the surgical mask in the Navy boat fourteen days earlier…?

Probably best not to ask.

Polite, but stern.  Quite alright.

After a large number of questions… clarifications… forms completed, signed, and stamped… the Port Captain appeared satisfied with everything, and informed us that our cruising permit would be available the following morning.  A good sign, we thought.

The following morning we returned to the same rickety wooden dock.  I entered the Port Captain’s front office, eager to make the final exchange:  a final two hundred  dollar payment for a piece of paper stating S/V Exit could legally remain in Panamanian waters for one year.  Meanwhile, Kris did a bit of a reconnaissance around the area.

Inside, Morgan was an exceptionally friendly guy at the desk just outside a glass office cubicle.  No mask.  He wrote down his name and number on a piece of a paper and said to call if we needed anything.  He apologized for all the earlier drama.  Wow.

Inside the glass office cubicle, the process was painfully slow.  Certainly, not just picking up a completed document.  The guy inside had a mask on.  I had to come in to provide some information, then step back outside the door.

He was friendly enough.  It just took forever for him to work through the triplicate form he slowly pecked away at on none other than — I shit you not — an antiquated Brother typewriter!

He seemed to be distracted by his phone, constantly referring back to it, engaging in some sort of back and forth texting.

Eventually, he motioned for me to come back in.

I stood in front of his desk.  He looked up from his phone.

“I have some very bad news…”

Noooooooooo!  As the fading echoes of a silent scream still rattled around in my head, the man behind the desk in the Port Captain’s office looked back at his phone and continued.

I was now certain we were being thrown out of Panama.  But… what the fuck had just happened?  Things seemed to be going so well up to that point.

His gaze returned to me.  It was unnerving to have his expression completely hidden behind the surgical mask… like The Executioner.

“… the Minister of Health…”

“…has just informed me…”

All this time we spent… fuck.

“…that you will not be allowed to move from where you are anchored.”

Finally, words sputtered out of my mouth.  “But… our cruising permit is okay?”

“Yes,” he said. “The Minister of Health has just said that nobody can move from where they currently are anchored.  Is that okay?”

It’s not like there were many options to choose between…

I decided against telling him that was unacceptable and that we would be leaving immediately.

“Of course,” is what came out of my mouth, realizing that I was now the only person among more than fifty boats at anchor who absolutely would not be able to say, “I didn’t know we weren’t supposed to move… oops.”

Out of the quarantine and into the curfew.

Or… out of the fire (potential ejection from Panama) and into the frying pan (literally, the deck of our aluminum boat is one hundred twenty five degrees in the sun).

One hour allowed in town, with thirty minutes on either side to get to and from your home.  My time 9am on Tuesday, Thursday, and Saturday.  Kris’ time 10am on Monday, Wednesday, and Friday.  No excursions together, at least for now.

Sometimes, however, after twenty three hours in tight quarters lockdown, that hour needed to be fully utilized, whether shopping was needed or not.

The country-wide prohibition on alcohol sales was being taken very seriously by grocery stores.  In Bocas Town, any attempt to purchase beer, booze, or wine (ignoring the multiple signs prohibiting the sale of liquor) was met with a shaking head.  No dice…

However, one grocery store on the small island of Cayo Carenero, right next to us, was a bit more understanding of the situation.  Bottles of booze, cans of beer, or boxes of wine discreetly brought to the counter in a shopping bag were quietly rung through the cash register.  My surgical mask doubled as both a preventative health tool as well as a cloak and dagger prop…

Still, we had already learned that it was best to stay off the radar.  Minimizing transgressions that could land a person in the spotlight seemed rather prudent, given the circumstances.

Despite that, I managed to gain the attention and ire of the patrolling police boat on Easter afternoon.  I was treading water, no more than fifty feet in front of our boat (in what I would consider the front yard), actually checking our anchor ten feet below me.

Not a word.  It wasn’t necessary.

It was Sunday.  Twenty four hour curfew for everyone.

A week in the life:

Boxed wine in the cockpit 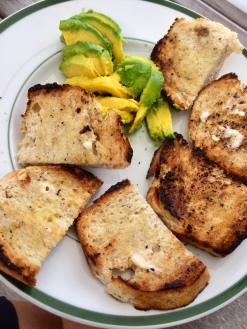 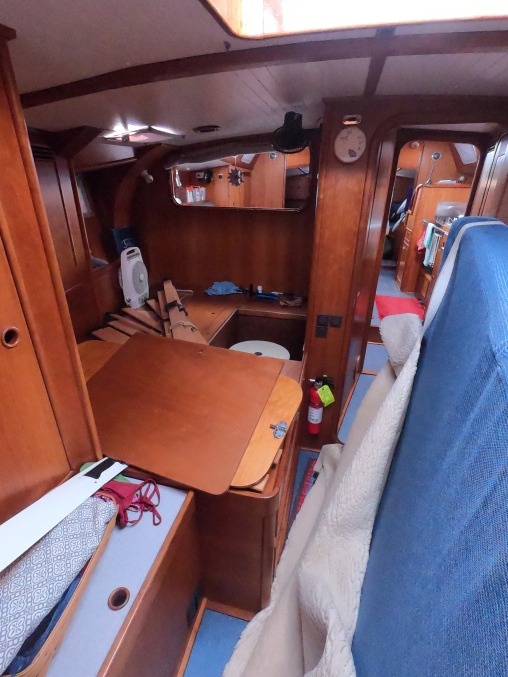 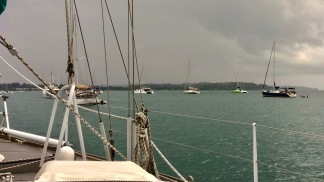 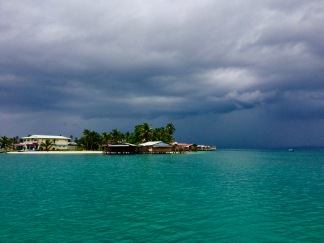 The added drama of black & white

One thought on “Out Of The Fire, Into The Frying Pan”