Nearly four months after arriving in Bimini, we are finally departing the Bahamas.

Our insurance policy requires that we be north of Jacksonville, FL before July 15, to avoid hurricane season within the Bahamas, Caribbean, and the Gulf of Mexico area.  We have learned that hard deadlines need to be approached with a great deal of buffer factored in, just in case of weather issues, potential mechanical difficulties and other unforeseen concerns that could cause serious delays.

While the Bahamas hasn’t achieved that most highly regarded and coveted status of “magical” (reserved for places like Borneo, French Polynesia, Micronesia for example), we have had some amazing experiences.

Some of the standout highlights would have to include:

Ultimately, the fact that this has been our first real shakedown cruise aboard our own sailboat was truly the most magical aspect of this journey.

Do we see ourselves returning to the Bahamas?  I could certainly see that happening.  But it would more likely be in transit to somewhere else.  The opportunity to return as even more experienced and confident sailors, plus the ability to circumvent Florida entirely, definitely has an appealing sound to it… but that would be an entirely different chapter.

Our departure from Marsh Harbour signaled a ready to launch status.  We were re-provisioned, full of fuel and water, and prepped to go off-shore as soon as the call was made.

From Marsh Harbour, the plan was to press northwest.

The bigger decision was yet to be made….

Do we:  1) push all the way to the northwestern edge of the inner banks at depths of ten to twenty five feet until we reached the tip of Middle Shoal nearly one hundred thirty miles away and jump over to the Florida coast?

Or do we:  2) find a spot somewhere in the next fifty miles, before Little Abaco Island disintegrates into an endless stretch of reefs, that we can jump outside to instant depths of one hundred to five thousand feet, and set a trajectory directly for St. Marys, on the Georgia-Florida border?

On the day of my birthday, while having cocktails in the cockpit, we had felt a great deal of sympathy towards our neighbor, a young man single-handing a thirty-some foot traditional sloop I couldn’t identify, who was hoisting himself up the mast in a Bosun’s chair.

Every time a power boat came by at a speed excessive enough to create a substantial wake (which seemed to be every thirty seconds), this poor bastard would pitch back and forth at the top of his mast like a fly sitting atop an old-school tick-tock style metronome, all the while yelling out to the passing boat, Slow the fuck down, asshole!  This is a no wake zone!

The following day, I couldn’t help but to think of him as we sailed clear of the Marsh Harbour Channel markers and the VHF crackled to life one last time.

The final words we heard coming from the speaker were anonymous.  Proper radio etiquette had been abandoned… no specific vessel being hailed… the person doing the hailing not identifying their own vessel…

Just a frustrated captain issuing the angry statement across the airwaves:  Rules of the road mean nothing if you’re an idiot!

It was the last thing we heard leaving Marsh Harbor and it seemed rather poetic, in a salty way.

From Marsh Harbour, our intended destination, not quite thirty miles to the northwest, was Crab Cay, just south of Manjack Cay.

This meant we had to pass through Whale Cay Cut, a short stretch that exposed us to the open ocean conditions.  The cut carried a brutal reputation for its’ ability to throw an unrelenting stink at unsuspecting boaters.  We saw nothing that concerned us.

Then, as we tacked around, positioning ourselves through the cut relative to two catamarans that were approaching the cut from the opposite direction, a fast moving squall passed through.

Winds jumped up to an excess of twenty five knots. We furled in the genoa and fired up the engine to make certain we had adequate control through the narrow cut.

As lightning detonated all around us and we passed through Whale Cay Cut, things suddenly seemed to take a Twilight Zone twist.

There was a moment of panic as we watched the wind speed indicator, which had risen steadily from ten knots to twenty five over the past fifteen minutes, now begin to climb higher and higher… It rose from twenty five to thirty…

Then from thirty to thirty five….

Then from thirty five to forty…

Then to forty five…

This didn’t seem possible.  Yes, it was blowing like a son of a bitch out there.  But, the wind hadn’t jumped twenty knots in the past sixty seconds.

And then the number on the wind indicator kept climbing…

Fifty… seventy five… one hundred plus… we took a photo with the display showing in the 130’s… then almost 210… it topped out around 220 knots.   What the fuck?!

We were later told that this was probably the result of electrical interference from the nearby lightning storm.

At the time, passing through the cut as the storm unleashed itself and the wind indicator went mental, it all seemed like another Bermuda Triangle moment.

Fortunately, as the storm passed, so too did the drama.  We were able to let the genoa back out and kill the engine.

But, before long we were rolling our eyes as winds that had died down to less than five knots challenged whether we could continue much further without firing the engine back up.

We were thankful when Crab Cay appeared.  Shortly after we were safely at anchor. 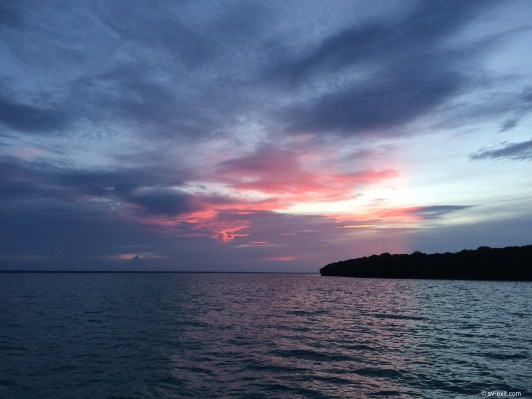 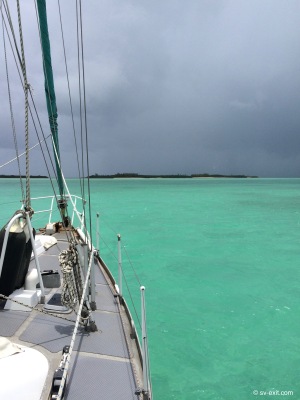 Prepping for an offshore passage is quite a process.  Properly getting everything physically ready also seems to help get us mentally ready.  Stowing and/or securing everything above and below deck; getting meals ready; monitoring weather; engine checks; course plotting; preparing for potential sail changes; it goes on and on… and different weather expectations initiate different Def-con status levels.

In addition, different decisions equate to different risk levels, expectations of conditions, and costs/benefit analysis.  For example, we have a number of options with our dinghy… Option#1 – Tow the dinghy behind us; easy but high risk of loss or capsize.  Option#2 – Hang the dinghy from the davit; ok for good weather but a breaking wave could take out our entire arch.  Option#3 – Deflate dinghy and secure on deck; probably the safest option but a huge pain in the butt and really clutters the deck.  Option#4 – Cinch the dinghy up against the arch to prevent breaking waves from swamping the dinghy and help protect the cockpit.

After an extra day of getting things ready aboard Exit while still anchored at Crab Cay, we made one final push of another eleven miles to Powell Cay, setting us up to depart through the nearby inlet the following morning.

We had finally decided on Option Two – jump north through the reefs from the last of the Abaco cays and make a run for the Georgia border.

This would give us nearly a straight shot to the St. Marys entrance.  Cumberland Island was about three hundred fifty miles northwest of our current position at Powell Cay.  Over a hundred miles further than our longest passage so far, which had ironically been after our last our last departure from Cumberland Island in February, when we ended up stuck in Cape Canaveral with fuel tank issues.

The distance was not really a concern.  Our biggest trepidation came from the uncertainty of possible sudden thunderstorms and squalls, something we had gained a healthy respect for over the past few months.

We’d be in much more exposed open seas, well farther from any land mass.  Any thunderstorms or squalls that materialized right on top of us would just have to be dealt with.  There would be no bay or harbor to duck into, providing us a safe haven to await the passing of any nasty weather.

With a conservative approach, keeping a vigilant watch in the cockpit, checking our radar often, and reefing our sail immediately if something looked like it could be developing, we felt confident our decision was sound.