The magic of a lifelong friendship is both a rare and precious treasure.  In some ways, it transcends family relationships in that it is a chosen endeavor requiring tremendous effort and even sacrifice, as opposed to a genetic certainty.

Shannan and Vicki Schulhauser are two such lifelong friends.  I have known Shannan since 1980 as a classmate, a bandmate, and a best friend.  Likewise, we have known Vicki for more than thirty years.

They are the only two people who traveled halfway around the world to visit us while we were working as dive instructors in Borneo.  It only seems fitting that they be the first guests we have staying aboard Exit; and, once again, they have to travel thousands of miles to do so.

Our strategy was to arrive in Nassau well ahead of them, in time to have an opportunity to scope things out, do some reconnaissance on potential places to go, and become more familiar with the area in general.

We did make it to New Providence in advance of their arrival.  However, the same winds that threatened to trap us at Fort Lauderdale finally caught up with us and, for the entire week, we were unable to get out of West Bay.  Furthermore, West Bay’s remote location prevented us from even venturing into Nassau itself to explore ahead of time.

In fact, we had just arrived at Harbour Central Marina in Nassau and were still securing our dock lines as Shannan and Vicki’s plane touched down at the Nassau Airport.

We had planned on spending a few days at the marina, allowing Shannan and Vicki to acclimate to Exit.  As this would be their first visit ever aboard a sailboat, we thought it prudent to take things slowly.  A bit of time, secure in a slip, would give them a chance to get used to simply being on a boat – boat movement, boat noises, boat space, boat operations…

Nassau is not exactly representative of the tropical Bahamas paradise you might find on a post card.  Take a city of 250,000 people with a distinctly high crime rate, add a smidgeon of Bahamian culture, and drop in ten to twenty thousand tourists who have just stepped off one of five cruise ships sitting in the harbor for a few hours as well as one of the densest congregations of multi-million dollar mega-yachts I have ever seen and, in a nutshell, you have Nassau.

It became easy to distinguish at what point of their cruise people were at by the color of exposed skin walking around… lots of fish belly white if the cruise had just begun versus painful looking lobster red if the cruise was nearing an end.

It’s impossible to get any real sense of the true size of the cruise boats themselves without seeing them in person.  As we passed by them in the harbor, we were flabbergasted… enormous and audacious structures ten stories high that occupied the equivalent of a city block, each carrying three thousand or more guests.

Sadly, the cruise ships must be a large percentage of the economic base of Nassau, and it shows when you walk down the sidewalk, like an eternal spring break destination.  Each store, bar, restaurant, and street vendor has a small window of opportunity to entice every person walking past to leave some money at their establishment before climbing back on the cruise ship and taking their money on to the next port.  Everyone is both greeted and treated like they are on a cruise… and most of them are.

We were told by many locals how frustrating it can be, as many of the cruise ships pack their guests on pre-arranged tours and activities, never venturing further from the boat than an awaiting shuttle.

Likewise, the mega-yacht crowd provides an equally unique population to be observed.  Surrounding us at the marina at any given time were no less than half a dozen floating pleasure palaces, ranging in value from probably three million to well over twenty-five million dollars, often with only the crew aboard, awaiting the next rendezvous instructions from the owner.

Though it was a nice break to enjoy restaurant food, bar drinks, and a bit of wandering around, by day three, we were more than ready to say farewell to the marina, as well as Nassau.  We looked forward to getting back at anchor, using West Bay as a launching point to further explore the area with Shannan and Vicki.

Our previous three hour motor from West Bay to Nassau Harbor to meet them had been in fair weather without major waves.  However, the drastic and quick change in depth from over a thousand feet to exposed rock and reefs less than a mile off the beach, in tandem with the wind, generated the biggest swells we have ever encountered as we traversed the coastline.

Though not rough and messy, like five foot waves stacked on top of each other, the swells were more than a little bit intimidating.  Spaced maybe thirty seconds apart, we repeatedly found ourselves at the crest of a massive swell, looking more than twenty feet down into the trough preceding the next swell.  Then we were in the trough, looking up at the next swell as it approached.

It was unnerving enough that we quickly adjusted course to take us a bit further offshore where the swells diminished in size.  To our amazement, we could see surfers much closer to shore, making what looked like suicide runs down the massive walls of water.

Despite encountering no such swells returning to West Bay with Shannan and Vicki aboard, the journey was still enough to make Shannan more than a little green in the face.

While our first day at anchor was comfortable, unfortunately, the weather refused to cooperate with us.

Swimming off the transom

Fifteen to twenty knot winds kicked up for a number of days, making any hope of a day-trip sailing excursion (or even moving to another anchorage) out of the question.

Furthermore, the direction in which the wind was coming from was at a right angle to the swells entering the bay, causing Exit to sit at anchor facing the wind, but take all of the swells directly on our beam.  This resulted in a pronounced and unrelenting rolling of the boat, back and forth from side to side… uncomfortable to say the least.

Considering the fact that Shannan had undergone surgery on both hips over the past two years and was still coping with extensive back problems, it was incredibly difficult for him to navigate around the tight confines of the boat as well as up and down the companionway steps in the best of conditions.  Exit’s continuous rolling motion only exasperated the situation.

Finally, after four days of non-stop wind and rolling, Shannan and Vicki opted for a hotel in Nassau.  We took them ashore where they caught a taxi that delivered them to accommodations on solid ground.

For the next week, the weather remained uncooperative.  Sadly, in the end, we were unable to take them out for even a day trip of sailing.

We spent five additional days tied up at Harbour Central Marina so we could meet with them each day in a more accessible manner.

Ultimately, it was fantastic to see them again, and we appreciated all the effort they went through to meet us all the way in the Bahamas.  However, we couldn’t help but feel like we had fallen well short as hosts at our home for our  friends.

In hindsight, it was truly a learning experience for us regarding having people come to visit us.

While Nassau was a logical hub to access from the U.S., it really did not provide a very conducive location for a boat at anchor.  West Bay was in the middle of nowhere, making it nearly impossible for daily rendezvous; and Nassau Harbor was far from ideal for anchoring.  Inside the bay, accessibility to land by dinghy was difficult; furthermore, currents, constant boat traffic, and very poor holding (a number of boats trying to anchor just outside the marina dragged at night) meant that paying to stay in a marina was really the only viable option.

Once committed to staying in the harbor, we lost most of the ability to attempt short, enjoyable daysailing trips.  Strong currents limited the windows of opportunity to get in and out of the marina slip.  Even if the wind was favorable, just getting out and back into the harbor (past the cruise ships, boat traffic, and outer channel) required a couple of hours at the least.

Our lack of familiarity with the area made things incredibly difficult.  We learned that, in order to host visitors, we would need ample time to first suss a place out.  Given that opportunity, we could have made better decisions.  This includes both land and water based familiarity. 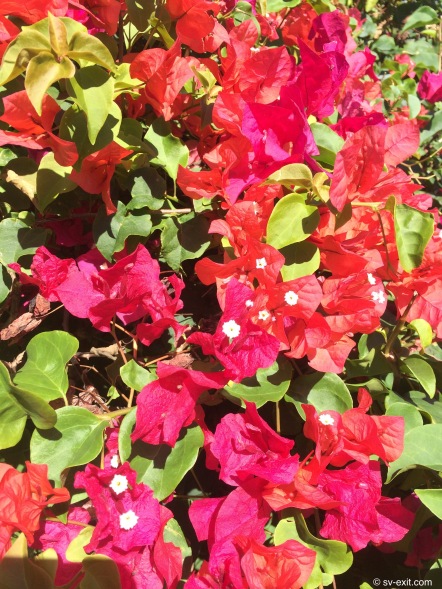 In retrospect, it would have made much more sense having guests unfamiliar with sailing to stay at a hotel from the beginning, initially utilizing a safer strategy of short day trips instead of total immersion.  Already knowing where we could go, depending upon conditions, to allow them exposure in small doses would have probably given them a much more enjoyable sailboat experience.

Instead, without that foresight and knowledge, we were flying blind.

In the future, we need to choose a location in which we already have a great deal of knowledge, or give ourselves far more time to do the reconnaissance necessary so we can plan and adjust much more effectively.

Hopefully, our shortcomings as hosts for Shannan and Vicki on this trip don’t dissuade them from another visit in the future.  They are our lifelong friends and we eagerly look forward to every opportunity to see them.

A friend is a friend, and nothing can change that, but it’s also extremely important to recognize that not all friends are sailors themselves, or even want to be.  Given that fact, we sincerely look forward to having them come to visit us again at some point in the future.

As is the case with so much aboard Exit, we learn an immense amount every time we try something for the first time.  But we have to try in order to learn.

Thanks to Shannan and Vicki for being our first time guests… next time around we promise more sailing and less rolling!