The Great Bahama Bank provided us a preview to some of what would be in store for us in the Bahamas.  Learning to accurately read the water is a navigational necessity here.

Though there were no real obstacles to deal with, we had our first exposure to the colors that we would have to become familiar with in order to successfully (and safely) get around… every shade of blue interspersed with variations ranging from white to black.

White: can be an indicator of sand with good holding for potential anchorage or a alarm bell for shallow depths.  Black: can be merely the shadow of overhead clouds or reefs and rock somewhere below.  They say watch for brown that’ll take you down… a warning of something just below the waterline that puts us at risk for potential grounding (or merely sea grass ten feet down)… confusing.

The myriad of colors can be very helpful to reveal what is hidden under the water’s surface, ultimately often providing a more definitive indicator of where to go (or where not to go) than our charts, which seem to always have a intimidating array of underwater rocks and obstacles noted, some of which are dangerous and some of which are always at least ten feet deeper than our draft… or the colors can prove quite vexing to interpret.

Prior to studying our Bahamas charts, we were unfamiliar with the initials “VPR” .  Yet, “VPR Apply” seems to be plastered everywhere we look on these charts.  Standing for Visual Piloting Rules Apply, it is a constant reminder that, in the end, it is your eyes that are to be trusted more than any charts.

It dumbfounded us to hear that some captains set a course on their chart plotter, even going so far as to program in turns at specific waypoints, and then tune out the outside environment.  Relying solely on the autopilot, the accuracy of their charts, and the assumption that everyone else on the water will stay out of their way to get them safely to their destination sounds to us like a perfect way to lose your boat.

We knew it would take us at least a second day to reach Nassau on the island of New Providence, requiring us to anchor overnight somewhere out on the Great Bahama Bank… a somewhat surreal prospect.

Awaiting a slack tide which allowed us to avoid a sketchy approach in currents to the fuel dock we needed to get diesel at, had meant for a late start.  Consequently, we only made about thirty miles on our first day before dropping anchor just before sundown.

Just shy of Mackie Shoal, Exit sat in twenty feet of water.  We would have preferred closer to ten feet, but it was a higher priority to find a spot with enough open sand to keep our anchor chain clear of coral heads and sea fans which were scattered all about.

A single sailboat far off on the horizon, also at anchor, was the only other sign of human presence besides ourselves.  Otherwise, it was water as far as we could see in every direction.  The nearest land to us was Bimini, thirty miles behind us.  Ahead of us, forty five miles of ocean separated us from anything rising above the waterline.

Words fail to convey just how strange it was to be at anchor in the open ocean. 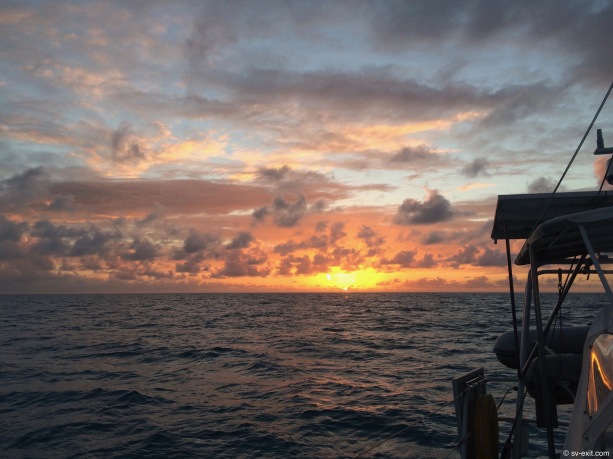 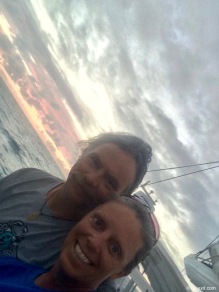 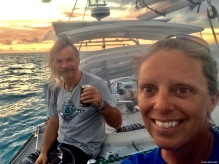 Unfortunately, cloud cover prevented what we were sure would have been an unbelievable view of the stars so far away from any lights.  Nonetheless, we were happy to take the relatively calm sea conditions we found ourselves in. We also chose to heed earlier advice we had been given, and left our transom light on all night to help illuminate us, hoping to avoid being run down by a random Bahamian freighter potentially passing in the night.

The following morning, we were pleased to find ourselves not only in the same location, but also fully intact.  In fact, we had not seen a single boat on the move throughout the night.

Though our second day crossing the Great Bahama Bank was largely an uneventful forty five mile straight line, it also marked reaching the milestone of two thousand nautical miles of travel aboard Exit!  That night we had celebratory anchor drinks in the cockpit at the edge of the Bank, just off the North West Channel on the fringe of the Berry Islands. 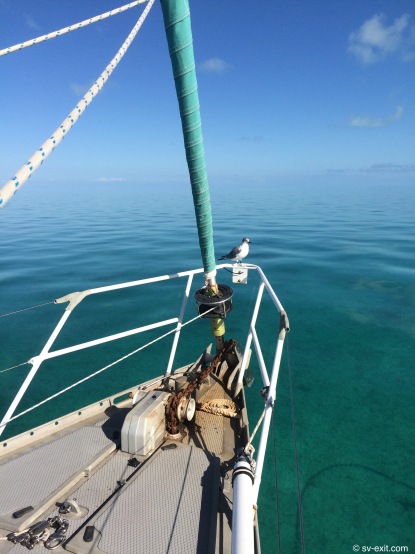 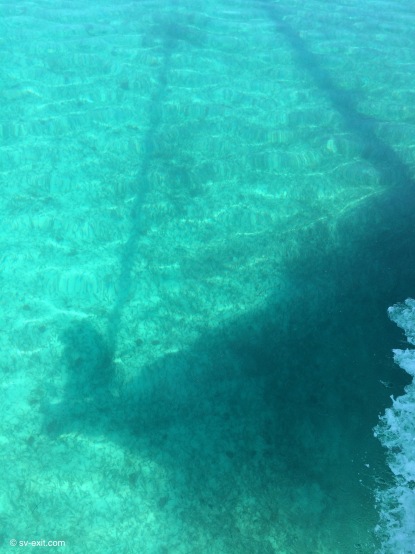 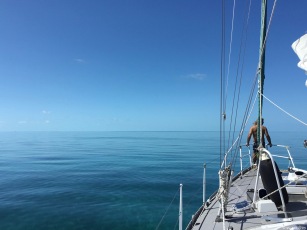 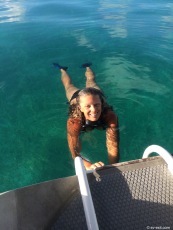 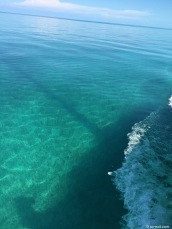 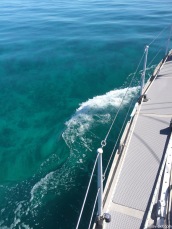 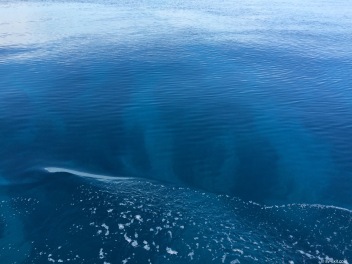 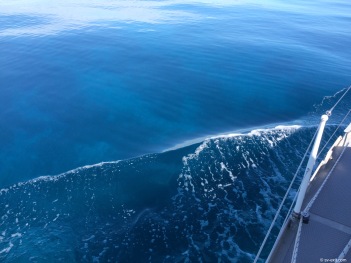 …more than fifty feet below

In the morning, we were rewarded with visits by two large nurse sharks and a barracuda just after raising anchor.  As we crossed into the channel, the water beneath us underwent a breathtaking and dramatic shift in color.  Brilliant turquoise quickly gave way to an extraordinary ink-blue as the water’s depth plummeted from ten feet to fifteen hundred feet in only minutes.

With both time and the weather now on our side, we chose to spend an extra night at anchor just off of Chub Cay before making our final push for New Providence.

Between Chubb Cay and New Providence, we crossed another unique body of water known as the Tongue of the Ocean, a shelf that begins around seventy feet and plunges quickly to depths exceeding nine thousand feet in places.

While it feels no different aboard Exit being in ten feet or ten thousand feet of water, it was remarkable to contemplate the fact that, only eight weeks before, we had been intimidated at the prospect of being two miles offshore.  Now, we had nearly two miles of ocean stretching underneath us to the seabed! 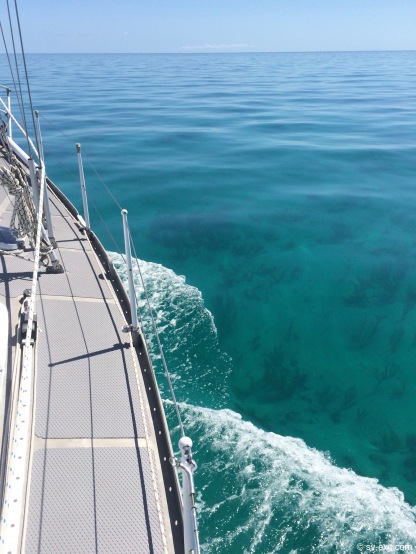 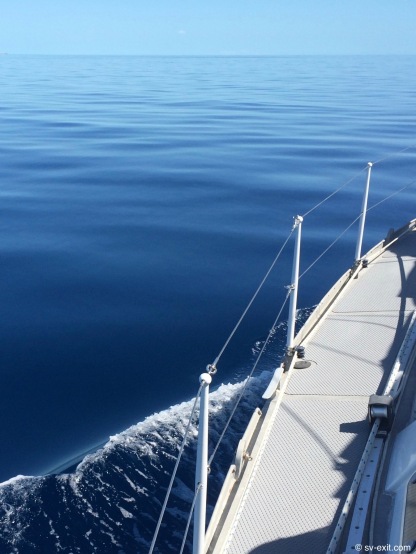 With clear skies, only one to three foot seas, and ten to twelve knots of wind from the East, conditions were as perfect as we could have hoped for, allowing us to sail the entire day without firing up our engine.

By 4:00pm, we were safely inside West Bay at New Providence, enjoying the now-traditional and obligatory anchor beers.

We had dodged the proverbial bullet, which was committing to be in a particular place by a particular time with over a thousand miles to travel in order to make that deadline.  Now, all the pressure was behind us and we could smile and relax.  At times, it had felt like we were running a race atop a forty-six foot long snail.  Yet, in the end, we had indeed made it with a week to spare. 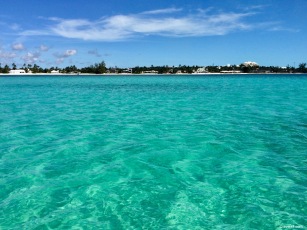 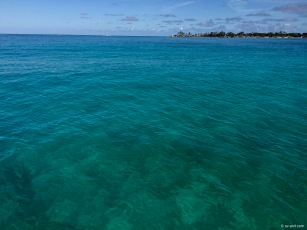 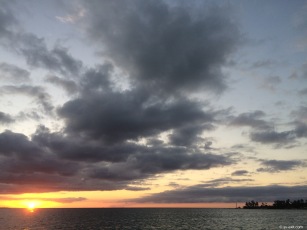